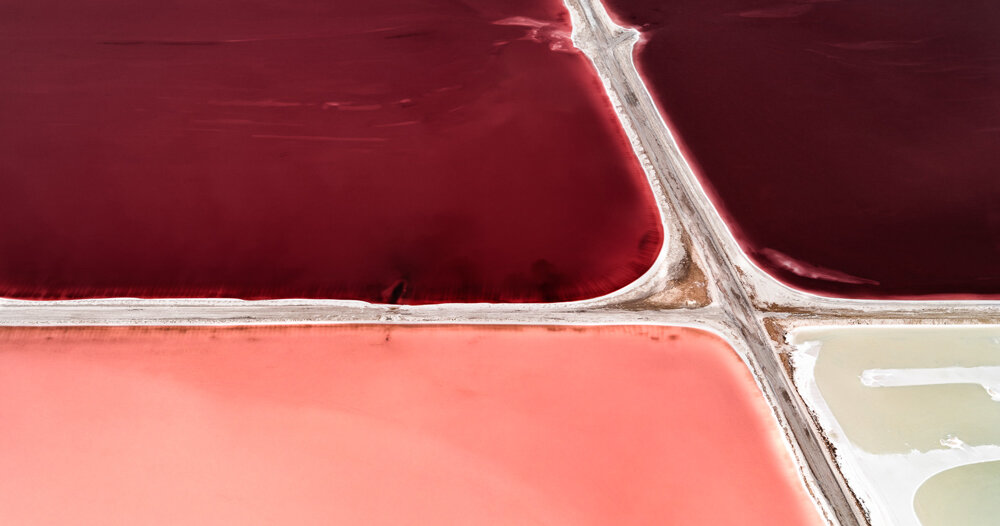 German photographer tom hegen offers a stunning glimpse of the earth’s surface with the third sequel to his salt series. with his partner and helicopter pilot, lars gange, tom hegen captures the images above the great salt lake in utah. the often orthographic perspective, combined with a meticulous framing, results in an ambiguous and graphic field.

the endless man-made salt pans are sometimes cut off from any obvious semblance of human contact, suggesting abstract painting. in other images, the photographer includes elements of context – a road, an electricity pylon – which anchor the viewer in familiarity. the flattened pattern is reminiscent of an illustration or a painting.

landscapes from another world by tom hegen

describing the otherworldly environment captured in his salt series III, tom hegen (see more here) continues: ‘sea ​​salt mining is one of the oldest forms of human landscaping, and it is the oldest method of salt production. salt is a raw material that is now part of our daily lives, but we rarely wonder where it comes from and how it is produced. the salt series III explores these manufactured landscapes, their abstract and painterly quality. sea ​​salt production sites are found all over the world, usually located around shallow shorelines.

‘The artificially created ponds featured in Salt Series III are one of the essential elements in the production of sea salt: the sun and the wind then evaporate most of the seawater from the ponds, leaving behind water to high concentration of salt called brine. each salt pond has a unique salt density and the color of the water indicates the salinity of each pond.’ 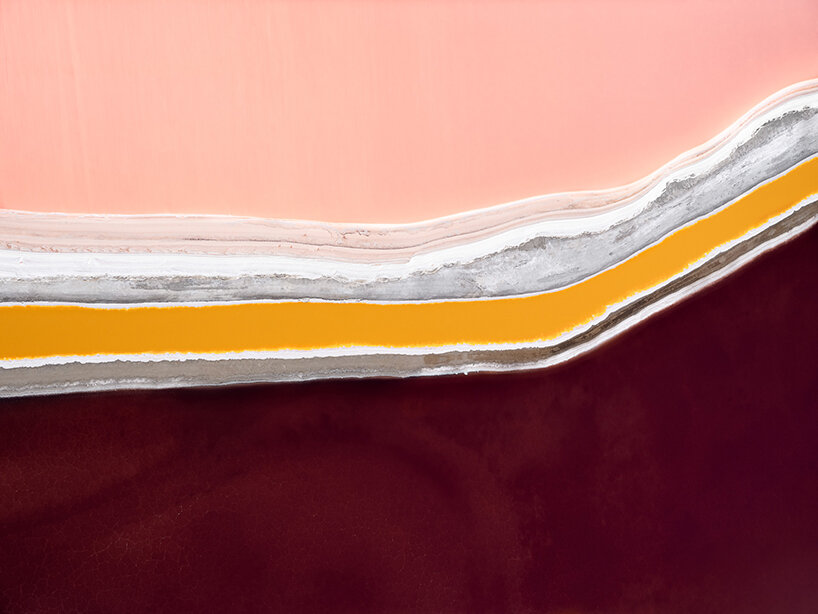 Tom Hegen continues, describing Salt Series III: ‘this microscopic algae, also known as dunaliella salina, is eaten by tiny shrimp. as the water becomes too salty, the prawns disappear, causing the algae to grow and the color of the pools to intensify. as a result, colors can vary from lighter shades of green to bright red. once the ponds dry up, a crust of salt remains. the workers then harvest the salt by carefully lifting the salt crust from the ground.

‘the strong contrasts and geometric shapes of the salt ponds look like abstract paintings. our need to organize everything in a geometric order, to regulate and to have control makes us all – in a sense – designers of our environment. I see myself as a curator, framing the works of art that human presence has created. 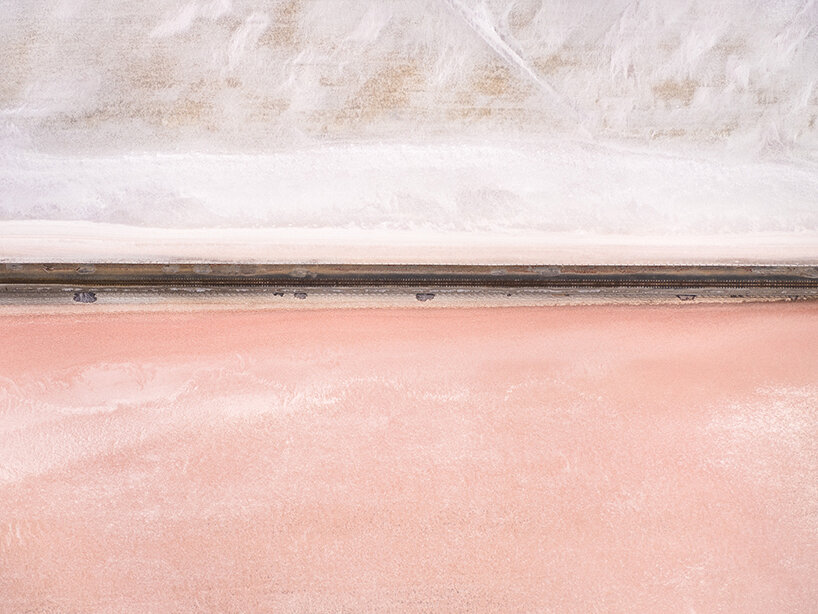 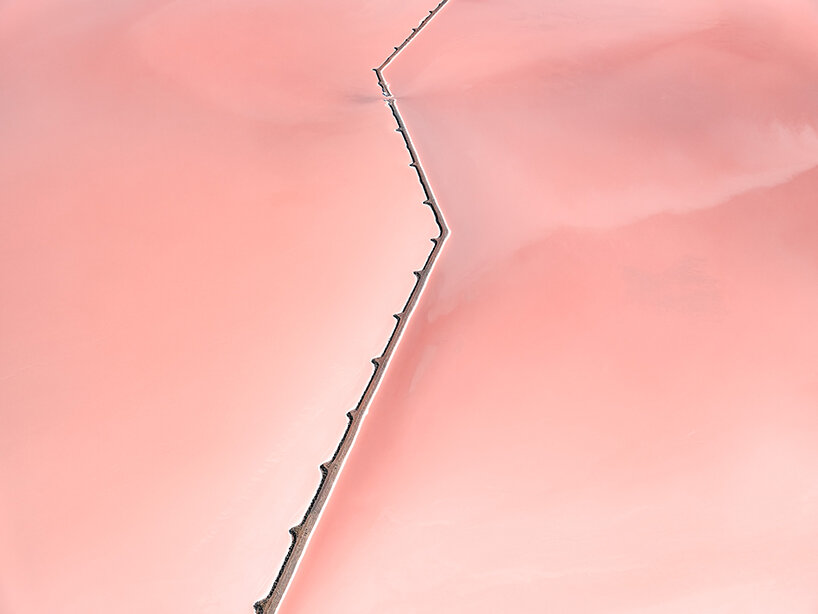 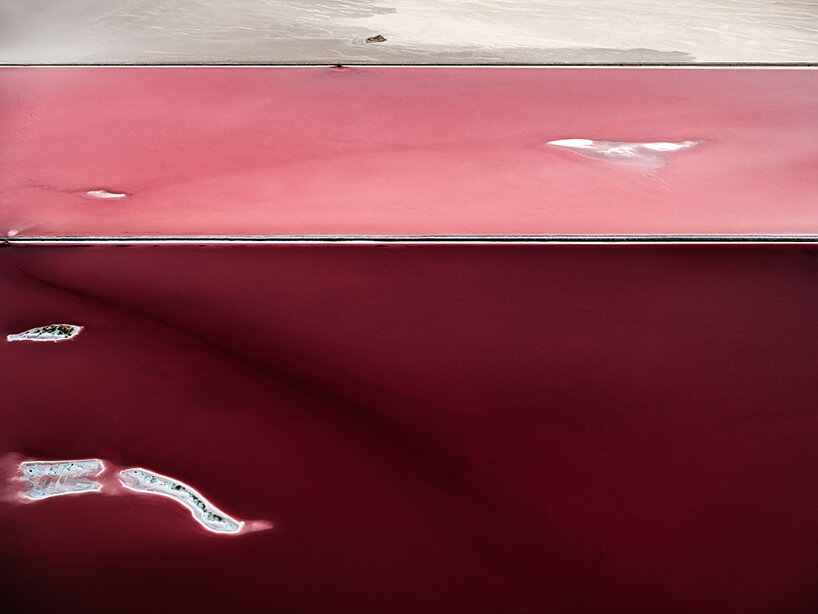