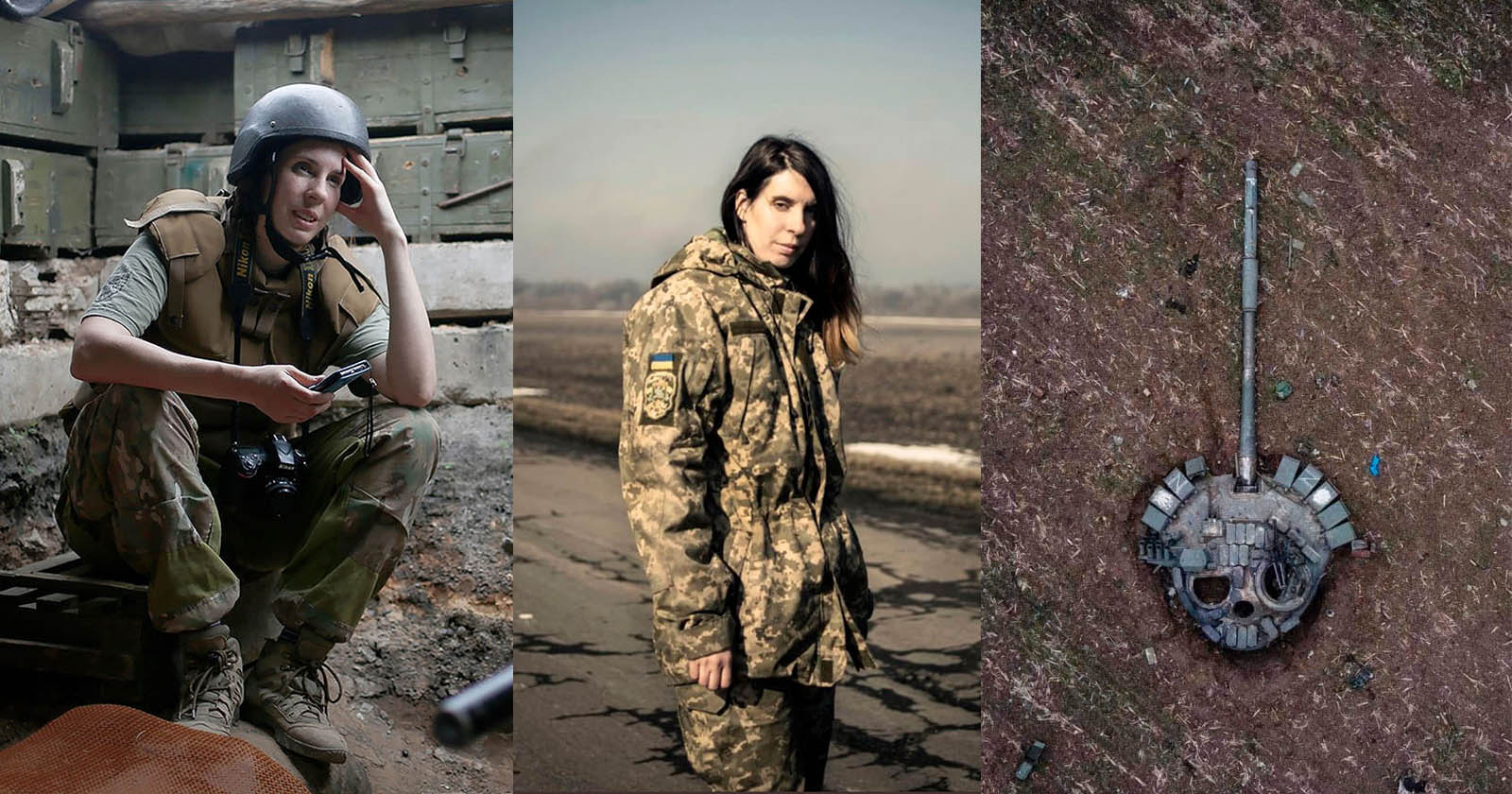 Iryna Rybakova’s photographs have been published in media around the world, but the use of her camera is only part of her job as a second lieutenant and press attaché in the Ukrainian army.

While explaining the circumstances of her most famous photo, Iryna Rybakova inserts a detail that underlines her personal closeness to the Ukrainian war effort.

The image above of a skull-shaped turret from a destroyed Russian tank, the 38-year-old says, was taken with a drone in March after Ukrainian troops recaptured the village of Husarivka in the Kharkiv region after a fierce fight.

“I’m just asking you to remember,” Rybakova said, “many of my comrades died in that battle.”

The photographer then names the soldiers, Yulian Stupak and Oleksandr Garbuz, who were posthumously awarded Ukraine’s highest honor for their actions during the takeover.

Rybakova is one of several Ukrainian army press officers whose job it is to facilitate journalists’ visits to frontline posts. The junior lieutenant of the 93rd Mechanized Brigade stands out for repeatedly capturing his own footage that has become iconic of the war and earned his brigade a massive following on social media.

After the photo of the tank turret “skull” appeared on the cover of The Economist, Rybakova says the image “began to gain popularity. It was turned into a tattoo, placed on album covers and turned into T-shirts.

More recently, an image Rybakova posted in October of an explosion crater inside a cemetery in Bakhmut was widely shared on social media as an example of the limitless physical destruction wrought by the Russian invasion. Such frontline aerial footage is now rare due to the ban on civilian drone use and the high likelihood that an unidentified quadcopter could be shot down from the sky.

Even with her position in the military, she says she has to go through several stages before she can fly her DJI Mavic Air 2.

“I inform the battalion leadership that I will raise a drone in a certain area, and they warn the positions: At a certain time, at a certain place, our ‘bird’ flies,” she says.

Rybakova said RFE/RL she started taking pictures in high school when she used her bathroom as a makeshift darkroom. During the 10 years she spent working as a journalist in Ukraine, she maintained photography as a hobby, using a range of cameras, including medium format film cameras that record sharp negatives and the size of a cracker.

In 2015, when the journalist joined Carpathian Sich, which at the time was a volunteer paramilitary group linked to an ultra-nationalist political party, Rybakova says her photography skills immediately came in handy. She now serves in the Ukrainian 93rd Mechanized Brigade as a press officer and second lieutenant.

Rybakova says that after eight years of low-level conflict in eastern Ukraine, the full-throated invasion of Moscow in February came as a shock.

“To be honest, we in the army thought we were just going to go to the borders instead of the border guards, prepare a defensive line and hold our position for several months,” she says. “[We thought] perhaps there would be provocations with automatic weapon fire, but nothing more.

The photographer and soldier felt all the fury of war. On February 26, minutes after arriving in the newly recaptured town of Okhtyrka in the Sumy region, Rybakova says she plunged onto the asphalt as a Russian plane dropped what she says was a bomb FAB-3000 on a nearby Ukrainian military position, killing many people. people.

The 3-tonne unguided bomb exploded with such force, she said, that it was “like it was an earthquake or a pit in hell” had opened. A photo of the aftermath of this explosion shows a water-filled crater the size of a large swimming pool.

When asked about her most vivid experience documenting the war, the photographer’s response illustrates the ruthless new outlook of many Ukrainians who saw their country ravaged by invasion.

“On the 24th, in Okhtyrka, the boys encountered an enemy column and completely destroyed it,” Rybakova recalls. “They took me to see dead Russians. One of them was officer Ilyasov, of Buryat nationality. He was killed by a 19 year old [Ukrainian] soldier. The corpse was thrown off the road and covered with grass.

“That night I finally slept normally,” Rybakova said when she saw the dead officer. “The sight of enemy corpses calmed me down.”

About the Author: Amos Chapple is a Kiwi who photographs and writes for Radio Free Europe/Radio Liberty. It has been published in most major news titles around the world. You can find more of his work on his website. This article was also published on RFE/RL.

In the lush Amazon, a photographer hopes to document life before it’s too late