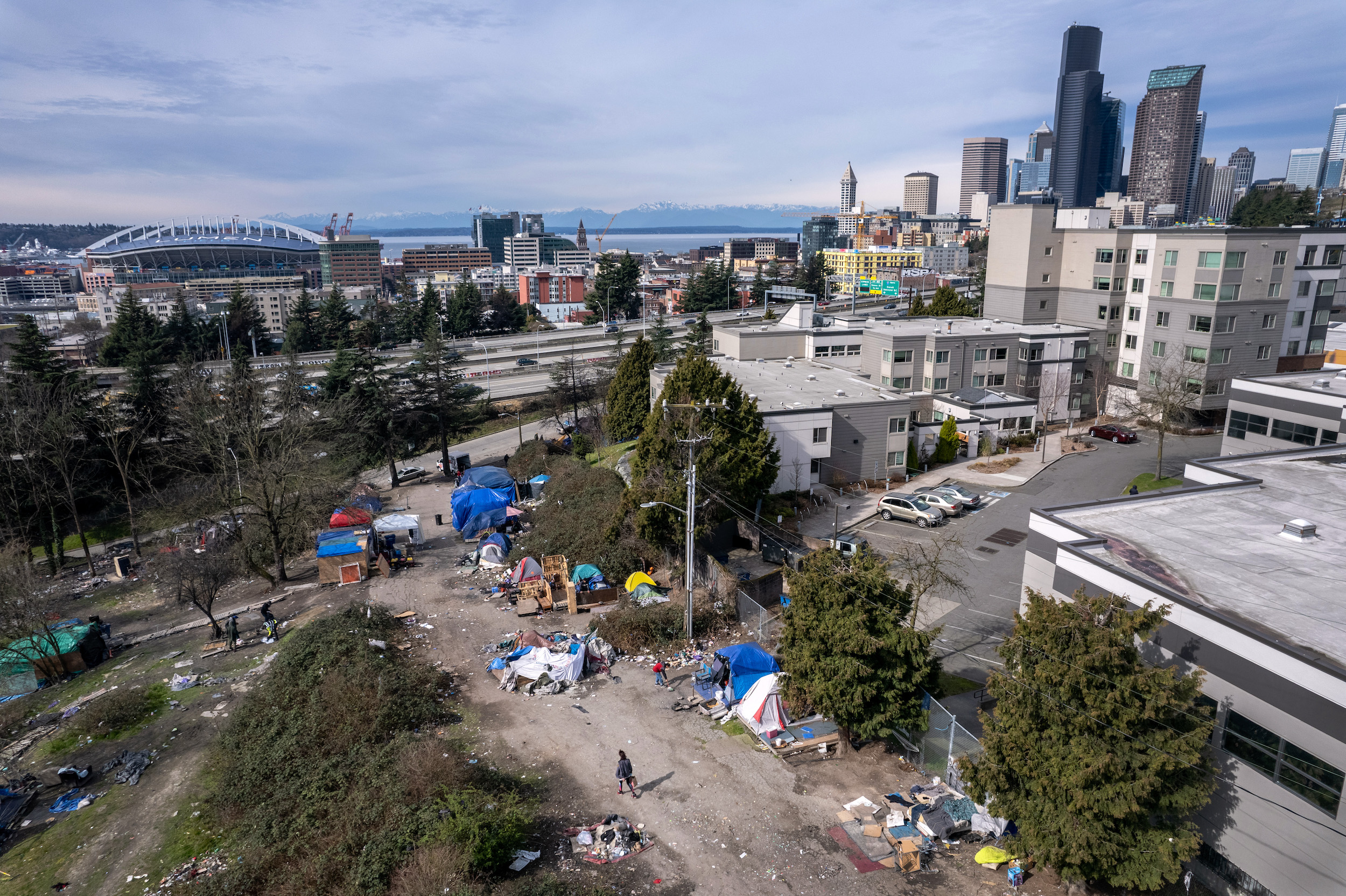 Over a professional career spanning more than 30 years in photojournalism, John Moore has documented the struggles of people in 70 countries on six continents. He covered the wars in Afghanistan and Iraq; the Ebola outbreak in West Africa; the continuation of the COVID-19 pandemic in the United States; and he spent years putting a human face on the issue of immigration to the United States and Latin America.

Moore has been a senior photographer and special correspondent for Seattle-based Getty Images for 17 years. Prior to that, he worked primarily for the Associated Press, where he won a Pulitzer Prize covering the Iraq War in 2005. He served internationally for 17 years, in Nicaragua, India, South Africa , Mexico, Egypt and Pakistan, and has won World Press Photo honors five times, including 2019 Photo of the Year for the iconic image “Crying Girl on the Border”.

Last week, Moore came to Seattle to turn his lens on the city and capture how Seattle is coping with its own issues, including homelessness, the opioid epidemic, crime and pandemic recovery.

“My goal as a photojournalist was to show what those challenges look like,” Moore told GeekWire. “I don’t see my role as promoting political solutions to complex issues, but rather documenting what I see.”

His first visit to the city for photo coverage was two years ago, in March 2020, when Seattle was “zero” when COVID hit the United States.

“Seattle provided a glimpse of what the rest of the nation would soon see,” Moore said of that time. “The Kirkland Life Care Center tragedy was an example of this, but also the way office workers emptied out of downtown Seattle, giving the city the appearance of a ghost town long before other cities Americans.”

Returning to Seattle after two years, Moore made a series of diptychs (below) in particular locations around the city, showing what certain scenes looked like in 2020 and then again almost exactly two years later.

Moore, who lives with his family in Stamford, Conn., is on the road about a third to half of the year. He said the issues facing Seattle are difficult, but not completely unique. Nationwide, many city centers have been slow to recover after office workers returned home to work remotely and businesses that relied on those workers suffered.

Moore’s visit came at the same time as the Downtown Seattle Association released its annual report on the state of downtown and held an event to discuss issues facing Seattle’s urban core. A rise in crime is the most pressing concern that is causing businesses and tech workers to leave the city center for good or debate whether to return.

“The urban crime wave is also a national phenomenon, although in some cities it is more violent and in others more related to theft,” Moore said. The New York Times, for example, reported nine mass shootings across the United States last weekend that highlight the ongoing crime wave in the country.

“There are so many factors that have converged during the pandemic, including the protests of 2020 and what resulted from that,” Moore said. “How these have combined to exacerbate Seattle’s pre-existing challenges has been endlessly debated locally — and has, we know, been addressed by voters.”

There’s also a lot of debate in Seattle surrounding the affordability and homelessness crisis and how much of the city’s tech boom is to blame for making the situation worse.

Moore’s images of tents, trash and people in crisis – against the backdrop of a growing city – illustrate what many in Seattle see and react to daily in the downtown area, the I-5 corridor and in many neighborhoods.

“The wealth gap between rich and poor is not unique to Seattle,” Moore said. “Yes, it is true that technological wealth is in a category of its own, visually contrasting with tents on the street, but there are versions of this all over America – and even worse in the developing world.”

Moore thinks Seattle residents have a general penchant for kindness, which perhaps makes them generally more aware of the disparities that exist within the city. But he said it is heartbreaking to see so many people mired not only in homelessness, but also in serious opioid addiction, from which it is extremely difficult to escape alive.

But within this community, he witnessed humanity and kindness.

“There are beautiful people within the homeless community who care for each other lovingly, even in difficult circumstances,” Moore said. “I took a picture [above] of a man watching over another after he passed out while smoking fentanyl in a camp.

“This moment touched me deeply and I feel lucky to have made this image.”