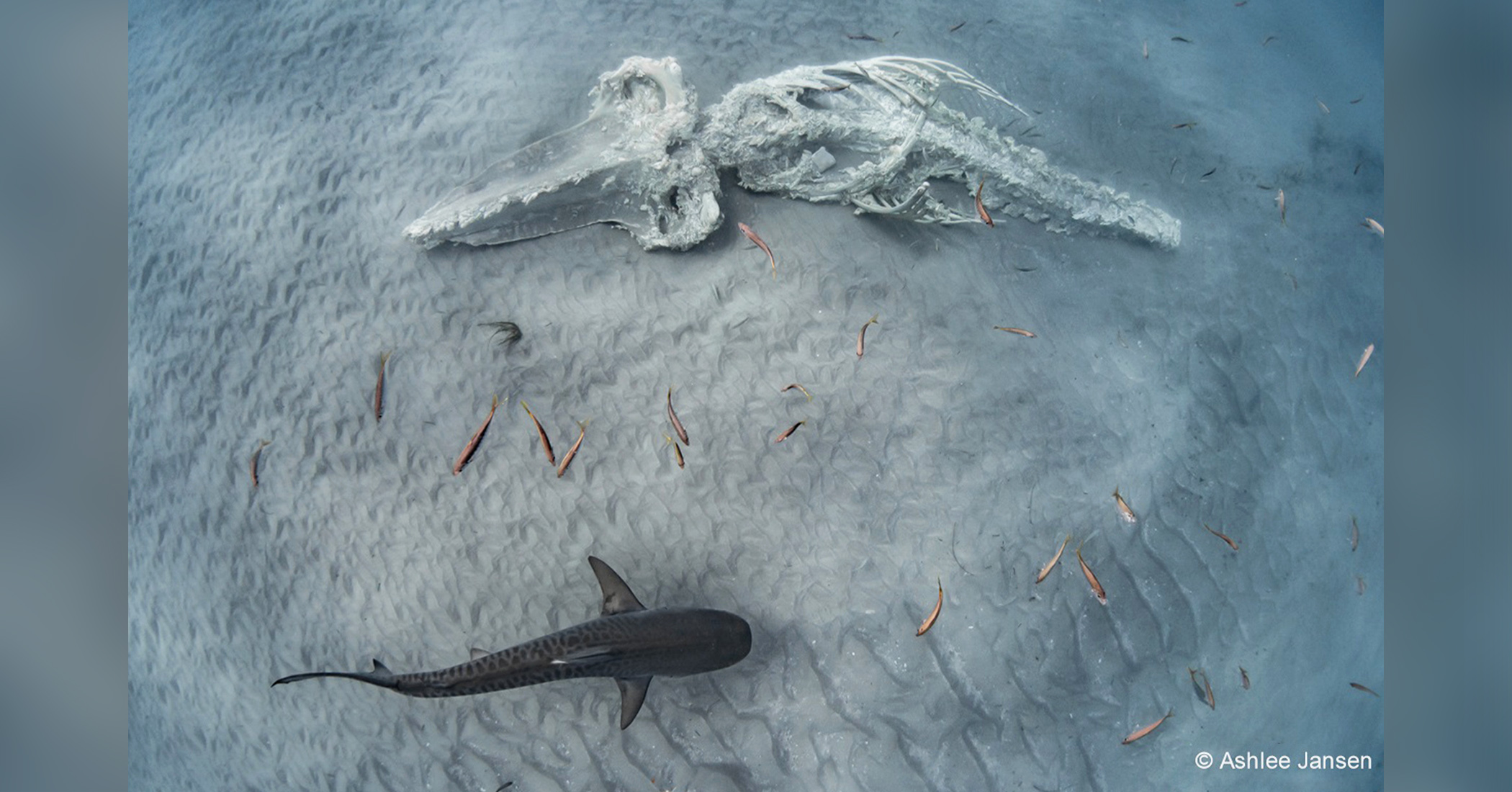 “Tour boats had watched the young whale for days as it moved slowly through the bay, appearing sicker and slower with more shark bites on its body day after day.”

The scene was visceral. While making its annual northward migration along Ningaloo Reef off Australia’s northwest coast, the mangled and sick fledgling adult humpback whale came closer to the natural terminus of its lifelong journey. life.

Ashlee Jansen, an aspiring marine photographer from Western Australia, was there. On this day in July 2021, she captured a profound visual allegory of life and death, one that would be widely recognized.

“Friends had spotted an oil slick on the surface caused by the fall of the whale,” Jansen said in a press release. “As they got closer they were struck by the distinct smell and knew they had found the location of the carcass lying on the ocean floor.

“Delighted to share their discovery, I rushed to their location and jumped into the water to find the skeleton of the young humpback whale. [lying] always at the bottom of the ocean. Surrounding the bare bones were several different species of well-fed sharks.

She added: “We spent a few hours floating above the whale carcass, watching the sharks come closer and closer, unfazed by our presence as they searched the area for any remaining food. “

His thrilling photo, a true testament to the circle of life, earned Jansen the distinction of becoming Australia’s Geographical Nature Photographer of the Year 2022.

Still new to the art of underwater photography, having embarked on the pursuit in 2017, Jansen shared how proud she felt to be crowned the top prize.

“This competition is such a prestigious award and being named the overall winner is something I had never even considered, especially so early in my career as a photographer,” she said.

“I have always watched this competition and this prize with so much attention, so to be selected as the winner from among so many talented photographers, some of whom I have admired and inspired me throughout my career, is absolutely amazing.”

The judges were unanimous in choosing Jansen’s image from the 2,443 entries submitted – the most ever received by the competition.

The considerable aesthetic appeal of Jansen’s mesmerizing portrait involves its “artful circular composition”, the judges said. The curve of the whale’s skeletal ribs mirrors the patterns of sand and waves, keeping viewers’ eyes in the frame moving between the living and the dead.

Along with the title, Jansen received a cash prize of $10,000 and a trip prize from Coral Expeditions. The competition was a joint venture between Australian Geographic and the South Australian Museum in Adelaide.

“This year’s winning image by Ashlee Jansen is a powerful statement about the circle of life and the interconnectedness of species,” said Australian Geographic editor, Ms Chrissie Goldrick.

Not to be too overshadowed, a host of other impressive nature photographs included the rest of the contest winners in several categories. These categories included Animals in the Wild, Urban Animals, Botanical Landscape, New Astrophotography Category, and others.

Featured are a dramatically lit seahorse in the depths of the terrain, as well as the gaping jaws of a great white facing the camera lens, an acrobatic cave bat dining on fireflies in flight, aerial scenes of lush jungle with mist and white water to take your breath away, and much more.

“Each year, I am amazed by the quality of entries we receive for this competition, with entrants capturing incredible moments in time that inspire us to deepen our relationship with the natural world, while challenging us to reflect on our impact” , said Brian Oldman. , director of the South Australian Museum.

Our winner added: “This unforgettable experience reminds us of how harsh nature and the food chain can be, yet such an important part of the natural ecosystem. The sacrifice of one animal can provide so many nutrients to so many other wildlife species for years to come.

Share your stories with us at [email protected], and keep getting your daily dose of inspiration by signing up for the Inspired newsletter at TheEpochTimes.com/newsletter

How to get a good interest rate for a personal loan