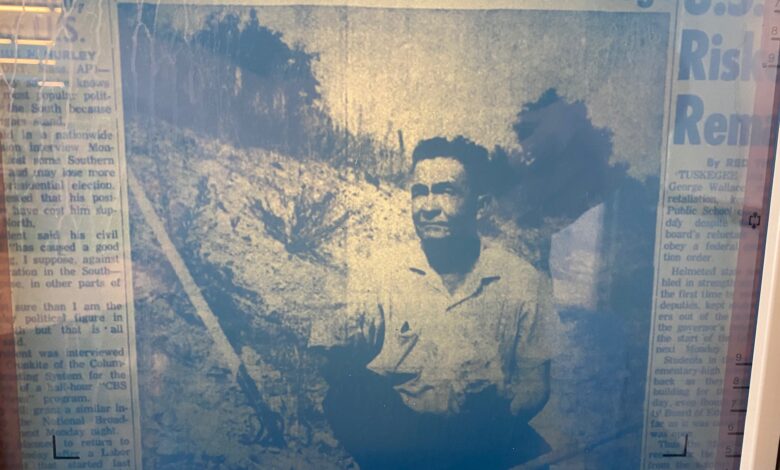 Funny the things you stumble over when you’re not looking for them. For this writer, it was while researching my article on Perry Campbell from a few weeks ago. I was at the Hempstead County Library browsing through old issues of Hope Star, looking for information about the founding of Perrytown when I came across a splashed photo on the front page a few days before. â€œPrehistoric bones found at Saratoga,â€ the headline read, sitting on a photo of a man perched next to a shovel, a set of three or four objects the size of coffee cans stacked in front of him.

Looking closely, I could tell that they looked like vertebrae, but in a much larger size. Momentarily forgetting what I was looking for originally (because, let’s face it, you don’t really overcoming the teenage excitement of all that involves these gigantic prehistoric reptiles), I studied the photograph as I pictured towering, long-necked behemoths tumbling down Main Street. Reading the cut line below the photo, my curiosity was piqued even more. “John Gray, Hope, Arkansas Highway Department employee, is shown with bones, possibly of a prehistoric creature, which he found last week near Saratoga.”

Now I am not from the area. Of course, there isn’t much distance between the southeast and southwest parts of Arkansas, but I’m still learning the basic geography of the area. I knew I had seen a sign for Saratoga, but had no idea how far it was, or what the area looked like. Then another part of the cut line caught my eye. “Similar bones were found by Weldon Fulton in the Blevins area a few years ago.”

Say now. Several discoveries in the region? We’re on to something here. Taking notes on the date (September 3, 1963, that was the date of the photo in the Hope Star, so I guess Gray found Saratoga’s bones in late August), I determined that Fulton’s must have been in 1961, although combing through an entire year of newspapers is a daunting task with no specific date to begin with.

So, putting on my imaginary fedora, I set out in the footsteps of Jurassic Ark.

My discoveries were quite rare at the beginning. In addition to the discovery of Fulton and Gray’s vertebrae, I came across the Arkansas Educational Resource Initiative for Evolution and Arkansas Paleontology, or PALEOAERIE. They had a 2014 article titled “Fossil Friday, Going Swimmingly” in which the author challenged the reader to identify a vertebra pictured next to a soccer ball to show the scale. The vertebrae matched that in the Gray photograph (only colorized), and I was delighted to find out when reading the article that it had been found in the Saratoga area by Matt Smith from Howard County. The vertebrae had been identified as belonging to an Elasmosaurus, a type of plesiosaur.

The article also pointed out that many of the bones found in the southwestern region of Arkansas actually belong to Mosasaurs, marine reptiles that thrived in deep tropical waters. It appears that, manner by the end of the Cretaceous, most of southwestern Arkansas was underwater. And, the climate being a parcel more tropical, the area was perfect for these types of large aquatic predators. It raised an eyebrow, I can tell you that. I already knew that fossils had been found here and there in Arkansas, and even that we have an official state dinosaur (more on this momentarily), but imagine these finned, long-necked beings sailing the waters near Millwood was really quite something.

So what is a fearless journalist with an imaginary felt to do and a loose mastery of regional geography to do? I got in my car and drove to Saratoga, hoping to tell someone about the plethora of prehistoric predators whose remains were surely on the landing. Maybe I’ll even find a few myself! Imagine my disappointment when all I found was a picturesque dock and a beautiful crystal clear lake with no Loch Nessian pass to see.

My hopes are far from being dashed, however, I have delved into the fossil finds in the area. Near Lockesburg in 1972, a man named JB Friday found a set of bones on his property. These were studied by Professor James Harrison Quinn and determined to be the first “scientific” identification of dinosaur bones in the state. The bipedal ostrich-like creature was named “Arkansaurus fridayi” by Quinn and has become the state’s official dinosaur.

Closer to Hope, however, was something called “The Briar Site” in a rather vague Wikipedia entry on fossils found in the state. Apparently a gypsum mine (which I knew to be a mineral, but had to do some research to find out its use and where it would be mined in Arkansas) in Southwest Arkansas in 1983 thought it had a hell of a problem. pothole. Those big, fairly evenly spaced divots were everywhere, and they couldn’t figure out why. Enter Jeff Pittman, who came to study the sediment and identified potholes for what they really were: traces of sauropods.

While many people have seen jurassic park or played with toy dinosaurs (ironically playing with the remains of real dinosaurs by proxy), or read books about giant lizards, there is a generation of people my age who grew up with the animated film The land before time. The film tells the story of Little Foot, a “Longneck” (sauropod) who loses his mother to a T-Rex attack and must join a brave group of young dinosaurs as they make their way to the Great Valley, where they ‘They will be safe from predators and will have all the tree stars (similar to maple leaves) that they can eat. It was one of my favorite childhood movies and, if memory serves, the first I got to see in a real theater.

I had to find out where the Briar site was located. It was important.

Gypsum mines in Arkansas, as you can imagine, are rather rare. Imagine my joy when I found out there was one a stone’s throw away near Nashville. Certainteed Gypsum, my search engine told me, had been running for several years under different names. Taking a chance, I called them up and asked the young woman on the other end of the line what was perhaps the strangest question she had had all day. “Are you all the place that found the dinosaur footprints?” I asked, suppressing my growing excitement. â€œWe are,â€ she replied.

I was on the moon.

She put me in touch with the mine manager, Matt Porter, who told me that just ten years ago they found more footprints. Professor Steven Boss of the University of Arkansas was able to identify them, confirming them as traces of sauropods. “Guess you don’t have any there that I could, let’s say come and take a look?” Maybe take pictures of? I asked. Porter informed me that although they did not have any at the mine currently, they had donated it to Nashville City Park.

I was in my car and on the road before I even picked up the phone. Nashville, just 35 minutes away, is a pretty little town. Their city park, too, is charming. Concrete tree-lined paths, tennis courts, amphitheater. However, I didn’t have time for such frivolities. There was a sauropod footprint to be found! Fortunately, the Nashville Parks and Recreation Department had an office right next to the park entrance. If anyone knew where the footprint would be in the park, it was them.

Sure enough, the helpful people in the office were delighted to point me in the direction of my career, indicating that the museum also had a dinosaur exhibit. As I parked in the park parking lot, I got out of my car and took a path bathed in sunshine to a small pond. There, right in front of the water, sat a huge piece of concrete with an impression of an equally huge foot.

I had to strangle my inner six-year-old long enough to remove the needles and pine leaves that had settled in the depression in the stone. As I stood there staring at the divots in the poured concrete, I thought, “I have to show people back to the office.” I took a few photos, but they didn’t really do justice to the size of the indentations. I took off my left sneaker and placed it next to the dino-divot, sending the photo back to the office.

Coming back to my car, I had a welcome surprise. A sign, literally, from above. A single maple leaf had landed on my car, just above the driver’s door. Obviously my path was preordered. It was fate.

In an investigation of a museum in Nashville, I headed across town to what turned out to be a quaint old chapel that housed a museum. The curator showed me inside, where a collection of antiques and memorabilia from several wars stood behind glass. I mentioned that I had hoped to see their sauropod footprint, like the one in the park. â€œWe don’t have a footprint,â€ she said. My heart sank. “But we have them.” She lifted a black cloth from a display case, revealing an exhibit of hadrosaur foot bones found in the area, along with several other shell bones and fossils. My heart leaps.

I came back from my adventures with a lot of teenage excitement filling my head with imaginary giants pushing out of the woods beside the highway. By chance, I had come across an exciting piece of Arkansas prehistory while searching for an unrelated article. Who knows what I’ll stumble upon next?