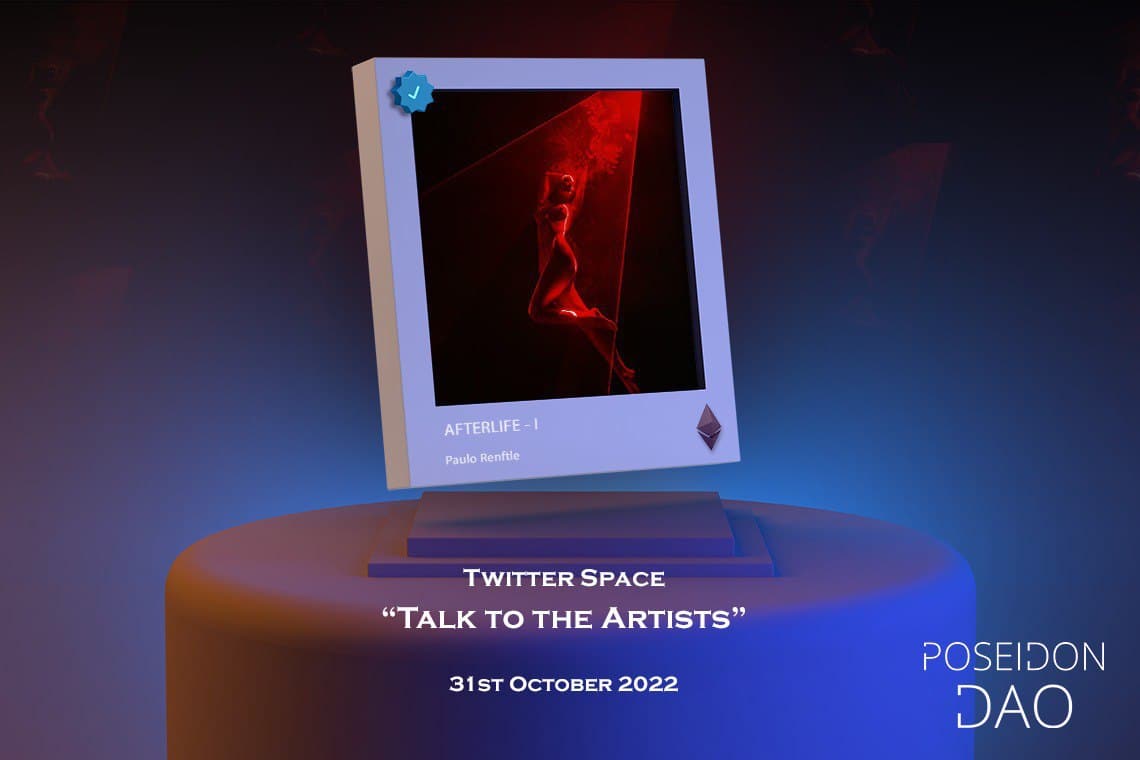 October 31, Poseidon DAO held a Twitter space with photographer Paulo Renftle, ​​who recently landed on SuperRare with the first works in Life after death series.

Unlike previous meetings, the focus was not only on the artist, but also gave space to explain the work of Poseidon DAO. draft white paper and comment on the open edition that took place on Manifold in the previous hours, which sold out in less than half an hour.

In particular, Poseidon explained how the open edition he launched, and those that will follow, are not just about showcasing talented up-and-coming artists, but also about distributing the tokens that the DAO will issue to the community. Purchasing any of the Poseidon Deploy Collection Open Editions on the primary or secondary market will allow people to receive a free Poseidon DAO token airdrop.

Paolo Renftle, ​​started his photography career at a very young age, then worked with several luxury brands including Armani and Valentino in fashion, Lamborghini for supercars, and many other high-end watch and jewelry brands.

After a brief stint as a painter when he was young, Renftle became interested in photography in his early twenties, working in different parts of the world, from Bali to Singapore to Bangkok, eventually returning to Italy, where he established himself in haute couture and luxury photography in general.

Renftle, ​​during the AMA, clarified the difference between his commercial work and his personal work. There is a distinction mainly in the process. When shooting for brands, he always tries to communicate his idea and vision, but very often he is limited by the demands of the clients.

These limits can also be a source of impatience because, at a certain point in your career, when the ideas are clear and the direction is too, you want to build something unique. On the other hand, when shooting for himself, Renftle is able to fully express his ideas, to capture the beauty of his subjects, because, as he himself says, “there is always a need for beauty in life, where beauty means not only what creates the wow effect but more importantly what makes you feel like a kid again.Her personal projects also include creating a short video, Believe in mehit on Foundation in collaboration with Poseidon DAO.

The Life after death The project began with the intention of creating a series of personal works for a book about his 20-year professional career. The photo shoot for the book, which was carried out entirely in Sicily, involved a huge amount of work both on and off the water and focused mainly on finding the best position to get the perfect picture in terms of contrast between the movement of water and the rays of the sun.

The biggest challenge then was to recreate the same conditions of contrast between light and water in the studio, and to do this the photographer used laser effects and a smoke machine. By playing with angles and movements, he was able to achieve photos that capture an almost classic sensuality, without ever blending into vulgar imagery. The first work in the seriespurchased by Poseidon, will be followed by other works that will soon hit SuperRare.