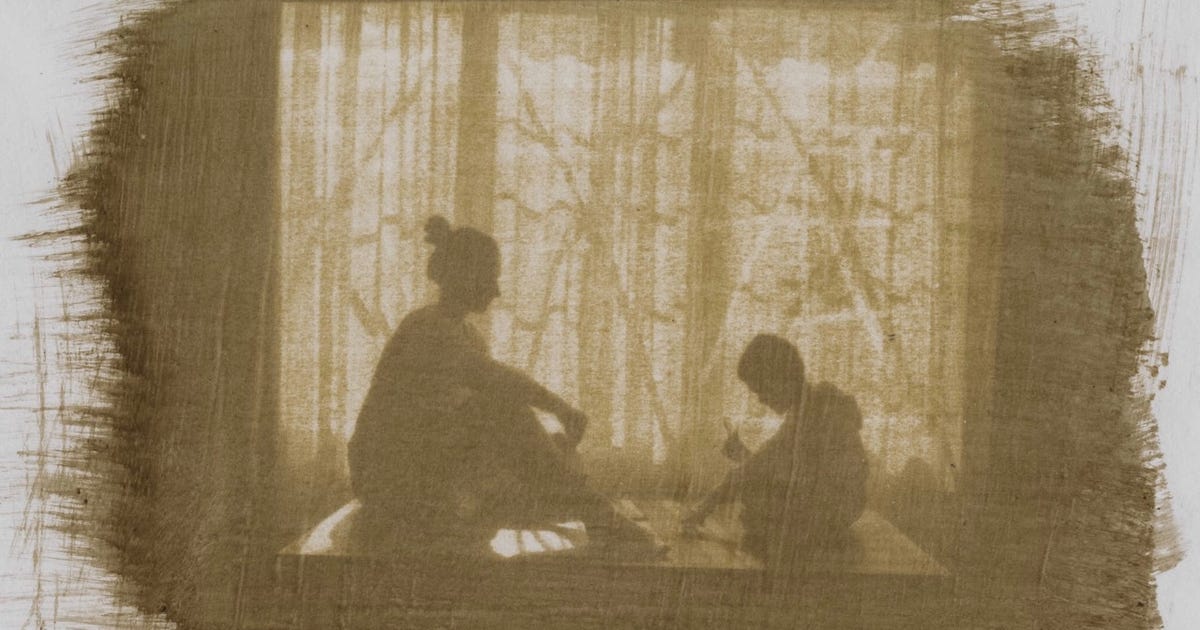 Living in wartime Kyiv, Ukraine, Valerii Veduta has grown accustomed to the daily sounds of airstrike alerts and the sight of tanks and rocket launchers. However, the artist has what he calls his own “weapon of choice”: photography.

Since Russia invaded Ukraine in February, he has been documenting his family’s life through a photographic diary made with a large format film camera and tripod. He processes the photos in his bathroom using Ukrainian earth as a pigment to give them a dreamlike, almost nostalgic look. Then he scans them.

Multimedia images from his family album War Times — now sold as NFT on the Voice digital art market — does not directly document the invasion and its horrors. Veduta, 39, sees them more as a poem about the impact of war on ordinary people at the intersection of military conflict and everyday life.

The images have a poetic quality, thanks to gum bichromate, a 19th-century photographic printing process that can produce painterly images from photographic negatives.

In one, titled Calm Not Calm Day, Veduta’s wife and 5-year-old son sit playing cards in front of a window. At first glance, it’s a quiet domestic scene. But look closer and you’ll notice criss-cross lines on the windows. It’s tape the family affixed to the window to prevent glass from flying around the room in the event of shock waves from an explosion.

Another image, titled Library and Military Vehicle, captures just that: a wrecked Russian military vehicle in front of a public library, the ordinary juxtaposed with the anything but ordinary in an eerily serene pastiche.

Veduta’s work has appeared in Vogue Italia, Vogue Greece, Vogue Portugal and Harpers Bazaar and on PhotoVogue, Conde Nast’s international database of contemporary photography. The war disrupted her business and her son’s kindergarten. A missile destroyed a downtown playground where her child used to play.

“Everything is different, but somehow now I’m forcing myself to do something of ‘normal life’ to feel alive and normal,” the artist says of his photography series, which sells on Voice for $300 per NFT (around £268). , AU$480).

The gum bichromate printing process consists of coating the paper with an emulsion based on powdered chemicals; a dry gummy substance called gum arabic; and a water-soluble pigment – in Veduta’s case, the soil of his war-torn country’s soil. When exposed to UV light, the gummy substance hardens and the remnants of dichromate and gum arabic are washed away. Before it hardens, however, a photographer can brush or reshape the physical texture of the print to add a new element of expressiveness.

“I find it poetic that I have to use poison (that’s what dichromate is) and earth to create my images, and the poison has to be washed away,” says Veduta.

Veduta’s images are among those sold on Voice following a virtual month”NFT ResidenceThrough stipends and workshops, the Arts Platform for Emerging Artists has guided PhotoVogue artists from 29 countries as they navigate the world of Web3, which can be defined in two ways, as explained by my CNET colleague, Daniel Van Boom.

“The quick and easy description is a blockchain-integrated internet or an internet where cryptocurrencies and NFTs are integrated with the platforms you use,” Van Boom writes. “The most complicated yet specific way to think of Web3 is a user-owned Internet. It’s the dream of crypto boosters, who say the integration of block chain technology will lead to an egalitarian Internet.”

The NFT residency focused on the overarching theme of fairness and justice, with artworks addressing topics such as the long-term effects of the COVID pandemic on children, the consequences of a recent major oil spill and, in Veduta’s case, the challenges of living in a war zone. New works from the residency will be released in October and November.

The dirt that tints Veduta’s artwork comes mostly from the same place, but sometimes, as in the case of the bombarded playground, the dirt connects directly to the image it colors.

“My child grew up on this playground. It was our place”, says the artist. “So I took a picture of a crater and scooped some dirt from there.”

Looking to the future, Veduta hopes that the day he can use a different pigment to tint his images – clay from Sivash, a saltwater lake on the Sea of ​​Azov that separates Crimea from Ukraine. Veduta’s parents have a house on the shores of the lake, the black clay of which is famous for its healing properties.

“One day,” he says, “I will photograph my homeland and print pictures with this healing clay.”

8 alarming signs that you could be sabotaging your finances