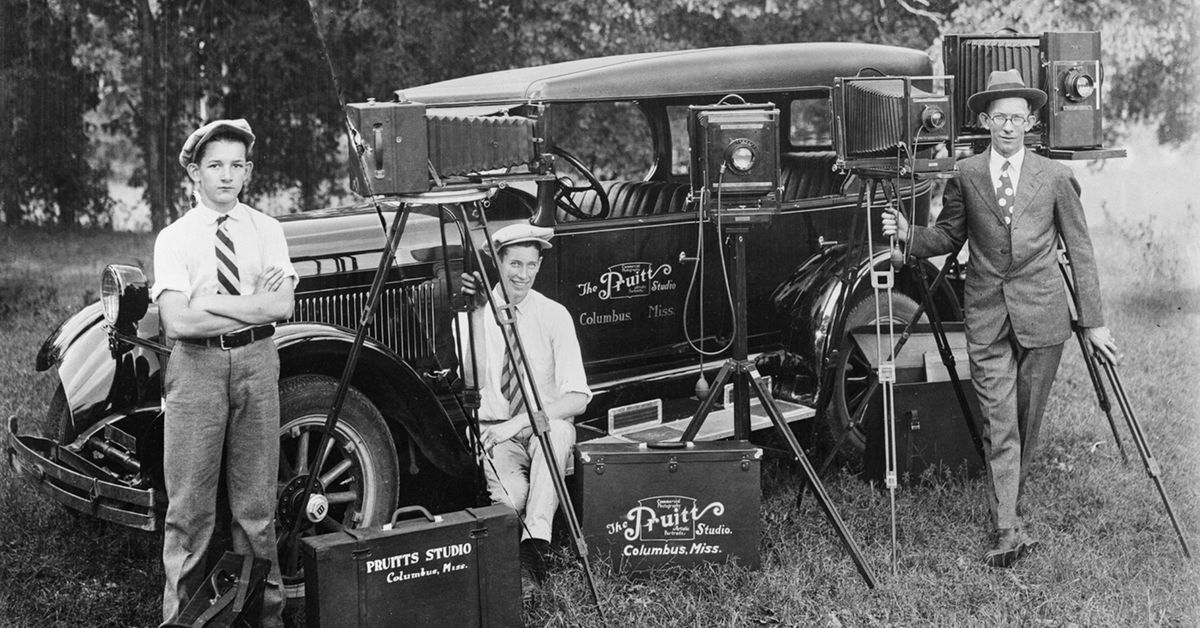 Photographer ON Pruitt captured the stories of Columbus, Mississippi

On a Tombigbee riverbank in Columbus, Mississippi, photographer ON Pruitt sets up his large format camera on a tripod. Before him, whites and blacks – children and adults, dressed in Sunday clothes – gather for baptism. Some raise their voices while singing. Two preachers, open Bibles in hand, prepare the candidates — albeit separately and unequally — for the sacred ritual.

As two men pull a young girl dressed in all-white clothes out of the water and the words “In the name of the Father, and of the Son, and of the Holy Ghost” would have stopped in the air, Pruitt triggers the shutter and the moment photography is forever.

Half a century after those baptisms – and around the time I was entering the first stages of a professional career as a writer, editor and later teacher – several childhood friends and I discovered a treasure of images of Pruitt. Covered in dust, the mummified images resided in wooden crates and cardboard boxes, smelling to the sky as they deteriorated.

These included the photos Pruitt took of me and my family at Thanksgiving and Christmas at my grandmother’s Victorian home in 1954. He photographed my grandparents’ sanitary laundry and dry cleaners ( their slogan was “When the clothes are dirty, dial 630”) and my dad’s main street gas station (slogan: “Fear not. Call Russ.”).

But in those boxes, there was so much more. It was the photobiography of our hometown.

Throughout history, people have documented their lives and those of their families in letters, journals, and scrapbooks — even digitally mapping their family trees through tech companies like Ancestry.com. But after finding these cardboard boxes full of negatives, the value of going beyond the roots of our family tree to uncover the stories of my community became unmistakable.

Eventually, in 1987, these four friends and I acquired the collection to save it from the dustbins of history. Long before Google or Ancestry.com, we unearthed stories buried among family tree roots and forgotten memories. In some photos, we discover the graces of everyday life. In others, the secular horrors of racial apartheid. We had never heard of the specific stories represented by certain images. Nor the long-hidden beauty and resilience of the people who make them up.

Few photos had captions, the same way you might find confusing photos in a family album and not know who is being photographed or why. But fueled by curiosity, I learned that if you show photos to your relatives, friends, neighbors or local librarians, you can make amazing discoveries.

It took me 10 years before Google to figure out the name and story of the young black man depicted sitting on a wooden barrel and holding a broom in one of Pruitt’s studio portraits.

While I can’t detail everything, I can say that a story unfolded after I found a petite white woman over 90, Hawley Knox Brown, who recognized Oscar West. He had taken care of his children and worked as a janitor for her husband’s Brown Buick-Cadillac Co.. She led me to West’s son, Oscar Lang. Lang told me how West helped a 5-year-old boy named Floyd Brown Jr.

According to the story, West took two wooden milk crates and shaped them into an airplane with a propeller. Then, spinning it, West said to the boy, “Okay, now you fly.” After Brown retired as administrator of the Citadel in Charleston, South Carolina, he told Lang, “The reason I’m sitting here now as a retired military colonel, as a pilot, is (because of) your dad.”

In another photograph, Pruitt depicted the 1934 execution of James Keaton, a black man on a gallows surrounded by white law enforcement officials outside the Lowndes County Courthouse. For years, as a young boy in the 1960s, I delivered the diary to Mrs. Hayslett, a widow. I never found out what happened to her late husband, and I knew it wasn’t polite to ask. But as a child, I always wondered. Now, with this photo, I had pieced together that it was James Keaton who had been convicted of her husband’s murder. But when I asked another woman about the murder, she claimed Keaton didn’t commit the crime, but she knew who did. It only added to the mystery of several generations that she would not divulge the name.

While some photographs reveal the secrets of my closed-lipped home, others reveal national secrets.

With his large-format camera in November 1930, Pruitt captured a convergence of personalities: former world heavyweight champion Dempsey (once a teenage boxing Latter-day Saint in Provo and Salt Lake City), the parents of author Truman Capote and a “buried alive”. ” carnival number known as Le Grand Pacha with his companion Madame Flozella.

Dempsey and Capote’s mother – Lillie Mae Faulk Persons – was having an affair at the time of the photograph. Capote’s father, Arch Persons, ran The Great Pacha. And, probably with Lillie Mae’s help, Arch had secured Dempsey’s participation in a campaign to promote “Dollar Days” and “Dempsey Day” in Columbus, with Dempsey as the boxing match referee. Fifteen years later, Capote would write one of his first big short stories, “A Tree of Night”. It featured a “buried alive” carnival couple, boarding a train opposite a curious female student.

Another image, a nitrate negative, shows a middle-aged black man in worn overalls and smiling as his bare-back mule stands beside him. After 10 years of talking to people all over town and in juke joints and combing through newspapers and magazines, I discovered his name: Sylvester Harris. And boy, does he have a story.

A farmer, Harris was inspired by hearing the fireside chats of Franklin D. Roosevelt — pep talks the president broadcast on the radio to give reassurance to Americans weary from the ravages of the Great Depression. So in February 1934, when Harris couldn’t make his mortgage payments, he drove his van to Columbus to call the president. He used a phone at the Western Supply store, and after 90 minutes reached Roosevelt himself. Quickly, the president agreed to help Harris save the farm from foreclosure. In today’s parlance, Harris has gone viral — in part because Pruitt took a photo that was distributed nationally. News has come to Harris’ farm to save this brave black farmer who became a hero of the Great Depression.

But in the past three decades that I’ve spent discovering the stories of the 88,000 negatives Pruitt left behind of his dirt postage stamp, none have touched me more than learning the real story behind that first photo. of baptism that I dusted off. In the 1950s and 1960s, I grew up in a red brick house four blocks from the Tombigbee River. I’ve swum and skied there with its cottonmouths, alligator gar, and catfish, but I’d never seen or heard of the black-and-white baptisms that Pruitt documented. There are many photographs of Southern baptisms, and while they may exist, I have yet to find any others showing black and white religious groups together like this.

When my mother approached the age of 90, at the turn of the millennium, I showed her the pictures of the baptism. A non-stop storyteller, she never told me this story.

My mother had grown up three blocks from the river. She said she, her sister and brothers, raised Baptists in a racially segregated church, often traveled to the river in the 1920s to attend black and white baptisms. University of Mississippi religion researcher Charles Reagan Wilson calls the biracial assembly documented by Pruitt “remarkable.” I wish my mother had told me sooner because the images resonate with me, enriching my understanding of the puzzling region where my family has lived for generations. The images give new meaning to the song we sang at First Baptist Church when we declared that everyone is precious in the sight of Jesus.

And while I have discovered stories that trouble me deeply, I have also found stories like these that provide substantial measures of comfort and inspiration. Ultimately, I believe my persistent journey of discovery can serve as a compass, if you will, for navigating our cultural crossroads today.

I learned from these photos left by the Columbus picture man – and I believe anyone could. Harvard photography expert Barbara Norfleet reminds us in “The Champion Pig” that photographs are great for raising questions and “can reveal what you don’t understand, and also what you take for granted.” In 1941, an advertisement for the Pruitt studio in the local Commercial Dispatch read: “Photographs Live Forever”. This notion of heritage prompts me to ask the following question: what questions do our family and community photographs raise? How might we discover answers? What could we all learn from these images that connect our past to our present and our future?

Berkley Hudson is Emeritus Associate Professor of Media History at the Missouri School of Journalism in Colombia. His new bookON Pruitt’s Possum Town: Photographing Unrest and Resilience in the American Southwas published by University of North Carolina Press with the Center for Documentary Studies at Duke University.

This story appears in the February issue of Desert Magazine. Learn more about how to subscribe.