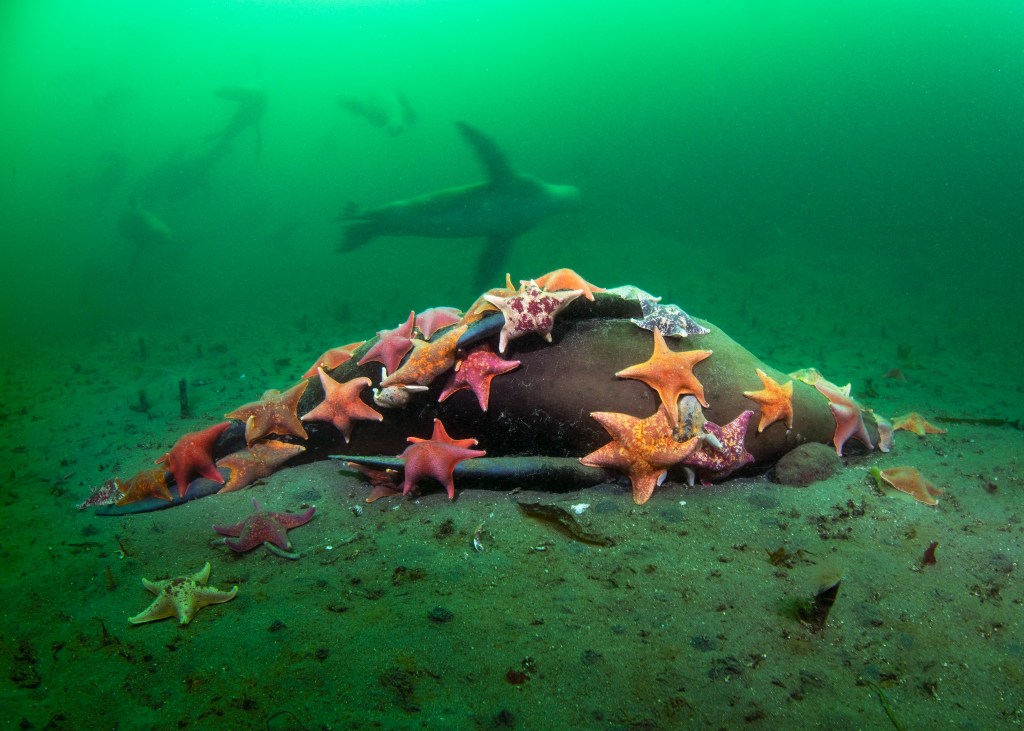 MONTEREY — David Slater grew up observing ocean life through the lens of a disposable camera, the kind with blue shells and the fuzzy ability to develop insight into scenes hidden beneath the swell.

“I was literally blown away,” Slater said, sitting down for an interview on a night off at Monterey Peninsula Community Hospital. “It just confirms that maybe I have this underwater photography thing, after all these years of trying to be disciplined and become a better photographer. … I don’t know. It’s just surreal.

Photographed during a dip off San Carlos Beach in Monterey, “Sea Lion Fall” is the delicate capture of a starfish devouring a dead sea lion, lying on the ocean floor. A living mosaic of decay, Slater’s submission was the culmination of a series of dives to the animal, he explained, taken over two weeks in September.

Although Slater often made regular visits to San Carlos – his favorite spot for leisurely dives between hospital shifts – an unusual sighting of something motionless in the sand 40 feet below piqued his curiosity. and launched an investigation. Moving closer, Slater clearly saw his subject for the first time, dead with all but his tail tied to the ground. On this first visit, only two starfish claimed the corpse, carefully covering their eyes as a sign of silent respect.

“I had never seen a dead sea lion like that on the ground, and just the way it was positioned…it reminded me of Greek mythology,” Slater explained, referring to the Greek legend where coins would be placed on the eyes of the dead as payment. ensure the passage to the beyond. “As a photographer, it was inspiring. And it awoke the marine scientist in me – and my inner child.

Slater, 32, graduated in marine science from the University of Hawaii at Mānoa in 2012, moving to Oahu after growing up by the sea in South Florida. Slater stayed around the island for five more years, working seasonal marine science jobs as he sought a long-term position. During this time, Slater parallel learned the intricacies of underwater photography, frequently spending hours in cafes sifting through videos on flash photography or the fundamentals of exposure.

Certified in scuba diving in 2010, Slater’s passions have grown to complement each other, with his trained eye for science and his daily travels in the water providing ample time and understanding to practice his craft. Eventually, photography “kind of turned into a lifestyle,” he said.

But five years ago, Slater hit a roadblock. Stifled by slim chances for permanent marine science roles in Hawaii, he moved to Monterey in hopes of more opportunities. The options, however, remained few. So Slater took a career turn and headed into health care. For three years, he worked as an emergency medical technician in an American Medical Response (AMR) ambulance, followed by his final move to the community hospital emergency room.

When not scheduled, Slater still maintains close ties to the ocean, but now it’s a break rather than for his job.

“(I discovered) this beautiful balance. I wanted the ocean to be part of my life, but at the end of the day, I’m in a peaceful place where I have to work, and I don’t want to ruin my passion for the ocean doing a job I don’t want “, he said. “So I fell in love with health care and emergency medicine and helping people.”

And on the stressful workdays that were inherent to Slater’s career even before the pandemic, the after-hours photographer looks forward to the time when he can escape underwater.

It’s a method of coping Slater used last fall when he found himself “in a very dark time.” Working overtime and uncharacteristically uninspired, Slater resorted to diving. His instincts paid off, the technician’s respite dive led him to a sea lion sprawled in the sand.

“I could almost feel myself coming out of this depression,” he said. “It really reminded me of how much this passion and lifestyle completes me.”

Inspired but dissatisfied with his first encounter, Slater worked a night shift and returned to the Fallen Sea Lion the next day, continuing to dive the scene “as much as physically possible” while working full time.

With each successive voyage, more and more starfish swarmed the placid creature, adding flecks of warm hues to its gray body. Two weeks into Discovery, equipped with his usual water-capable Nikon and two strobes to enliven the aquatic setting, Slater took on “Sea Lion Fall.”

“I knew it was amazing, even underwater,” he said.

That was the last time Slater saw the sea lion. Although satisfied with his work the day before, Slater returned the next morning, only to see a group of starfish mysteriously left in the animal’s wake. When asked if he was disappointed by the disappearance, Slater replied with a contradictory “yes and no”.

“I would have loved diving with her until she was this beautiful skeleton… (but) at that point I was just happy to be a part of it,” he said, adding that his connection to the scene was deeper than catching a fleeting moment. . “…It touched me personally because, working in the emergency field, almost every time I come in, I face death or dying and sickness. For me, death is very present in my life, and it kind of reminds me of my own mortality.

For Slater, the stark — and invigorating — wake-up call was reward enough. A nod from the California Academy of Sciences months later, for which he only stepped out after encouragement from family, friends and fellow photographers, was an unexpected claim.

Since the announcement of the price on its PageInstagramwhere the story behind “Sea Lion Fall” was documented in real time, Slater admitted “people joke that I’m an ‘award winning photographer now’.” He just smiled, sweeping the title.

“It’s really a big validation, but I feel the same way,” he said.

Pausing to think about what’s next, Slater explained that his future is “uncharted territory” as he harbors unfinished plans for his healthcare career. This fall, Slater is expected to study nursing at Monterey Peninsula College. He was accepted to school four days after taking first place at BigPicture.

So far, Slater hasn’t wavered in her commitment to getting her associate’s degree in nursing. But looking beyond the next two years, Slater is still weighing his choices.

“Sea Lion Fall” will be featured in a 2022 BigPicture Winners and Finalists Exhibit beginning September 30 at the California Academy of Sciences in San Francisco. A full view of the winners can be found at https://www.bigpicturecompetition.org/2022-winners.