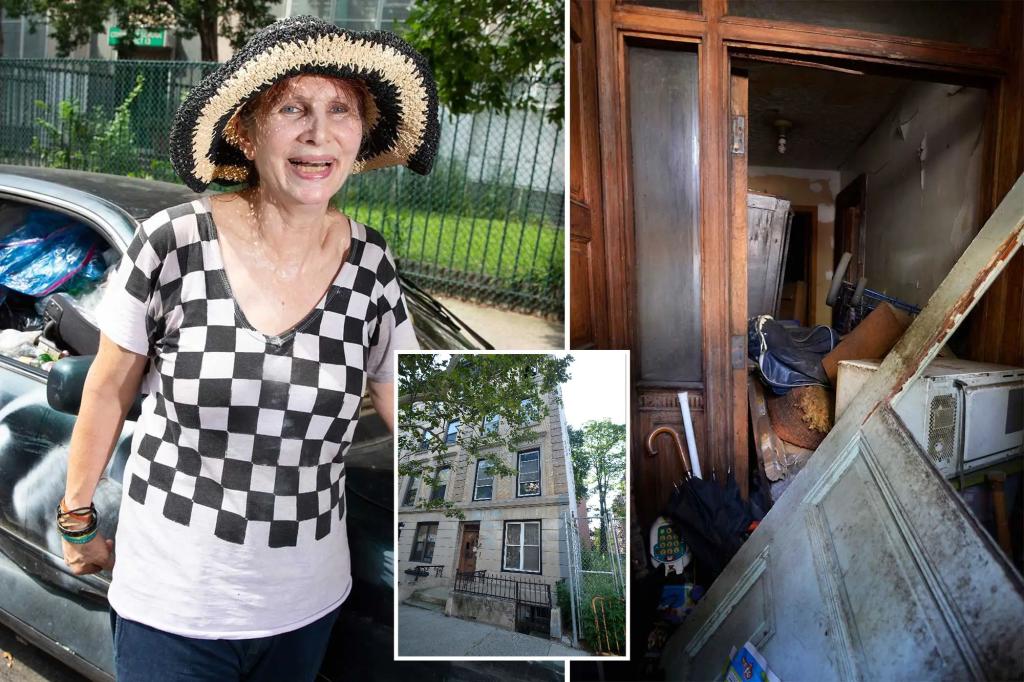 An eccentric millionaire landlady – known for collecting cans and bottles in her Brooklyn neighborhood – is currently negotiating with the city to save one of the iconic Manhattan properties she owns.

Lisa Fiekowsky, 71, told the Post she’s in talks with the city to save the 125-year-old Renaissance Revival-style brick and limestone building she owns at 451 Convent Ave. The Post reported on Aug. 21 that the property was slated for demolition because Fiekowsky had allegedly neglected it for decades.

“I am actively working with the Department of Buildings to save the building,” she said. “There’s a lot going on with engineers and lawyers, and I’m doing everything I can to save him. I’m not sure my lawyer will let me say anything more.

The four-story building, which is padlocked and has a large hole in the roof, had fallen into such disrepair that the city considered it a danger to the public and the Buildings Department took the decision to demolish it on last month.

Nestled on an immaculate block in Harlem’s historic Sugar Hill neighborhood, the structure has racked up thousands of dollars in fines and violations as well as a lawsuit from the city over a nine-year span. Fiekowsky, who lives in a million-dollar co-op next to Prospect Park with her husband, bought the Harlem property in 1999 but failed to take care of it, according to public records.

Now she’s surrounded herself with a small team of structural engineers and other experts to try to save the property, and the DOB is giving her a week to put a contingency plan in place.

“If the Owner’s engineering firm provides the additional information requested and coordinates the proposed work with the PLC [Landmarks Preservation Commission]and the owner continues to stabilize the building in accordance with plans acceptable to the Department, we may extend emergency demolition while the owner mitigates risk and completes repairs,” a DOB spokesperson told the Post on Thursday.

Fiekowsky, who holds an MBA from the University of Chicago, owns two other properties near Harlem and has drawn the ire of local residents who told the Post they don’t understand why she doesn’t maintain them.

“It’s a blight on an otherwise beautiful neighborhood,” said William Geddes, commercial photographer and president of the Hamilton Terrace Block Association, named after the street where the properties are located.

Geddes told the Post he lives in the leafy block of Harlem that leads to the Hamilton Grange National Memorial where founding father Alexander Hamilton has lived for the past 15 years. He said that during this period he had never seen tenants or maintenance at 47 and 60 Hamilton Terrace, which are both owned by Fiekowsky, who also bears his married name, Silversmith.

Fiekowsky regularly paid taxes on the Convent Avenue property and 60 Hamilton Terrace, which she bought for $1.5 million in 2005, according to public records. But she owes more than $62,000 in property taxes at 47 Hamilton Terrace, records show.

“We tried to reach her to do something about the properties,” Geddes said, adding that neighbors have called police and the DOB over the past few years to report rat infestations and damage, but nothing has happened. helped, he said. “It attracts wandering, trash and rats. It’s not a good scene, but there’s not much we can do about it.

Another neighbor, who did not want to be identified, said Hamilton Terrace is a close-knit neighborhood where “we have each other’s keys and function as our own gatekeepers.”

“I’ve been here 20 years and I’ve never seen anyone come in or out of these houses,” the neighbor said, referring to 47 and 60 Hamilton Terrace. “It’s really a shame.”

When asked if she had seen the owner, the neighbor shrugged and said she had read stories in The Post about how she drove around town in a battered car picking up cans and drinks. bottles.

In 2018, The Post wrote about how Fiekowsky’s trash-filled Toyota Camry had been an eyesore in his Prospect Heights neighborhood for years.