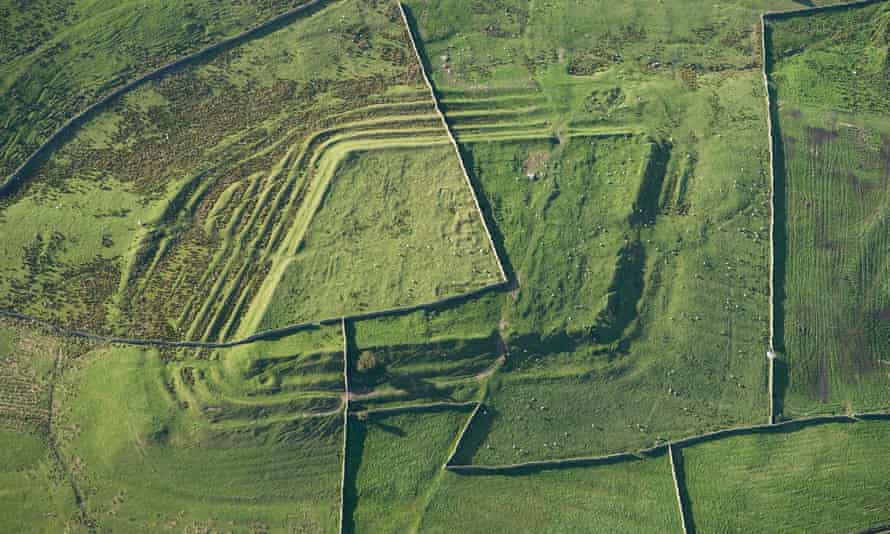 The map contains thousands of archaeological sites that have been identified in aerial photographs and from images derived from airborne laser scanning, also known as lidar data. Lidar uses laser light to create a 3D representation of the Earth’s surface and is a newer technology that can be applied to the work of an aerial archaeologist.

The earliest sites in England that have been mapped date back around 6,000 years and include long burial mounds, flint mines and causeway enclosures from the Early Neolithic, while the more recent sites belong to the second half of the 20th century – for example, those associated with the Cold War. There are also Bronze Age round burial mounds, Iron Age fortresses, Roman camps, settlements, trails, and terrain systems that represent several millennia of activity.

Mapping allows archaeological features to be viewed not only as individual sites, but as part of complex, multi-period landscapes. Visualizing the evidence in this way can help transform the understanding of these landscapes, especially when studied with other forms of evidence – the site-based data available from local historical environmental records or the Heritage Gateway and historical maps.

Each mapped site has a simple description with links to full historical environment records kept online and for most of the mapped areas there is also a free report detailing highlights and new discoveries encountered in each project.

Mapping work continues – not only are there areas Historic England has yet to analyze in detail, but new discoveries are still being made in places previously studied.

Hadrian’s Wall was part of a larger system of Roman infrastructure that included roads, forts, and temporary camps that form the Hadrian’s Wall World Heritage site. Some of these sites, such as Housesteads Fort, have been excavated and can be seen on the ground, but others remain hidden until seen from the sky. At White Moss, near Carlisle, are the remains of two temporary Roman camps first spotted from the air in 1949. During dry summers, the camp’s ditches can be seen as clipping marks as its growth is affected by buried archaeological remains.

When construction of the wall began in 122 AD, the landscape had already been inhabited and cultivated for generations. Aerial photography reveals traces of settlements along the wall. In the Solway Plain to the west, many have been discovered from the air with traces of field and trail boundaries that would once have connected them.

After the Roman military forces withdrew from Britain around 410 AD, Hadrian’s Wall continued to shape the landscape. From the aerial mapping it is possible to see how the medieval and post-medieval fields were laid out on either side of the wall. About 1,800 years after the construction of Hadrian’s Wall, this area was once again host to military forces, this time defending against an invasion. During World War II, sites ranging from airfields to military camps, artillery batteries and anti-invasion defenses were built.

One of the first areas of England to be extensively mapped with hand-drawn features on transparent film – finds from prehistoric earthworks and lead mining in the post-medieval period.

The Yorkshire Dales National Park is home to some of the country’s most spectacular archaeological landscapes. The pattern of fields and stone-walled barns is just one layer in a landscape whose history dates back thousands of years. It was one of the first regions of the country to be extensively mapped from aerial photographs. Before the use of digital, in the 2000s, lines were drawn by hand on transparent film, which required considerable know-how. These maps have since been digitized and turned into digital images. Even if the cartography dates back 30 years, it remains an astonishing testimony of the landscape.

Field after field, aerial photographs reveal bumps and bumps or features depicting the remains of settlements dating back to prehistoric times. Some of the most spectacular remains can be seen in Grassington, where the long shadows of the winter months highlight the earthworks of fields and paddocks.

In the post-medieval period, the Yorkshire Dales were exploited extensively for lead. Traces of wells and slag heaps litter the highlands. Just a few kilometers from Grassingon’s prehistoric field system is a large area of ​​lead mines which are protected as a listed monument.

Unusual find in the clay soil of a Roman / Iron-Age settlement near Combertom, southwest Cambridgeshire

Cut marks form more easily on free draining soils. This means that areas rich in clay are referred to as ‘heavy soils’, such as the soil in southwest Cambridgeshire. This type of soil has historically been less well studied and understood from the air and the assumption has been made that the area was less occupied in history.

However, under the right weather conditions, cutting marks can form and reveal new information about the history of these areas. One example is an astonishing Iron Age / Roman settlement near Comberton. Although a few of the enclosures have been previously captured in aerial photographs, the full extent of the enclosures and lighter features, including up to six round houses dating from the Iron Age and Roman period, n was not appreciated.

They demonstrate the value of a continuous aerial survey, especially on heavier soils – not only to identify new sites, but also when revisiting previously recorded sites where important new information may be revealed.

Discovery of the Iron Age and Roman fields seen as a model of “masonry”.

This project, carried out in 2005 and 2006, found that during the Iron Age and Roman times these parts of South and West Yorkshire (around Doncaster and Rotherham) were largely colonized and cultivated. Today’s landscape looks like featureless arable fields, but photographed from the sky during hot, dry summers, patterns are beginning to emerge. Known as cut marks, these patterns are formed when the color and height of a culture is affected by buried archaeological evidence.

Archaeologists have been photographing cropmarks in Yorkshire from the air for over 50 years and thousands of sites have been recorded. Once analyzed together, vast lost landscapes begin to emerge. Some of the most distinctive features are the Iron Age ditches and Roman field systems. These are arranged in a pattern of long parallel field boundaries divided by shorter transverse boundaries. They are often referred to as “brick” terrain systems because of their resemblance to the pattern of a brick wall.

Small ditch pens can often be found in the fields. While some were likely intended for cattle, others may have been settlements where Iron Age farming communities lived. Occasionally, traces of circular Iron Age huts can be spotted.

During the first years of World War II, anti-invasion defenses were built along the British coasts. These defenses included barbed wire, concrete anti-tank blocks, beach scaffolding, gun sites, casemates and coastal gun batteries. These defenses were positioned along those parts of the coast suitable for an invading force to land troops and materiel and most were built along the southern and eastern coasts.

A 1940 aerial photograph of Newhaven, East Sussex, shows a variety of war features, including lines of barbed wire stretching east along the beach in the distance. Several projects have mapped separate parts of the coastal defense and they can be tracked on the map with only short gaps where natural obstacles such as cliffs or swamps have made them unnecessary.

The map shows a long line of defenses along the south, south-east, East Anglia and Yorkshire coasts. The beach defenses were only part of the war landscape seen in aerial photographs and the map also shows some of the military camps, airfields, interior anti-tank lines and the anti-aircraft battery network built across the country.