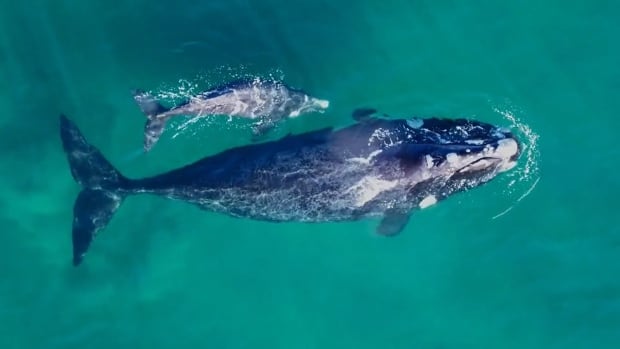 Without the tragedy that befell the North Atlantic right whales in 2017, a new documentary on the plight of one of the region’s most endangered species may never have been made.

The last of the right whales tells the stories of many people in Canada and the United States who are committed to studying and saving the North Atlantic right whale.

Nadine Pequeneza, the director of the film from Toronto, said that before the news of the rising number of whale deaths in a single year, she didn’t even know the animal was in danger.

“It was one after the other, and it really caught my attention because initially the cause of death was not reported and the autopsies had to be done,” Pequeneza said.

The species has long been in decline, but the picture changed dramatically when 17 whales were found dead in 2017, including 12 in Canadian waters.

Since then, 34 more right whales have been found dead in Canadian and US waters.

“When it emerged that it was the ship strikes and tangles that were really causing these deaths and that they were preventable, I really started to delve into it and then saw the whole story of the incredible struggle that this species has waged throughout its history since its contact with humans, â€said Pequeneza.

The documentary crew had to overcome a number of obstacles to shoot the film.

Like many things in life, the effort was affected by the COVID-19 pandemic, which limited when the film could be shot and the number of team members who could be in attendance.

But even before that, filmmakers had to meet a number of conditions to even start filming.

Since it had to shoot in various locations from the Florida Keys to the Gulf of St. Lawrence, the team needed the approval of two governments.

â€œWe had to show DFO that we were doing this in a way that would benefit the whales,â€ Pequeneza said.

Then, of course, there is the difficulty of filming whales in the North Atlantic.

â€œThe North Atlantic, in particular, can be very choppy and you need calm waters for filming, especially when using an aerial drone,â€ Pequeneza said.

The difficulty of filming on the ocean is compounded by the need to keep away from whales.

Pequeneza said one of the human subjects in the film, Canadian wildlife photographer Nick Hawkins, was instrumental in obtaining many of the impressive images featured in the documentary.

â€œNick built his own rc vehicle to bring a camera closer to the whales, which is a very interesting storyline that we follow throughout the film,â€ Pequeneza said.

The film contains a number of scenes that would disturb whale lovers.

It includes a whale entangled in a fishing rope, badly beaten and in distress, and autopsy images of whales as scientists attempt to find out how each died.

Pequeneza said the scenes were difficult and moving to film.

“It’s hard to see, and I know it will be difficult for the public as well,” said Pequeneza.

“I’m not saying that to turn off the audience. They have to see these things.”

The film will screen in theaters in Saint John, Moncton and Miramichi on January 23 and 26.

The January 23 screening in Moncton will also include a question-and-answer session with filmmakers and scientists.

The documentary will also air on CBC TV this fall.