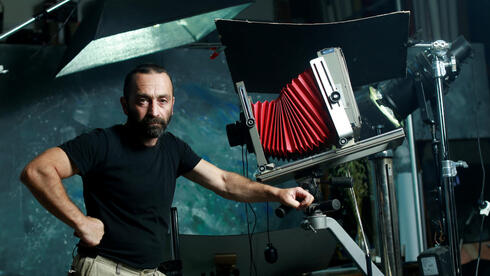 “My photo may crack but that’s what makes it valuable”

Edward Kaprov (46), takes photographs on glass using the collodion wet plate process, which dates back to the 19th century.

What is the Collodion process?

“The collodion wet plate process uses a light-sensitive chemical solution spread on glass panes. During the photography process, the liquid dries and the print remains. This method was developed in 1851 and was the first to allow photographers to leave their studio and shoot outdoors. Using this method, photographer Roger Fenton was able to capture the Crimean War. »

How was such an anachronistic method preserved?

“Mark Osterman was a legendary figure in the world of photography, who decided to revive this technique in the 1990s and it made a comeback.”

“The method is similar to analog photography, which uses film. I buy the chemical raw materials and create the Collodion emulsifier myself, which I then spread on a glass slate in A4 format. Then I dip this piece of glass in a solution of silver nitrate. The whole process is done in a dark room, so the light does not affect the state of the chemical solution. I then place the glass slate in a black box.

So your photos are more silver than black and white?

“Yes, because the color is affected by the silver nitrate that I add to the solution. That’s the beauty of this method. If you look at photographs from that time, even the light lines up differently.

Are you not afraid that your creation will crack? It is made of glass.

“I scan every photograph I develop, but it’s just a digital copy. If a Collodion photo cracks, then it’s gone. But that’s what makes it unique in the digital age. When there are no copies, the image has more value.

How did you get into this field?

“I studied photography and worked for years as a press photographer. In the age of the Internet, print is disappearing, so news outlets are investing less time in photography. Several magazines closed, and at one point I found myself unemployed, so I started to focus more on my artistic projects.

“As part of the research, I immersed myself in the character of (Theodor) Herzl in his book ‘Altneuland.’ I wanted to show Israel as Herzl had imagined it 110 years ago, at least as it appeared in the photos, so I researched what techniques were being used at the time and came across the Collodion process which m fascinated.

“I put the box in a special camera, then I take a picture. Then I open the aperture and expose the glass to light for 10 seconds. Then I go back to the darkroom and develop the photo. In the summer in Israel, the picture dries quickly and is ready in 15 minutes.

How did you learn a technique that almost fell out of use?

“I developed an obsession. For a year my life revolved around it. I bought 109-year-old books to learn the technique, which included understanding the chemistry behind it. Each day I was doing a few test shots to see if it was going well or not. It wasn’t easy. At a certain point, it undermined my professional perception of myself, because instead of focusing on my photography, I I became obsessed with perfecting my technique. I wanted to succeed, and after a year, I succeeded.

How much does a photo at the Collodion cost?

Can you live from this job?

“Unfortunately not, and that’s why I also regularly do commercial photo shoots and supplement my earnings as a porter.”

How long does each process take?

“After less than ten minutes of taking the photo, you can see the final result. But the whole process takes an hour and a half. It’s not like taking a picture for your passport. People come and I talk to them and I get to know them, because if I already know them or they’re familiar, I still have to make sure my topics stay on point, because it’s not that natural to have your picture taken. Especially in collodion photography, harsh light is directed at the subject, and it’s uncomfortable. The subject should sit or stand still and not move for ten seconds, because once I put the film in the camera, I can’t see it. That’s why they have to get comfortable in their pose before I see what it looks like. It is a kind of concentration like meditation. If you are photographed with intention, you have a pose and position that is preserved in the photo.

So why do people ask for a portrait at the Collodion instead of a regular portrait?

“The truth is, I’m still trying to figure this out. Collodion is a dramatic type of photography, but many don’t know about it. When they come to me, they’re shocked. They experience a type of realization as the process unfolds. Today you can take a picture immediately of anything – whether it’s what you eat or who you meet, or the type of screw you want to buy – that you take and send. thinking. And that makes the photo lose its value. When I take a photo at the Collodion, I meet the person and accompany them while they have to sit. Then they join me in the darkroom and see how their image appears on a clear glass slate. Photographers are always surprised at the result, as it differs from the mirror image of the subject. I’ve been doing this for five years and still look forward to seeing the end result.

Were some people disappointed with the end result? Or tell you it came out ugly?

“I would interpret that a little differently. I would say some people struggled with how their photo came out. That’s why I make it a point to have a little chat with them beforehand. Using this technique, only one image comes out. It is a unique photograph. People who come here aren’t afraid to look in the mirror. I’ve had a few instances where people insisted they “didn’t look like this in real life”, and I’d rather not take pictures of those kinds of people. I’m not here to please the subject. I want people to be happy with the outcome, but I also can’t do something I don’t believe in. I have to be honest with the photo.