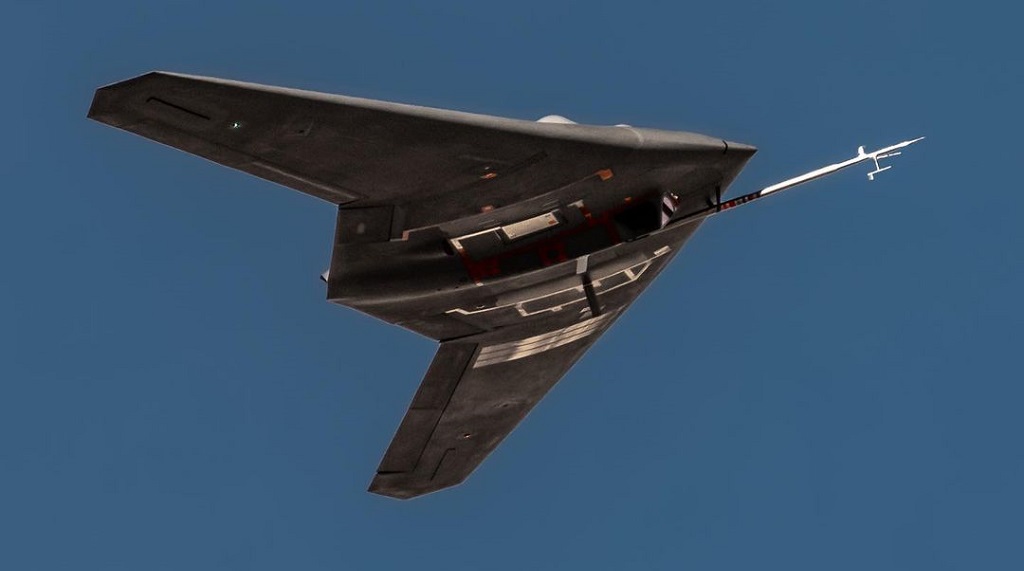 The drone, apparently in a test setup, was spotted over the desert south of Edwards Air Force Base.

The inconspicuous and unobservable unmanned aerial vehicle RQ-170 Sentinel, also known as the “Beast of Kandahar” (from which it was first sighted in 2007), recently made another appearance (witness) in the Californian sky. The drone, which has been spotted several times over the past few years, was photographed about a week ago by the photographer @point_mugu_skies, who was in the right place at the right time.

Although for obvious reasons he couldn’t provide the exact location, the photographer said the Sentinel was flying over the desert south of Edwards Air Force Base, with the location tagged in the Instagram post as El Mirage. Desert. The bright orange markings and boom in aerial data, along with the proximity of Edwards AFB, leads us to speculate that this particular cell is being used for some sort of test.

Over the years, the Sentinel has been seen in at least three different “books”: a white-cream color (like the one seen in Afghanistan and that of the crashed drone in Iran), a black and cream livery (spotted near Vandenberg AFB ), and the darker gray seen both last week in the desert and last year at Factory 42.

The test setup has been a constant in recent sightings, such as when it was spotted twice during the landing at Plant 42 in Palmdale, even though it missed the aerial data boom. The location of these sightings is also important, as Factory 42 is the birthplace of the RQ-170, as it was developed by the Skunk Works division of Lockheed Martin.

Even though nearly 15 years have passed since the Sentinel was first sighted, revealing its existence, we still don’t know much about this stealthy drone. The war zone tracked the drone’s sightings over the years and, based on their reports, Edwards AFB could be considered the eighth location from which the RQ-170 was operated, although the location where it was photographed in the week last is about the same distance from Edwards and Palmdale.

Other known locations are Kandahar, Plant 42 and Vandenberg AFB (California), as we have already mentioned, Kunsan Air Base (South Korea), Andersen AFB (Guam), Tonopah Test Range Airport and Creech AFB (Nevada). As you can see, these locations include both test missions and operational missions which, according to the little information available, are Intelligence, Surveillance and Reconnaissance (ISR) missions.

So let’s see what we know about this “shy” plane. This is what the US Air Force revealed in the official information sheet:

The RQ-170 Sentinel is a poorly observable Unmanned Aircraft System (UAS) developed, tested and commissioned by the Air Force. He will ensure reconnaissance and surveillance in support of the Joint Force Commander.

The Air Force’s RQ-170 program builds on Lockheed Martin’s advanced development programs and government efforts to rapidly develop and produce a low-observable UAS. The RQ-170 will directly support the intelligence, surveillance and reconnaissance needs of combat commanders to locate targets.

The RQ-170 is flown by the 432nd Air Combat Command Wing at Creech Air Force Base, Nev., And the 30th Reconnaissance Squadron at Tonopah Test Range, Nevada.

The RQ-170 Sentinel’s flying wing airframe is smaller than that of the MQ-9 Reaper or RQ-4 Global Hawk, with a wingspan of around 38 feet (11.6 meters). from satellite photos, and therefore comparable to the dimensions of a fighter plane. Like the Reaper, it is designed to be dismantled and deployed overseas inside transport crates carried by cargo planes like the C-17. This appears to be confirmed by documents about the Kunsan deployment released by the Freedom Of Information Act (FOIA), which mentioned that cells were airlifted there for deployment.

Not much is known about her performance as well, only rumors of a speed of 500 knots and a maximum altitude of 50,000 feet. It is also said that the Sentinel could use the same TF-34 motor that powers the A-10 Thunderbolt II or another similarly sized General Electric motor. The exact size of the RQ-170 fleet is unknown, but it is estimated that around 20-30 aircraft were built by Skunk Works at Plant 42.

As for appearance, the Sentinel shows the well-known grilled air inlet on the dorsal area, with two “bumps” believed to house SATCOM systems on the sides. On the ventral area is what is considered a modular payload bay for an EO / IR (electro-optical / infrared) sensor housed in a transparent faceted shroud (much like the F-35’s EOTS) and A Radar based on AESA (Active Electronically-Scanned Array) with SAR (Synthetic Aperture Radar) and GMTI (Ground-Moving Target Indicator) capabilities.

This payload is in line with the official mission of the drone, which was also said to have been on surveillance in Pakistan during Operation Neptune Spear, the US Navy DEVGRU raid that led to the death of Osama Bin Laden in 2011. Another role the Sentinel is known to have been used in is Targeting and Bomb Damage Assessment (BDA) for the B-2 Spirit bomber.

Last year, the US Air Force first mentioned the participation of the stealth drone in a Large Force Test Event (LFTE), involving F-35A Lightning II, F-22 Raptors and a B-2A Spirit stealth bomber and focusing on stealth penetration into no-go areas, suppression and destruction of enemy air defenses, and electronic attack tactics . It should also be noted that the role of the RQ-170 was not specified, which led to speculation about new roles other than ISR missions.

Like The war zone reported: “A patch associated with 732nd Operations Group, Detachment 1, the immediate predecessor of 44th Reconnaissance Squadron, features a lightning bolt, which is typically representative of electronic warfare, as well as three drops of blood, which could be a reference to a kinetic attack mission. It also included the phrase “forging the sword,” which could reflect a mission to develop new tactics, techniques and procedures, some of which may be related to the use of stealth unmanned combat air vehicles.

It was already considered likely that the Sentinel could carry electronic intelligence systems and electronic warfare suites, but this patch analysis, if it turned out to be correct, it could mean that the RQ-170 could now also carry weapons of certain kinds. However, this could only come at the expense of the ISR payload, as there is no indication that the drone has other provisions for internal payloads.

On the occasion of the LTFE, the Air Force also confirmed for the first time that the 44th Reconnaissance Squadron is flying the RQ-170, which is particularly noteworthy given that this appears to be the first official confirmation that this unit these aircraft without flying wing pilot. With this confirmation, it is now publicly known that the units are operating RQ-170s, the 30th and 44th Reconnaissance Squadrons, both assigned to the 432nd Wing’s 732nd Operations Group.

This year, the Air Force also first mentioned an RQ-170 deployment in an official press release, although no further details were provided as its operations remain highly classified:

Because [Gen. Mark] During Kelly’s visit in October, the 432nd AEW began conducting MQ-9 Reaper sorties out of Romania, successfully deployed and redeployed Sentinel RQ-170 forces, and inaugurated the next headquarters and building operations of the 25th Attack Group at Shaw AFB, South Carolina. […]

“RPA [Remotely Piloted Aircraft] meet the needs of today’s combat commanders – in both contested and uncontested environments, ”said Col. Stephen Jones, commander of the 432 Wing / 432 Air Expeditionary Wing. “The wide range of mission sets that the MQ-9 and RQ-170 are called upon to perform remains our hallmark – we don’t shy away from these difficult tasks; we remain ready to face them in all environments.

By the way, did you know that the RQ-170 also has another nickname? According to a 2010 memorandum from the 432 Wing leadership, in which base personnel were prohibited from disclosing information about the RQ-170s and their capabilities or from taking pictures of drones, these unmanned, flying-wing aircraft. were called Wraith. , rather than the official name, Sentinel. As you may remember, Wraith is also the nickname that was given to the all-black livery of an F-16 Aggressor in 2019.

Thanks again to @point_mugu_skies for the photos he sent us and be sure to follow him on Instagram for more!

Stefano D’Urso is a contributor for TheAviationist based in Lecce, Italy. He is a full-time engineering student and aspiring pilot. In his spare time, he is also an amateur aviation photographer and avid flight simulation enthusiast.