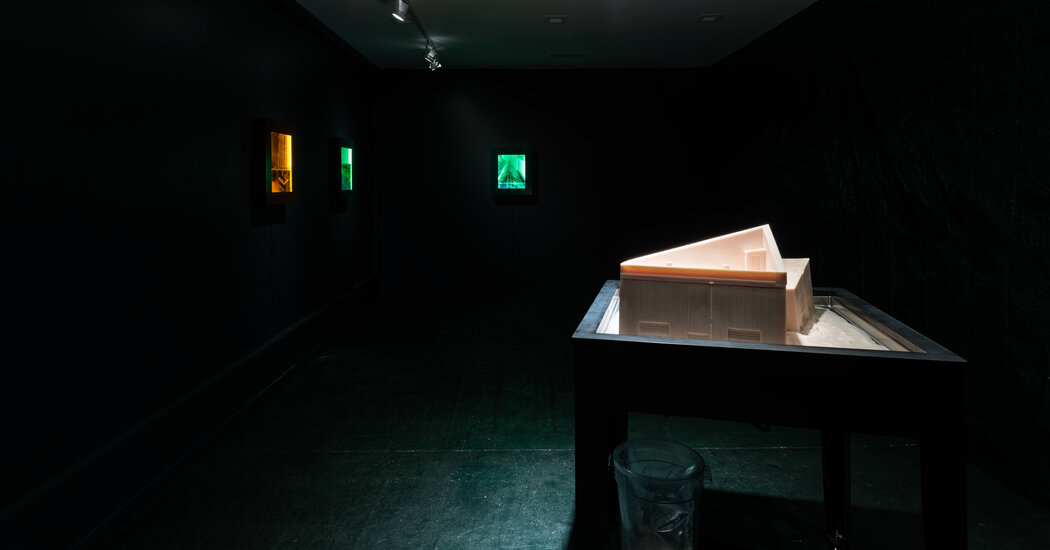 Other waters “rush in,” they say, though the sea seems deathly calm. We hear that “human aspirations, dreams and plans” have sunk with all the “temporary houses rented for temporary lives rented” and “all the pharmacies drowned”. These references, delivered as dreamy asides, echo Kline’s indictment of the American dream, consumerism, housing inequality and big pharma in the “Climate Change” series. But here, the bitterness of the previous work seems abstract, in contradiction with the placid drift of the film. The real sadness of the film is in the sense that – whatever happened, who is to blame, and who remains – all that matters is to continue species-wide survival activities.

Kline’s film is steeped in dystopian sentiment, “Blade Runner.” Indeed, its soundtrack, a hymn between synthesizer and sax arranged by beatmaker Galcher Lustwerk, pays homage to the strains that Vangelis composed for Ridley Scott’s film. Here too, the more or less hellish world of the near future serves above all as a backdrop for the existential questions of its human tenants. These dramas, of course, are quite short, even short-sighted, compared to the big shows on the planet itself.

As the divers pass around energy bars and bottles of what could be beer, the sun settling between the buildings and stretching golden above the flooded avenues, the voiceover softens and becomes indistinct, chattering, as if pieces of characters are overlapping. thoughts. There is talk of “human tears in the water”, a line that recalls the last words of the android at the end of “Blade Runner”: “All these memories will be lost in time, like tears in the rain.”

Even though Kline makes science fiction, its form embraces nostalgia. “Adaptation” was shot on 16 millimeter color film – the projector slams into the gallery on a derrick-like stand – using mockups and other practical effects. The choice to use film, rather than the digital rendering and seamless HD video that have become increasingly affordable to contemporary artists, is more than a rejection of this trend. That’s how movies were made – and maybe, he suggests, if computers break down or the entertainment industry collapses, they’ll be made that way again. But the film, too, looping and looping for the duration of the show, will also degrade…

This is the appeal of Kline’s work on climate change: whether or not countries meet their greenhouse gas reduction targets, whether global warming can be kept below the threshold, some degree of change is inevitable. Cities like Miami and New York will be facing – already facing – rising waters and unprecedented storm surges. However, Kline’s message in “Adaptation” is not necessarily one of doom or hope. We will simply continue to live in the ruined world.