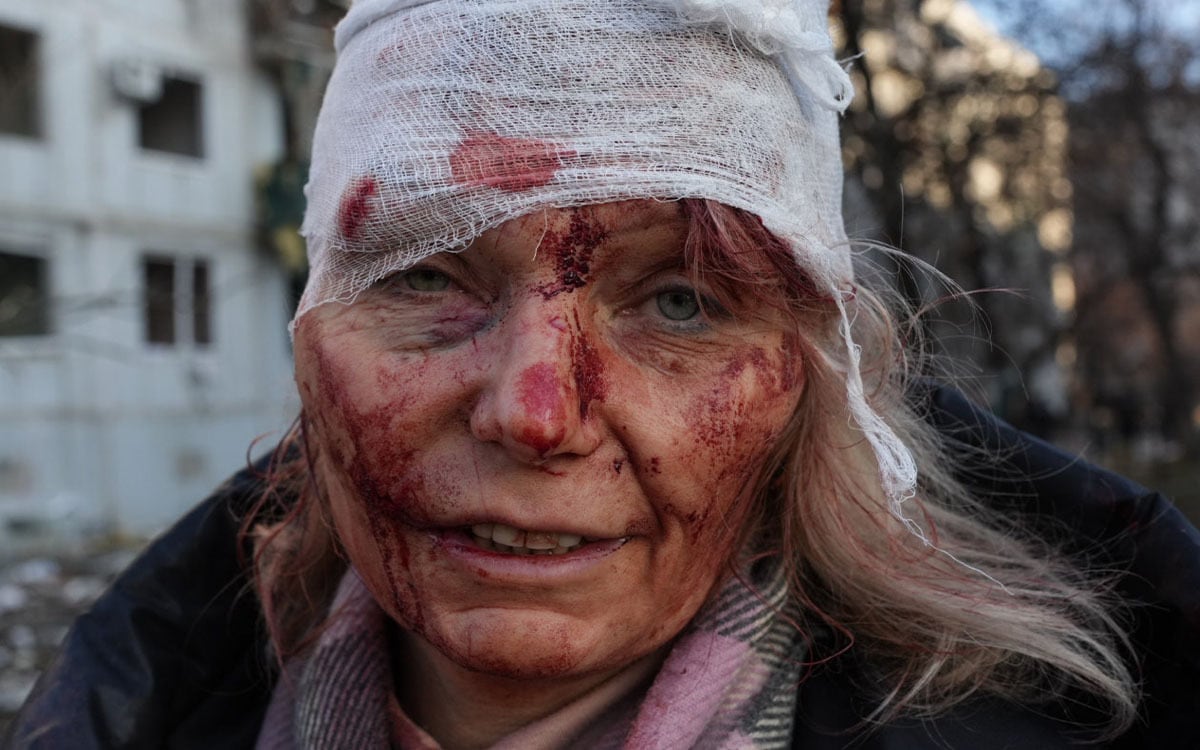 AShortly before 3 a.m. GMT, Vladimir Putin declared war. He did it on television, in a speech addressed to the Russian nation when the population was waking up. Missiles began raining down on Ukraine moments later. What threatens to be the most destructive war in Europe since 1945 had begun; the West’s worst fears have come true. After months of speculation and briefings, Putin, the increasingly deranged dictator of one of the world’s major nuclear powers, had struck.

“I made the decision for a military operation,” Putin said. The address appeared pre-recorded, with Putin apparently wearing the same suit and tie he wore at Monday’s Security Council meeting in the Kremlin, while an analysis of the video’s metadata suggested that it had been recorded no later than Monday evening.

The goal was the “demilitarization and denazification of Ukraine”, Putin said before implicitly threatening the deployment of nuclear weapons if the international community tried to retaliate with its own assault on Russian forces.

As a prelude to the attack, Russia had launched cyberattacks against the Ukrainian government, disabling the websites of its parliament, defense and security services and at 2 a.m., an hour before Putin’s speech was due. be televised, had issued a civil aviation advisory, closing all airspace over eastern Ukraine.

Minutes after Putin’s speech ended, eyewitnesses reported that the aerial bombardment had begun. In Kiev, just after 3:15 a.m., four explosions were heard in rapid succession emanating from outside the city, the target, according to reports, a military airbase on the outskirts of the Ukrainian capital.

“I woke up this morning to the sound of an explosion,” Valentina Butenko, 19, a British-Ukrainian student who had returned to Ukraine a few weeks ago to offer help in the face of the security crisis.

Simultaneously, Russia – as military strategists had expected – struck other cities with long-range missile firing positions on the border with Belarus, in eastern Ukraine held by Russian separatists and from Crimea to the south.

Reports have emerged of ‘something massive’ having just ‘exploded’ in Kharkiv, an industrial city just 20 miles from the Russian border that had been identified as a strategic strongpoint for Russia in any invasion . Photographs showed a huge ball of fire and a plume of smoke erupting in a suburb of the city. If anyone needed to be reminded of the horrors of war, this was the first proof. Footage would later emerge of a burning residential block in Chuhuiv, a small town just outside Kharkiv. Another showed the body of a rocket ship lodged in an apartment after a shelling in the northern outskirts of Kharkiv.

Ukrainian forces escort an injured man out of the wreckage of an apartment complex hit by the airstrike, his pants bloodied, anguish etched on his face as firefighters battle the blaze against the sky deep February blue. Another showed a woman walking away from the rubble of Kharkiv, blood dried on her face and a bandage hastily tied and wrapped around her head.

Over the next hour, explosions were reported in the southern Black Sea port of Odessa and in Kramatorsk, a frontline city that serves as Ukraine’s effective capital in the Eatsern war zone. Mariupol, another port city near Crimea, was also hit. If anyone had thought that Putin’s invasion would be “only” partial, it was proven wrong from the start.

From his official residence, Ukrainian President Volodymyr Zelensky recorded his own live speech, recorded on a cellphone, informing his nation that the country was under attack. A state of emergency had been declared the previous evening; now he imposed martial law. ” Do not panic. We are strong. We are ready for anything. We will defeat everyone. Because we are Ukraine. He urged citizens to stay indoors and not go out.

World leaders were woken from their beds to condemn the invasion. At 5 a.m. Boris Johnson denounced Putin’s “path of bloodshed and destruction” and warned against a “decisive response”.

Stock markets also woke up to the shock of the war. Asian stocks plunged and oil prices soared, the economic consequences of the invasion felt immediately.

Then, immediately after the aerial bombardment, and apparently according to the Russian military manual, the tanks arrived. The Ukrainian Border Service released CCTV footage showing tanks, armored vehicles and trucks crossing the border from Crimea to mainland Ukraine. They drove in an orderly procession with no obvious signs of resistance. The Russian army also had help. The Ukrainian Interior Ministry announced that Belarusian soldiers had joined Russia in the invasion from the north.

Pro-Russian separatists in the Donbass region launched a joint offensive from the east. At 6:15 a.m., Ukrainian emergency services said the Russians had captured villages in the eastern region of Lugansk.

President Zelensky had urged residents to stay put, but the climate of calm that had reigned for weeks had evaporated with the bombardments. As the shelling died down – around 5 a.m. – footage showed huge traffic jams as motorists tried to flee Kyiv at dawn; families said goodbye at train and bus stations. They also lined up at ATMs to withdraw their savings. The exodus inevitably headed west to the city of Lviv, 40 miles from the Polish border. Russia has also suffered an economic backlash.

The Kremlin, meanwhile, has again attempted to cordon off Ukraine, closing the maritime shipping lane in the Sea of ​​Azov that borders Russia and Ukraine, four hours after closing airspace.

The first reports of casualties came just after 7 a.m., four hours after the invasion began. Officials said at least seven people had died in airstrikes. Anton Herashchenk, adviser to the interior minister, said on social media that six people were killed and seven injured in an airstrike on a military base outside the Black Sea port of Odessa. One person died and two were injured in shelling in Mariupol. A photo taken by Julian Simmonds, a photographer for the Daily Telegraph, just after 8.15am showed an injured soldier lying by the side of the road near Bakhmut in eastern Ukraine.

As the sun rose, Ukraine took stock of the damage. Oleksiy Arestovych, an adviser to Ukrainian President Volodymyr Zelensky, insisted that the country’s military infrastructure had not been seriously damaged. “Most of the airstrikes were launched at 5 a.m. [local time]. on military infrastructure, airfields, ammunition depots and military command posts,” he said during a televised briefing. “The first strikes failed. There are casualties but they have not harmed the combat readiness of our forces.

Russian troops had made an “insignificant incursion” of only five kilometers towards Kharkiv, but there had been no major ground invasion.

But the real picture remains blurry. At 11:30 a.m., Ukrainian officials said Russian helicopters attacked Gostomel, a military airport near Kiev, but Ukraine shot down three of them from the sky.

Reports claimed that Russia had taken control of Antonov International Airport, just 15 minutes east of the capital’s ring road. Cellphone footage shows Russian helicopters attacking the airport in formation and plumes of dense gray smoke billowing from the scene. Meanwhile, a border post near Kiev had been destroyed by shelling.

The invasion had begun. Russia will claim victory in early skirmishes but war is far from won by Putin

50 facts about Oscar-winning ‘The Godfather’ – News