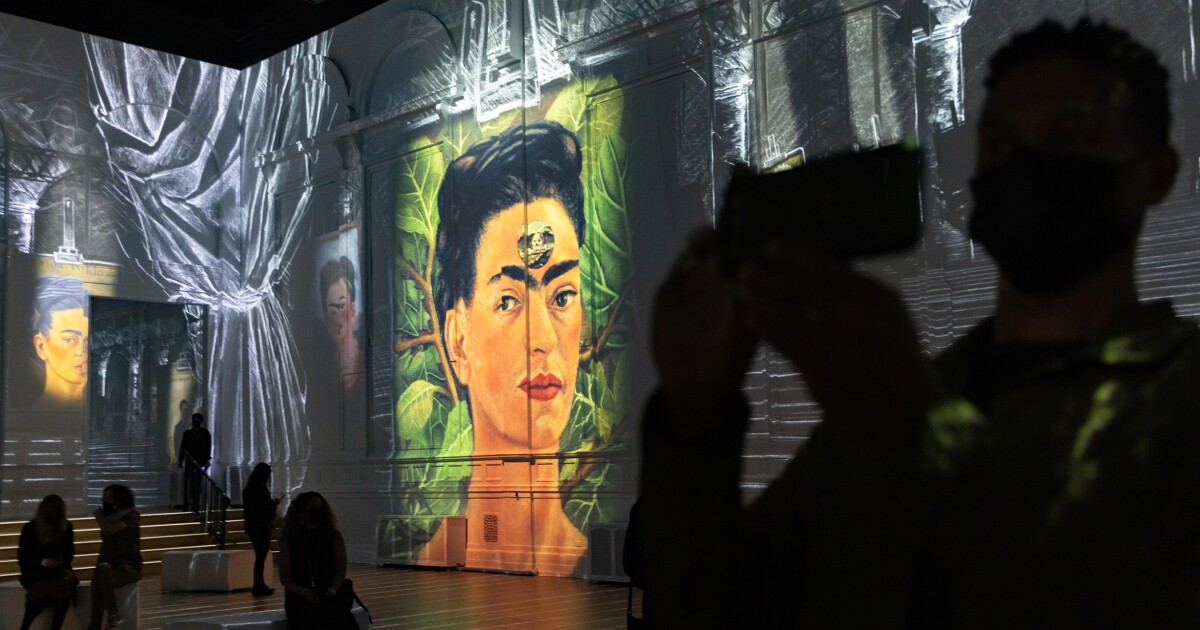 “Immersive Frida Kahlo” tells the story of an enigmatic Mexican icon who captured the imaginations of people around the world, but for Mara Kahlo, the immersive show celebrates the life of her dear great-aunt.

“The exhibit is amazing because not only does it capture Frida the artist, it captures Frida the woman,” Kahlo said. “The one who cries, laughs and sings with her guitar.”

Kahlo and her daughter, Mara de Anda, Frida’s great-grandniece, recently traveled to Dallas to promote the Lighthouse Immersive-produced show. The couple made similar visits to shows in Boston and Houston.

As President and Business Director of the Frida Family Foundation, Kahlo and de Anda protect the artist’s legacy by spotlighting projects that use her image and art.

“The family supports the show,” de Anda said. “We developed the exhibition with them, and I think it’s spectacular. This not only brings you closer to Frida’s works, but also to her life and her three loves: Mexico, her family and Diego Rivera. »

The show takes audiences on a visual journey through the artist’s life using some of his most iconic works. Her emotionally intense self-portraits are magnified and projected onto the walls of the Lighthouse Artspace in downtown Dallas.

It also incorporates photographs of Kahlo’s family, as well as historical images from the early 20th century.

“You kind of see what was going on at the time. A piece of the Russian Revolution and a piece of the Mexican Revolution,” Kahlo said. “You get an idea of ​​her political ideals, her philanthropy and why she wanted equality for all… For me, it was so important to see my grandmother Cristina on the walls, my mother, my aunts. It’s amazing to somehow bring all of this together in one art space and connect with Frida.

Kahlo and de Anda hope the immersive show will pique audiences’ curiosity about the artist and Mexican history.

“It’s amazing, especially for Mexicans, to see their star and their icon in a space like this,” Kahlo said. “Frida represents our Mexican roots. I think the show opens doors and moves hearts.

Although Kahlo never met her great-aunt, her name acts as a little keepsake in the artist’s mind. It is named after a character from the movie “Tarzan and the Mermaids”.

“Mara was the evil mermaid,” she said. “When Frida saw the movie, she loved the name and she signed letters to her lovers with that name. So Mara is Frida.

Do you have any advice? Email Miguel Perez at [email protected] You can follow him on Twitter @quillindie.

KERA News is made possible through the generosity of our members. If you find these reports helpful, consider making a tax-deductible donation today. Thank you.