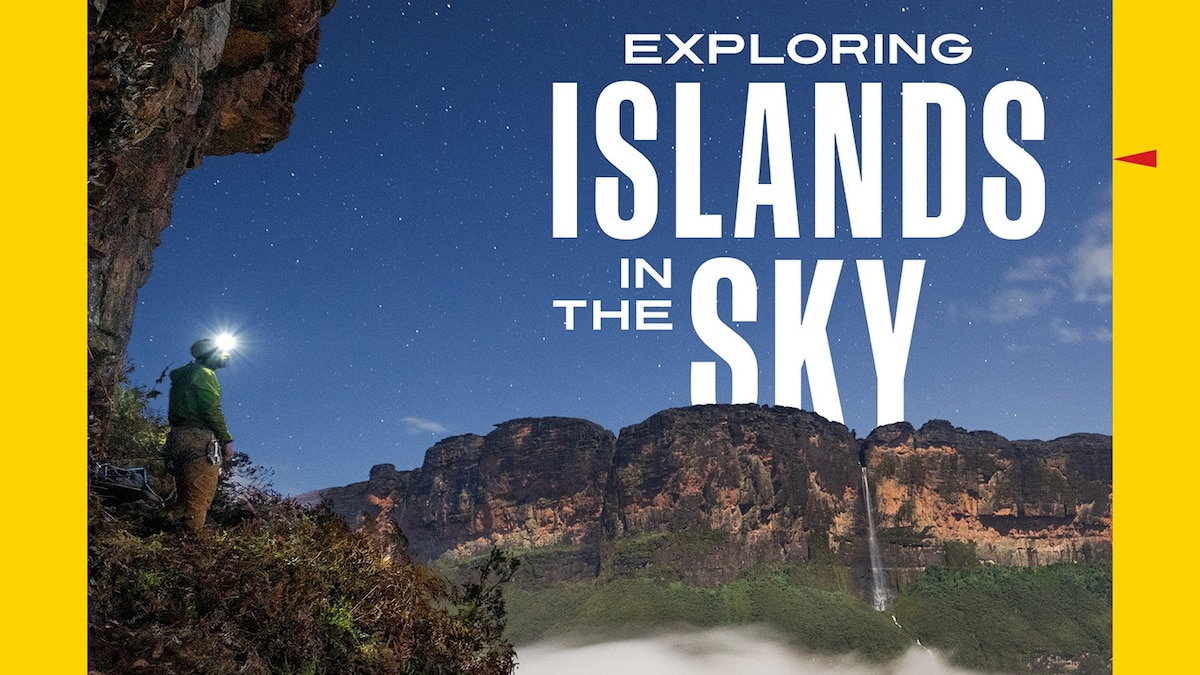 Before Renan Ozturk and his expedition crew could make the 700-foot vertical ascent of Mount Weiassipu, they had to tackle the jungle, enduring hard labor in mud, mud and storms.

Much to the amusement of the crew, Ozturk stuck his face in a river during the trip; his non-waterproof camera ended up completely submerged. Fortunately, Ozturk was able to dry the equipment.

After a strenuous climb up the wall of the table mountain known as the tepui – located in the area where Guyana, Brazil and Venezuela converge – the photographer captured breathtaking views of a waterfall in the rainforest and close-ups of the biodiversity the crew had come to document. Also a filmmaker, Ozturk was well equipped for the challenge, having started his career as an expedition mountaineer.

We recently spoke with Ozturk to learn more about his first National Geographic cover.

Thank you for respecting copyrights. Unauthorized use is prohibited.

What’s the story behind the cover?

The feature article is the result of a passion project, several years in the making. Ozturk’s mission: to explore the remote southeastern region of the Venezuelan rainforest and its tepuis, while documenting the ecosystems and animal species unique to the region. Ozturk says travel restrictions over the past few years and other challenges have postponed the project.

He was joined in this mission by Mark Synnott, an American professional climber and author who describes these magical formations as towers emerging from the jungle, and Bruce Means, a conservation biologist who has dedicated his life to protecting the area. .

Ozturk says his knowledge of mountaineering and climbing didn’t really apply to this expedition, where the crew instead faced the daily challenges of an unforgiving jungle. Throughout their journey to capture this image of the tepui that adorns the cover, the team relied heavily on the expertise of indigenous peoples to navigate the landscape and build their shelter.

“Getting to the base of the tepui to complete this vertical transect was some of the toughest terrain we had all been on,” says Ozturk.

The trip included a bush plane, an all-day boat ride on a river, and a roughly 60-mile trek through the jungle for a week and a half.

“The sky is not visible and this creates a claustrophobic world under the canopy,” says Ozturk. “You get soaked to the skin trying to move all this equipment and people safely through the jungle, through a lot of uncharted lands.”

What’s on the cover?

The breathtaking view with the sky, the summit of Mount Roraima and a 3,000 foot waterfall, with one of the expedition team members in the frame, was not easy to capture. Ozturk took the image from a hanging ledge covered in vegetation halfway between the base and the top of the tepui.

It was taken at a time when the team had finally completed their first ascent while searching for rare frog species on the tepui, which is considered an isolated biodiversity hotspot. Means had traveled to this area several times over the years, traversing the area to map the so-called frog paradise and better understand how life evolves on the isolated tepuis.

Over the years, Ozturk has mastered the dual role of expedition mountaineer and photographer, whose work has showcased epic wildlife and landscapes.

“It’s always the balance of not slowing down the adventure when you’re shooting these things, especially when you have these different story elements,” says Ozturk. “You hope that over time you will learn not to see filming and adventure as two separate things, but to be able to film seamlessly.”

The physical challenges of the environment took their toll on Ozturk’s body, as the crew walked, climbed, trudged and camped. While hanging in a harness aiming for the perfect shot, Ozturk says his legs went numb as he waited for hours for the sky to clear.

The weather created another technical problem: Ozturk had to work to keep his camera dry as the lenses kept fogging up from the humidity. He was constantly turning the lenses.

Eventually he prevailed, with a blanket that showcases the unique landscape of the tepus and the Paikwa River Basin. Ozturk hopes shining the spotlight on Means’ work will lead to significant conservation action in the area.

“Most people know this landscape from the Disney/Pixar movie. At the top— they don’t realize that it really exists and isn’t free from threats,” Ozturk says. “I hope Bruce’s work can lead to protection. It’s those environmentally conscious people who dedicate their whole lives to places like this that we need to support. »

The Ozturk Documentary The sanctity of space should be in theaters in May. This documentary covers climbing, the history of aerial photography and exploration.

Another great collaborative adventure with Synnott is also in the works for this summer, involving what Ozturk teases will be “one of the craziest sail crossings on Earth”.

The Walt Disney Company is the majority owner of National Geographic Partners.

Glam Tech takes photography to the next level with Glambank, the ultimate lighting ecosystem