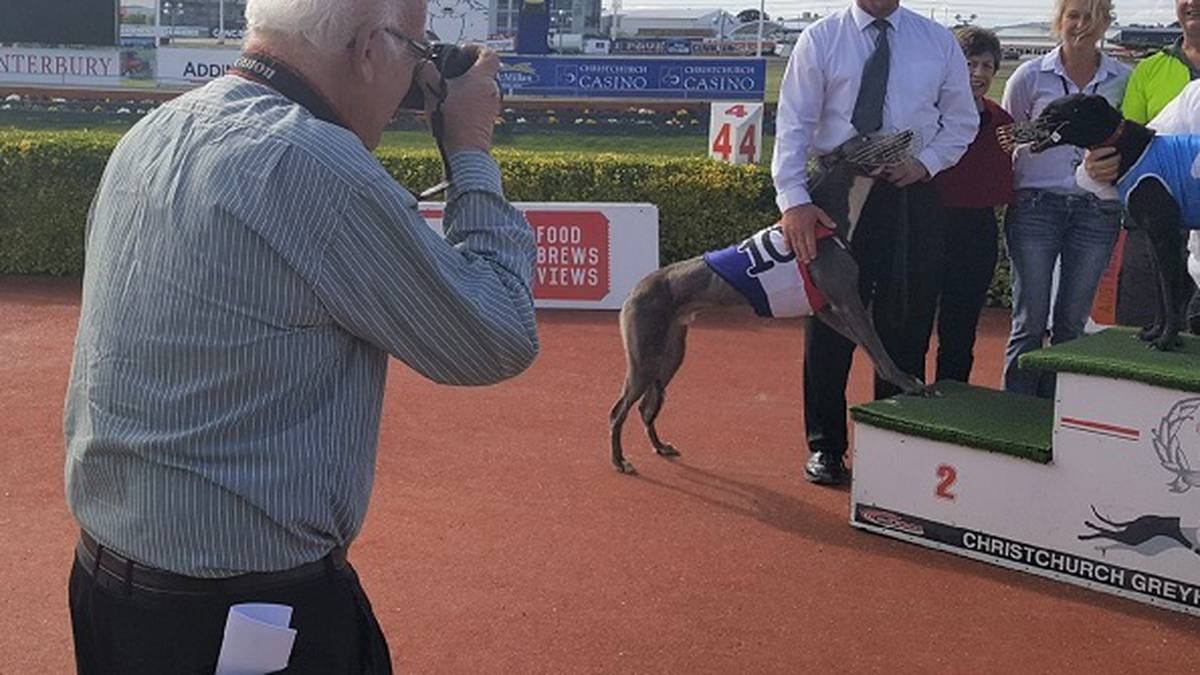 October marks 35 years that intrepid photographer Dave Robbie traveled to Christchurch from his home base of Invercargill and returned weekly to take greyhound racing finishes and podium photos.

Let’s do the math on this absolute marathon achievement.

The round trip is 1130 km and takes around 15 hours round trip. In the early years Robbie used to drive the trip twice a week, when Christchurch ran early and later in the week, returning to Invercargill in between.

“I think I went through 12 vans, three of which were cancelled,” Robbie estimated.

“I started with film cameras, which I had to develop. I used three before moving on to digital cameras, and I am now on my sixth.”

When asked what prompted the 76-year-old to take photos of greyhounds, he said: “Initially it was Neil Eade who had me take aerial photos of the farm. J used to drive all around the South Island to take or deliver photos.

“Then Merv and Bronwyn Eade asked me to shoot greyhounds at the Invercargill Showgrounds. This then expanded to include Forbury Park races.

“One day (1987) Rosemary Blackburn inquired for me to take pictures in Christchurch (QEII), and so began 35 years of driving State Highway 1.”

He is extremely grateful to a number of people in Canterbury industry who have provided him with accommodation over the years, in particular Janine McCook (Jopson) and, most recently, Ray Casey.

“I am very grateful to them. At times I have made a living fixing vehicles, cutting firewood and mowing lawns. I have done fair mechanical work on engines for a number of ‘coaches,’ said the handyman.

Obviously, with two reunions taking place on the South Island, Robbie enlisted the help of his family to ensure uninterrupted photo coverage.

Initially, daughter Luana was spotted at the Invercargill finish line, then later captured the Forbury Park finishes as well while dad continued to snap pictures of Christchurch. During Forbury Park’s final days, granddaughter Brianna filled in. More recently, another girl Kim was assigned to take the photos at Ascot Park.

Robbie’s major accidents included being hit by a truck, rolling over a bank, and being hit directly on his driver’s door, fracturing his pelvis, requiring admission to Timaru Hospital.

“I woke up in hospital after the Waimate crash. The buggers charged me with reckless driving – damn it, the other guy ran into me. The charges were then rightfully dismissed by the judge” , recalls Robbie, outraged.

“I’m still alive, so I think I have a good guardian angel looking after me. I guess I’ve made the angel work overtime sometimes! I don’t know why I keep on doing it (driving). I guess I like talking to people.”

He says he used to drink a fair amount of V energy drinks to help him stay awake while putting in long hours. “Ultimately the V didn’t agree with my stomach – these days I stop and take a little nap. Yeah, I’ve had a number of scares over the years , sometimes wondering how the hell I got to certain places.”

He was asked how his wife Sharyn coped with her continued travels. “She’s been great with it all. Sharyn has moved into a nursing home – I go to visit her every Saturday.”

Occasionally, Robbie has to multitask while taking his photos.

“There was a time when a dog fell at the finish line with a running lap to run. I grabbed it, put the dog between my legs and took the photo finish of the race.”

He also became an expert in taking “long distance” photos. On rare occasions he was caught doing other things and then had to rush off to take his final shot. Sometimes he didn’t quite get to his soapbox, taking the final shot of the harness track. “You have to zoom in fast – I always manage to get a good shot,” he laughed.

Robbie supplements his income by hauling a variety of nursery products, including plants, bushes and ready lawn – anything he can load into his pickup trucks and onto trailers. More recently, he can be seen at all Addington meetings taking penetrometer readings.

“I think I’ve taken millions of photos over the years. I feel like I still have two or three years ahead of me.”

We conclude this article with a clear illustration of Dave Robbie’s involvement in his racing photography. Last week, during the cold spell, he left Addington at 10 p.m. Thursday evening, with his vehicle loaded to capacity with nursery stock.

“It was a long drag. I was weighed down with a huge load (van and trailer). It was windy as hell which made me roll a bit. Got back to Invercargill at 9am in the morning.”

He was at the Ascot Park finish line to take the picture for the first race at 11.53am on Friday morning. This is an absolute commitment.

‘It only brings us together’: the challenge as deadly strikes bring war back to Kyiv | Ukraine