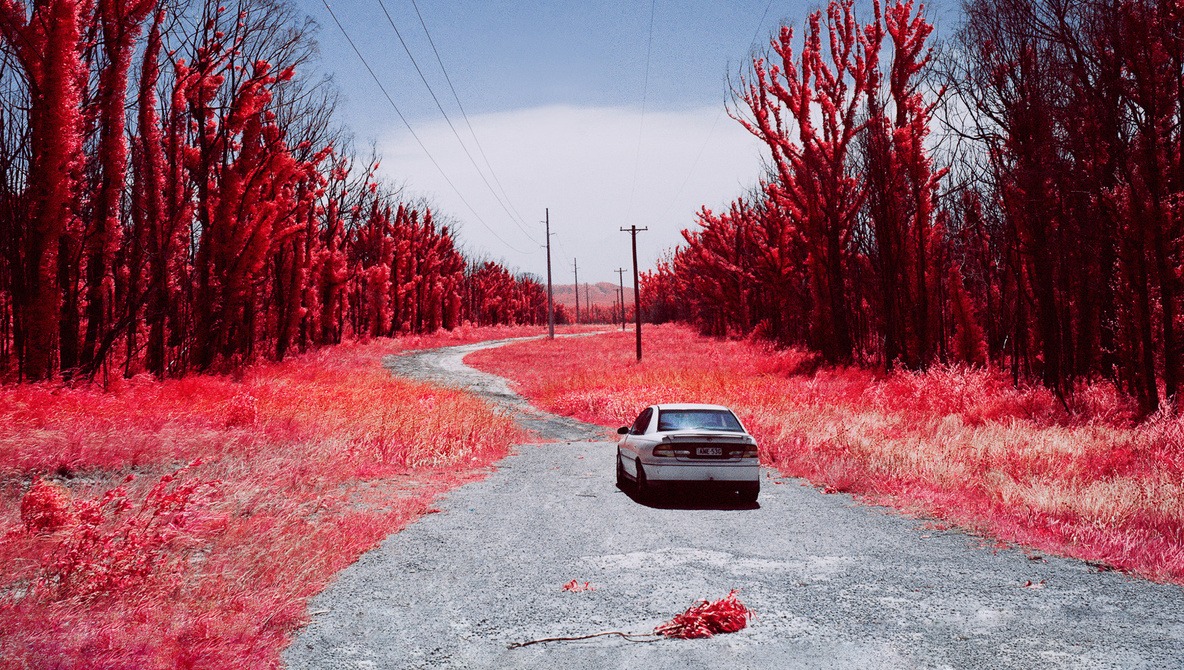 Australian photographer Rob walwyn hosts the first exhibition of his project ‘Karrikins’ as part of Sydney’s Head on the photo festival. Karrikins documents the aftermath of the bushfires that devastated Australia’s east coast in late 2019 and early 2020. What makes Walwyn’s footage even more astonishing is his use of Kodak’s Aerochrome false-color infrared film.

Apocalyptic scenes from the 2019-20 bushfire season made the news around the world as large swathes of Australia’s east coast burned. The bushfires destroyed more than 72,000 square miles of land, destroyed more than 5,900 buildings and, more tragically, 34 people lost their lives. The devastation was not limited to human lives either – the bushfires have been estimated to have killed more than three billion living beings. Yes, that’s right, three billion.

In the aftermath of the bushfires, Sydney film photographer Rob Walwyn traveled to different parts of New South Wales to capture the devastation and regrowth that occurred shortly after the bushfires. He decided to photograph what he saw using one of the few rolls of Kodak Aerochrome film he owned at the time.

I’d be lying if I said that the decision to shoot that first roll of Aerochrome on bushfire regrowth was anything but an aesthetic choice. I was hoping the new bright green regrowth winding through the trees would look beautiful on Aerochrome. It wasn’t until I got the first rollback and received feedback on the images that I thought this could make a really special project.

Kodak Aerochrome Film is a false color infrared film developed by Kodak in tandem with the United States Army during World War II. Originally it was designed for aerial photography with forestry, mapping and industrial and military applications, such as enemy camouflage detection. With Walwyn’s Karrikins Project, Kodak Aerochrome has been used with amazing results to document post-bushfire regrowth.

“Aérochrome captures infrared light reflecting off the regrowth in dark tones of pink and red, contrasting with the scorched and blackened trees, evoking images of the flickering flames that crept into these trees a few months earlier,” says Walwyn .

On his first roll, he captured what he thinks is the iconic image of the series: Karrikins # 1. The image shows the blackened tree trunks, which contrasts perfectly with the bright pink regrowth of the new leaves. With this image and the encouraging results of this first roll, the Karrikins project was born.

The name of the project is a nod to the bushfire regrowth that Walwyn documented through his photographs:

I studied chemistry in college and when I read about the family of molecules known as karrikins (the etymology of which derives from an Aboriginal word for smoke), which are produced during firefires. bush and can lead to the germination of dormant seeds of a variety of different plant species. I knew I had found the perfect name for my series.

Since that first roll of Aerochrome, Walwyn has documented the regrowth of the bush on more than 20 rolls of precious infrared film. Shooting both 120 and 35mm film, its cameras of choice have been the Pentax 67II, Mamiya 645, and the Fuji TX-2 (Xpan). During my chat with Walwyn, he told me about some of his favorite images below.

Karrikins # 1 was from his very first Aerochrome roll taken at Bilpin in the Blue Mountains in March 2020. It was the first image he posted to social media taken on Aerochrome.

The response and comments were amazing, not only in terms of the number of likes and comments this image received, which were orders of magnitude more than an average post, but also in terms of the number of people to whom i Sent messages for questions about the prints and to find out. more on this movie. The fact that I took this image, which is the archetypal photo in this series, on my first roll, makes it even more special to me. This image is taken from the Bells Line of Road side, an area particularly devastated by the 2019-2020 bushfires.

This flower is not endangered as a species; however, they appear so rarely that many walkers have never seen them. The flowers favor heathland and open forest areas at altitude.

The seeds can lie dormant for years, waiting for a special confluence of events forming the right conditions for their emergence – about a year after a bushfire followed by rains, which is exactly what the flower’s turf has experienced. Last year. When I saw pictures of these rare flowers popping up on social media, I knew this would be a perfect subject to shoot on Aerochrome for my series.

Karrikins # 14 is another of Rob’s favorite images from the show to date.

This image was taken in September 2020 in Yaouk in the Snowy Mountains of New South Wales. Just seconds after taking the photo, the light finally broke through this otherwise cloudy and rainy day and perfectly illuminated the scene with a beautiful light and a beautiful rainbow – of course I missed those beautiful conditions. ‘lighting as it was the last shot the roll, but maybe the cows wouldn’t have lined up and looked at the camera a few moments later, so maybe everything was fine passed anyway.

Finally, I asked Walwyn to tell me about my favorite picture from the show. It shows a group of young people taking selfies and having fun in a swimming pool, as haunting pink regrowth and blackened trees loom behind them.

It’s also the Snowy Mountains, from the same trip as the cow blow. The pool is thermal – naturally 26 degrees all year round. It must be quite pleasant to visit the pool in the winter when it is freezing. I saw a picture of this pool on social media and the fact that there were these beautiful trees in the background and the mountains were ravaged by bushfires, contrasting with the people frolicking in the pool and were having fun, that’s what made this picture special to me.

These are just a few of the hundreds of stunning infrared photos Walwyn took using Aerochrome for the Karrikins project. He meticulously reduced the images to just 17 for his first exhibition ‘Karrikins’ November 24-28 at the Barometer Gallery in Paddington, Sydney. The exhibition is part of Sydney’s Head on the photo festival, which takes place in dozens of galleries and outdoor spaces across the Emerald City through November 28. The festival also offers workshops and round tables.