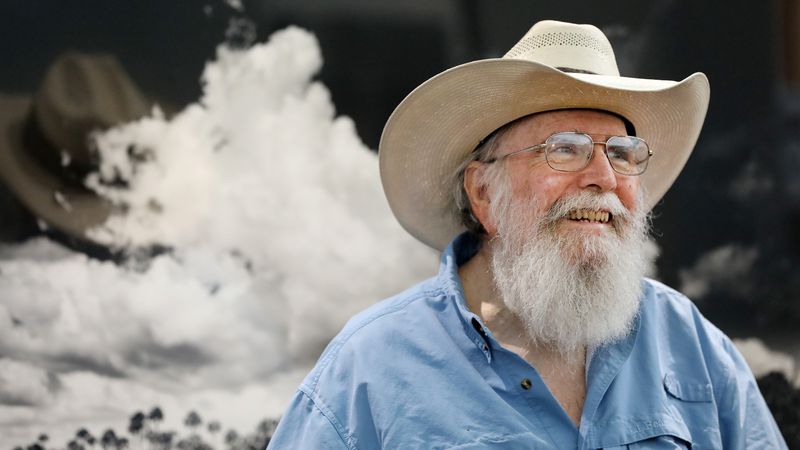 Five photos of Clyde Butcher, a big camera and the stories behind them

CLEARWATER – Florida Artist Hall of Fame member Clyde Butcher has established himself as the foremost landscape photographer of the 21st century, documenting America’s natural beauty with a passion for the Everglades. His photography has been the subject of documentaries and exhibitions around the world.

Now the public can see Butcher’s vision at a free exhibit at the main branch of the Clearwater Public Library in downtown. â€œAmerica’s Evergladesâ€ features Butcher’s large-format black-and-white landscape photography of the subtropical Florida, its flora and fauna, subjects he has documented for more than three decades.

The exhibition is presented by the Clearwater Community Redevelopment Agency in a gallery. Until May, it coincides with the 75th anniversary of Everglades National Park in 2022.

Butcher moved to Florida from California in 1980 and fell in love with the state’s nature beyond the beaches.

The exhibit also discusses the conservation of endangered habitat, which Butcher has been advocating since he began his work. At a press conference in Clearwater on November 5 Presenting the exhibit, Butcher said he takes every chance he can to share Florida’s nature and beauty with people, to show them “where their oxygen comes from.”

With 35 large-format photos, a video, and Butcher’s 8-by-10-foot camera, the exhibit immerses you in Butcher’s view of the Everglades, a welcome vantage point for those too afraid of snakes and snakes. alligators to set foot in the wilderness. For those who aren’t afraid, swamp tours are available through Butcher’s Big Cypress Gallery in Ochopee.

Butcher has had his fair share of dealings with wildlife. He regaled press conference attendees with a story of encountering a 12-foot alligator while shooting with a fellow photographer who was new to the Everglades. They were in the water with nowhere to go, so Butcher grabbed a paddle from the canoe that had carried their camera and film, and hit the alligator in the nose, a sensitive area. It exploded in the air and went the other way.

Butcher also told the stories behind some of his incredible photographs.

“Moonrise” was the first photograph Butcher took after the death of his son, Ted, who was killed by a drunk driver at age 17. To deal with his grief, Butcher retreated to the Everglades. He had previously made color photographs for commercial and artistic purposes. But on this occasion, he decided that Florida’s natural beauty was best expressed in black and white, so he destroyed his color work. He was using an older lens and the shutter was not working, so he had to manually create the exposure.

When asked why he prefers black and white to color, Butcher said capturing nature in color has so much green it makes him want to throw up. â€œBeing there is good, but as a work of art it doesn’t work,â€ he said.

Butcher described how arduous the commitment to large format photography is with this photograph of “Fakahatchee Strand # 3”. He had to walk 3 miles with a backpack containing an 8-by-10-foot camera film, lenses and tripods, a load that weighed 65 pounds in total. It was also in August in Florida. So that was a mission, but he got the picture, which he says is especially special now because the Guzmania bromeliads pictured went extinct due to an invading weevil from Mexico. He likes the otherworldly quality of the image.

â€œWhen you go up in the Everglades, you discover places that people have never seen before because there is nothing like it in the world,â€ he said.

It took Butcher nine years to perfect his image of Cigar Orchid Pond in Big Cypress National Preserve. He called the picture his favorite. Cigar orchids are not shown because they are found at the bottom of the pond, making them difficult to see. Beginning in 2000, Butcher found the place and took it on an annual hike with his family on New Years Day to capture an image, but various factors, including poor lighting, continued to prohibit the perfect shot. In 2009, everything aligned and he was able to get this image. Butcher said that one of his tour guides had researched the location for years before finding it, although he had come across it hundreds of times. Butcher attributes this to his own perception of the composition.

As Floridians know, you don’t have to look far to experience the state’s nature and wildlife. “Big Cypress Gallery # 14” was taken from the parking lot of Butcher’s workshop. He says gallery visitors often ask him where he goes to photograph in the Everglades, so it’s in the blink of an eye that this photo, taken with a wide-angle lens, exists.

â€œThe problem is people can’t see,â€ he said. â€œYou have to learn to see before you can take pictures. “

The famous and elusive Ghost Orchid was the subject of a crime and a subsequent book, The orchid thief, and a movie, Adaptation. Butcher has his own dramatic story of venturing out to capture the flower. In 1999, he and a friend left in the dark at 4:30 a.m. He didn’t take a flashlight and stepped on a water moccasin. He said it was as if a hammer had hit him in the heel. As he made his way to the hospital, he decided that because he wasn’t feeling too bad he could change the route and take the picture. He thinks he had a dry bite or that venom was removed during the hours he was in the water.

The triptych depicts the same plant flower in 2000 and 2001. Butcher explained that plants die when pollinated.

Another highlight of the exhibit is Butcher’s 8ft by 10ft camera he used in the field. Now he calls it a “dumb” camera. The film measures 12 feet by 20 feet. The camera without a lens weighs 45 pounds. The lens weighs 5 pounds and the film holders 30 pounds. The tripod is 15 to 20 pounds. In order to print such large format photos, Butcher had to design his own equipment.

Butcher suffered a stroke in 2017 and now uses a digital camera to capture his stunning images. Using a walker at 79, he still returns to his beloved Everglades, despite being on his third rollator due to the severe effects of salt water on the bearings.

He said he’s taking more photos than ever and believes people with similar conditions should get out there and be active.

â€œNature is one of those things that really helps you heal,â€ he said. â€œIt doesn’t matter who you are. There is no politics involved.

If you are going to

The winners of a new landscape photo competition that rewards realism