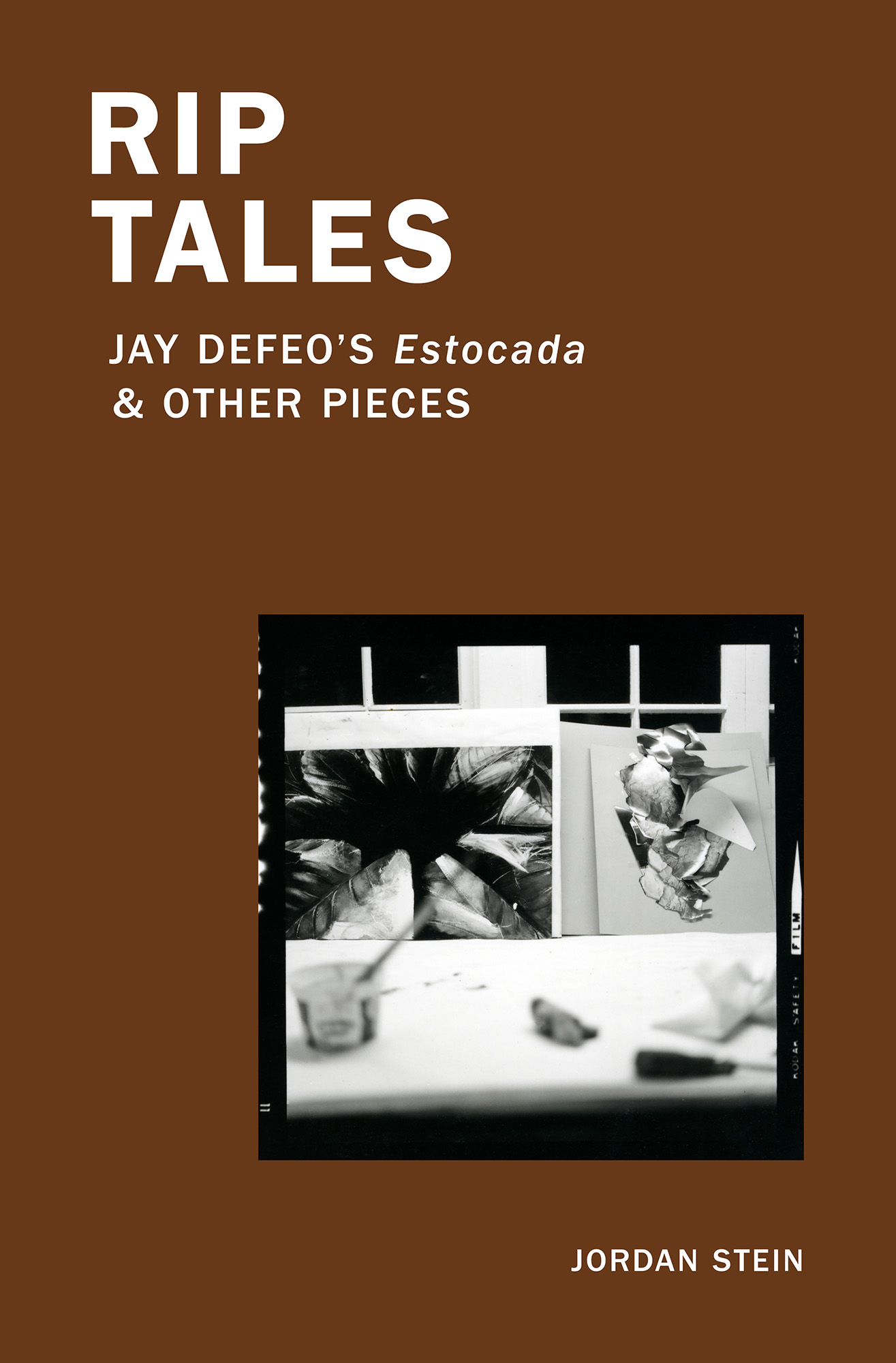 Estocada and Other Songs by Jay DeFeo – The Brooklyn Rail

Jordan Stein’s Rip Tales: Estocada and Other Songs by Jay DeFeo takes the idea of ​​a work of art that has gone from creation, to destruction, to resuscitation as the premise of a book that offers much-needed insight into the ecology of the Bay Area art scene. Stein, a writer and curator who moved to California in 2003 to pursue graduate studies at the San Francisco Art Institute (SFAI), and later founded an independent exhibition and program space in the city’s Mission District, offers a insider’s view of an art scene that is narrated but often ignored. At the center of the book is the evolution of thrusta work on paper that Jay DeFeo started in the late 1950s but was forced to remove from a wall in her home studio (which was basically a hallway) when she was evicted from her apartment on Fillmore Street and forced to leave San Francisco for Marin County.

Stein traces the evolution of the work through a series of vignettes interspersed with anecdotes drawn from his own participation in this scene and from interviews he conducted with other local artists and cultural workers. tearing up the tales is not just a study of DeFeo’s tenacity as an artist, but an oral history project that connects a multigenerational group of artists, including concept artist Lutz Bacher (who has never revealed his birth name), portrait photographer April Dawn Alison (the private figure of commercial photographer Alan Schaefer) and sculptor Vincent Fecteau. A common thread that connects DeFeo and other star artists is a trend toward experimental art practices that allow for the gradual accumulation of ideas or the meditative realization of new approaches away from public view and intentionally disengaged from the marketplace. This is partly due to the unconventional nature of the local art scene, a place where artists have worked without the pressures of a robust art market for decades and often survive by teaching or adopting other lines. of work. For artists like DeFeo, who began his career in the pop-up artist-run spaces that were central to Beat generation activity in San Francisco’s North Beach neighborhood, being free from mainstream influence was essential to the maintenance of artistic autonomy, allowing the creation of works that were neither precious, nor lasting, nor even intended to be shown. Weaving her study of DeFeo’s work with interviews that touch on these questions, Stein presents a model for how documentation and analysis can be used to honor the region’s idiosyncratic artistic practices and the artists who have resisted it. which he identifies as “the gravity of the art world”. larger centers and schools or hierarchies of practice.

The author begins by recounting the historical context of thrust, delving into the type of work DeFeo was producing at the time, which included heroically constructed multimedia paintings, while recounting the circumstances that led to his initial demise. Indicative of the book’s reflective tone, Stein considers what it means to be in search of a work of art whose pieces are known to be missing or scattered among institutions (in this case, San Francisco’s fine arts museums and the Jay DeFeo Foundation). “How do we count ghosts?” he asks: “We circle an absence. We listen to the voice of the artist, an echo. We will look. This think-aloud example sets the stage for the rest of the book. Likewise, thoughtful interludes appear throughout. For example, when discussing the work of Lutz Bacher, he observes that “we often look to art for coherence, abandoning its ability to clearly reflect its opposite”. As Stein seeks to uncover coincidental hidden histories, he points to the larger philosophical implications that can be drawn from the experiences of artists who are not easily discouraged, despite long periods of obscurity.

thrust is a silent work that had largely faded from memory until now. Consisting of abstractly painted sheets of wallpaper stapled the length of the wall, work was underway when DeFeo was forced to tear it down after her landlord forced her out of the apartment. Although she considered the work to be a drawing, Stein notes that it was rendered with heavy layers of paint, an approach that defined the early period of her artistic practice. Its torn edges became a feature of later works on paper, although they were the result of circumstance rather than a conscious decision. That the artist finally accepted the fate of drawing and began to see tears and rough edges as “elements of composition” seems to have been necessary to survive the setbacks in life that impacted his ability to continue to create large-scale paintings. DeFeo adapted, and although her productivity was inconsistent for several years after being kicked out, she eventually turned to photography, drawing, collage, and Xerox art. pieces of thrust were stored under his bed and later reused in new works or photographed in such a way as to reinvent or “translate” his painted forms.

In San Francisco, DeFeo also feverishly develops his monumental painting The Rose (1958-1966), whose exploding star composition and volcanic surface weighed almost a ton due to its multiple layers of paint, plaster and wooden dowels. The story of this work and its removal from its Fillmore Street flat – through a bay window that the movers widened by cutting into the facade of the building – is the stuff of legends. (The process was recorded in by Jay De Feo Painting removed by angelic hosts [1965]a short film by Bruce Conner, DeFeo’s close friend and arguably the most irreverent artist of the day.) Stein tells the story of the outsized work in a chapter devoted to his early paintings, recounting his extraction of the apartment, its inclusion in DeFeo’s first museum exhibit in Pasadena, which was initiated by Southern California curator and gallerist Walter Hopps, and its eventual placement behind the wall of a conference room at SFAI, where it was hidden and needed repairs for more than two decades.

The book’s detour into the artist’s career-defining work not only establishes DeFeo as a relentless and fearless artist, but also introduces her artistic community, which, in addition to Bruce Conner, included her then-husband, the artist and gallerist Wally Hedrick — whom she parted ways shortly after the expulsion — and painter and SFAI administrator Fred Martin, whom she knew from UC Berkeley’s undergraduate art program, where they formed a tight-knit group of rebellious art students with painter Sam Francis in the mid-1940s. It was under Martin’s leadership that the Institute erected a wall in front of The Rose in order to make room for student work, an act that essentially covered it up, removing it from public view, and thereby burying a critical moment in the region’s art history. In his own published writings, Martin describes their relationship as one of great camaraderie and admiration, but argues that their generation of Bay Area artists were more concerned with creating art that reflected their subjectivity and reflexivity, rather than material longevity. It tells the story of finding a large painting he had given to DeFeo propped up in his garden strewn with water damage from a nearby sprinkler.

Stein’s interview with longtime San Francisco residents Steven Fama and Mary Miller in the book’s final chapter shows how Bay Area artists have rejected the idea that art is exceptional. and should be treated as a precious commodity. In 2007, the couple became guardians of a 9ft by 5ft painting by Conner titled Tribute to Jay DeFeo (1991). Rather than sell or store the work, Conner entrusted his friends to hang it in their homes on long-term loan. Shortly after realizing the large painting couldn’t be displayed indoors, however, Conner suggested hanging it on an area of ​​the fence that bordered their back garden. Years of exposure to sun, rain, mist and wind outdoors have left the painting crumbling and, over time, pieces of its canvas ripped from the stretcher by the elements were collected in a plastic bag and stored in their garage. Only the frame of the painting remains intact, which they left hanging in the yard. Conner died before he fully disintegrated, but had assured the couple that he would not be responsible for any changes to his original state. The black and white painting contained a sketched square with a darker shape that resembled a question mark in its center and a less developed shadow formation above it in the upper right corner of the canvas. The connection to DeFeo in his title is left open to interpretation, but the story of his life, death, and rebirth is clear. Conner placed the work outside, knowing that it would essentially crumble and he would not see it in its final state. Fama notes that the painting will likely outlive him as well.