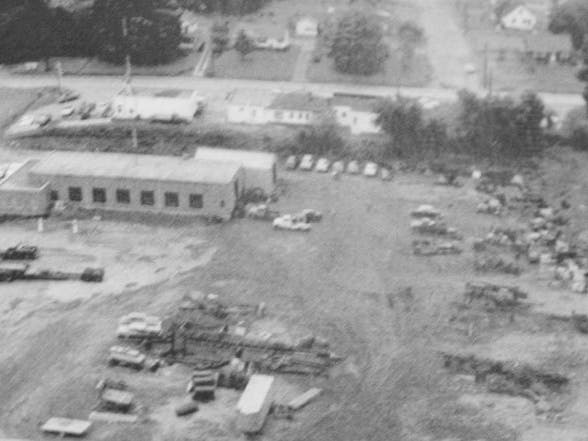 ENFIELD, CT – Today’s time travel takes us through the pages of a beautiful photo book, Enfield: 1950-1980, a collection of photos taken by famous local photographer Ed Malley and compiled by his son Jim.

This is a 1960s aerial view of King’s Korner, at the junction of King Street (Route 5) and Depot Hill Road. The Della Construction Co. office building and construction site, founded by Nick DellAquila, dominate the photo. This area of â€‹â€‹Depot Hill Road is currently home to Tri-State Kenworth.

Here’s a more contemporary look at the site, courtesy of Google Maps.

Trivia response from last week:
Last week’s trivia question was, “What popular Enfield business was Paul Polos owned?” The answer: Pete’s Pizza, which operated for many years at 127 Elm Street. When the reconfiguration of traffic patterns and intersections around St. James Avenue, Carol Street, Riviera Drive, and Elm Street took place in the 1990s, the building that had housed Pete’s Pizza and Wenc’s Package Store, and later housed Gem Jewelry, was demolished to provide a straight alignment of Freshwater Boulevard in the St. James neighborhood.

This week’s trivial question:
In its first season in business 50 years ago, the Fermi High School football team had a respectable 4-6 record. The Falcons’ first victory came in Week 3, a 32-12 win. Which school was the victim of this defeat? Post the response in the comments section below under your real name (we’ll see who follows the instructions).