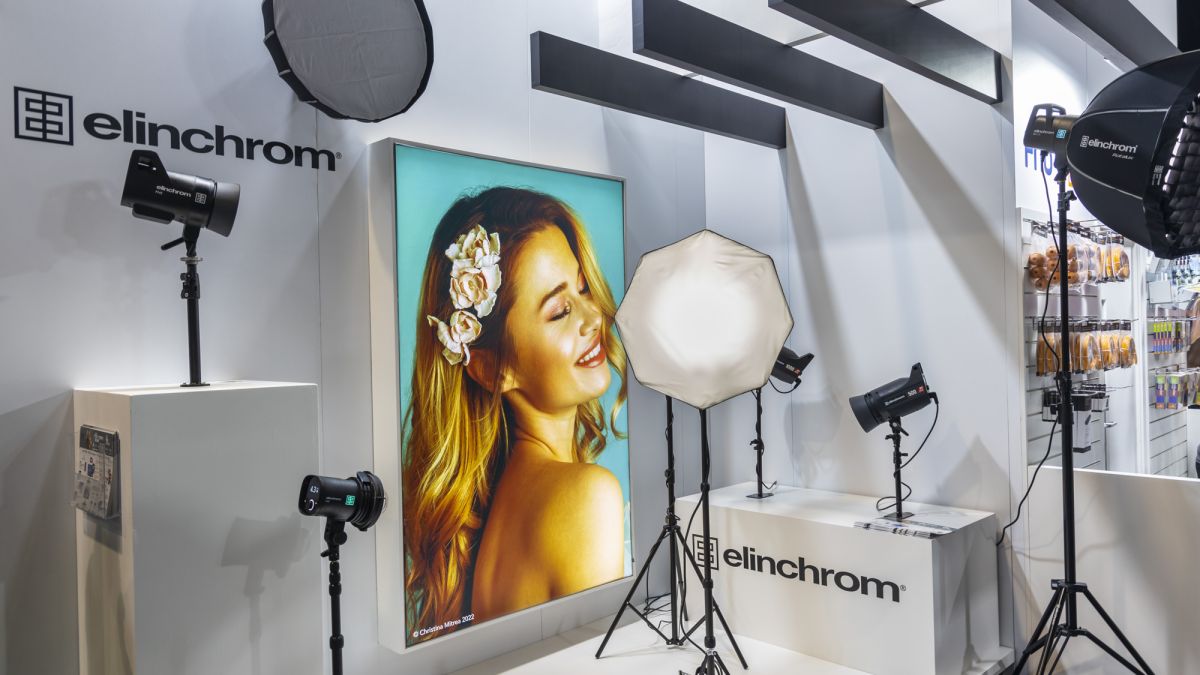 Elinchrom Five available exclusively at the Photography Show in the UK

We caught up with The Flash Center at stand F406 at the Photography Show at the NEC in Birmingham, UK to check out some of their new products recently launched at the show.

The Flash Center, which also distributes brands such as Tether Tools, Phottix, Frio, Benq, Spekular and Hahnemule, among others, showed us the new products launched for the first time yesterday at TPS by Elinchrom, Stella Pro and Calibrite at The This Year’s Photography Show.

This is our expert guide to the best photography lighting kits, and you’re bound to find an Elinchrom kit there.

Elinchrom unveiled the new battery-powered Elinchrom FIVE at the Photography Show. Visit Flash Center booth F406 to see the flash head powered by a 522 W/s battery that can last 82 watt hours, or can be plugged into the mains if used indoors. It’s supposed to fully charge via USB-C in an hour and a half and last for 450 full-power flashes from a single charge, although we haven’t fully tested it yet.

It is said to be color accurate to +50 or -50 Kelvins for super accurate colors and weighs 3kg in total when the battery is attached. It features the Elinchrom mount for attaching modifiers and accessories and is capable of TTL and HSS with an attached transmitter. A 27W bi-color LED modeling light is also built in, allowing users to get an idea of ​​where the light is falling when shooting photos and videos, making this an even more versatile light. .

The Elinchrom Five is available exclusively at the Photography Show in the UK with a global launch from next month. Visit stand F406 to familiarize yourself and pre-order with a £100 deposit. Save £170 with their special GST price of just £1,449 (regular RRP £1,619).

Stella Pro unveiled two new lights at the Photography Show, the Reflex and the more powerful CLx10. The Reflex is a small, portable light capable of delivering up to 6,000 lumens in continuous mode and 12,000 lumens in burst mode with the battery grip. It’s able to instantly switch between digital and burst lighting and has an ultra-portable, rugged design weighing less than 2lbs, so it’s ideal for weddings, action, sports and photography. portraiture and videography. It’s got an £87 reduction at the show, so you can pick one up for £925 at stand F406.

The CLx10 is a larger light with a built-in battery that can last up to 245 minutes and has an IP65 weatherproof rating, making it ideal for rough terrain and all-weather adventures. The built-in RF receiver allows wireless control of any number of CLx10 lights from the wireless remote and features a high output “Chip on Board” COB LED. It has a special GST price of £1,075, a saving of £237, so head over to stand F406 to check it out.

Calibrite introduced us to a new product, the Color Checker Passport Duo which combines the best parts of the Classic Nano and Classic Mini Color Checkers for both photo and video and will be a great all-in-one accessory for hybrid professionals who need to versatility and color accuracy. for stills and video footage, and works seamlessly with Calibrite color grading applications such as CC Profiler, CC Studio and the soon-to-be-launched Calibrite Profiler software (see below).

Also featured was a demonstration of the new Calibrate Profiler software, an upgraded software that combines the older CC Profiler and CC Studio applications for a more streamlined workflow. It will run on the same Xrite engine and will be a free upgrade for users of Color Checker monitor calibrators, although there is a paid upgrade path for users of other monitor calibration devices. Xrite screen such as the Color Munki. More details on the Calibrite Profiler will be announced next month.

here are the best monitor calibrators (opens in a new tab) you can get now, and best led panel lights – if you’re looking for something a little more portable.

Top 10 Strategies to Boost Your Credit Score in No Time

More a curiosity than a harbinger, the story of aviator James Martin’s first flight to Alaska