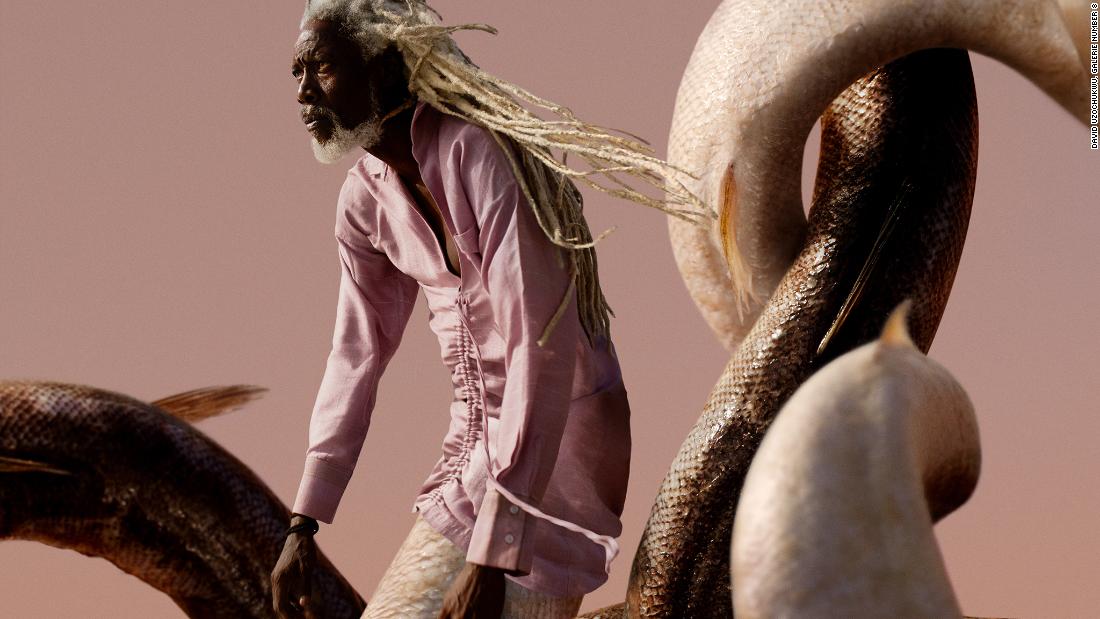 When you think of mermaids, it’s hard not to imagine the fishtail princess imagined by Hans Christian Andersen in her classic fairy tale: “her skin was as fair and delicate as a rose petal, and her eyes as blue as the deepest sea.”
After almost two centuries, the global representation of mercreatures is only just beginning to surpass the image first evoked in “The Little Mermaid”; this year, Disney is set to release a live-action reimagining of the story with black actress Halle Bailey in the lead role of Ariel.
But mermaids have always been an important part of African folklore. South African “Watermeids” depicted in Khoisan cave paintings (some believed to date back to 28,000 years) to the “Mami Wata” water spirit recognized in oral tradition across the continent and the African Diaspora in the Americas, the Black Mermaids predate Ariel well.

The 23-year-old autodidact’s work deals with desire and belonging, black and queer identity and magic.

His commercial photography includes collaborations with musicians FKA twigs and Pharrellfashion designer Iris VanHerpenand the WWF, and he’s received commissions from Dior and Hermès – but it’s his mythical and fantastical images that capture the imagination.

Ụzọchukwu uses his images to create space for black and brown people to see themselves in magic and myth. Pictured: “Floating”, 2019. Credit: David Uzochukwu, Gallery Number 8

In November 2021, Ụzọchukwu showed at Photo Vogue festival In Milan. For the festival, he presented footage from an ongoing series he started compiling in 2016 called “Mare Monstrum”.

The series is Ụzọchukwu’s first intentional work away from single imagery, and is influenced by stories of fantastical creatures from the African continent and the Diaspora, as well as the traditions of fairy tales and myths from around the world. Europe.

“In this mythological approach, I find so much truth, and sometimes it’s such a satisfying approach to political issues that concern me,” Ụzọchukwu said. “I’m slowly discovering how I can weaponize my art for a cause.”

Ụzọchukwu shot some of the footage for the series on location in a coastal town in Senegal, a place from which, he says, people leave to make the journey to the Canary Islands and to Europe – often never to be seen again. be reviewed.

“The series deals with the modern context of refugees. What I found interesting were these water metaphors used in the press: ‘waves of refugees’. There was this idea of ​​being ‘inundated’ by a sort of natural force,” he explained. As a European citizen, he realized that “this human catastrophe is part of our responsibility and this sense of responsibility pushed me to pursue these themes”.

Through his work, he hopes to dismantle some of the violence suffered by refugees from the African continent as they make the dangerous crossing to seek refuge on European shores – and draw a parallel with the transatlantic slave trade.

“Historically, there are interesting connections between water and darkness in the Middle Passage. [the forced voyage across the Atlantic Ocean to become slaves in the Americas]”, he added. “It’s really interesting to realize that you are part of a tradition.

From self-portrait to surreal fantasy

Ụzọchukwu found his passion for image making as a young teenager in Luxembourg. He first took up the craft as a hobby to impress a lover.

Growing up, photography became a way to understand and process one’s own identity. “It was important in the beginning for me to be able to create this space where I felt seen, to create this stage for myself to interpret different sides of myself,” said Ụzọchukwu.

He has moved away from self-portraiture in the traditional sense, but he maintains that every piece of his work could be considered a self-portrait.

“Over time I got more into post-production and that allowed me to start creating worlds around me, slipping into characters more and creating fantastic scenes and settings,” said the artist.

With a process that takes “weeks or months or even years”, Ụzọchukwu first sketches out his concepts and images, then turns to his camera, allowing experimentation and development as he shoots. . “That’s the first half of the process, getting that visual material,” he explained. “The second part is about letting it all come together in the digital sphere, merging, often, a separate subject and background, and potentially dozens of images. It’s like a digital collage – images layered and constructed on top of each other.”

Through distorted poses and this delicate layering of imagery, Ụzọchukwu’s figures become bizarre sculptural forms in barren dreamscapes, somewhere between surreal and hyper-real. He revels in the ambiguity of his work – its images both ethereal and ghastly, fascinating and disconcerting.

“It’s like licking honey off a thorn, having this bittersweet ambivalent approach to art, and I think especially when it comes to black bodies,” Ụzọchukwu said. “Having that ambivalence – for me, it’s very satisfying and important not to engage in the binary discourse of black horror and absolute monstrosity, or black joy and no space for angst.”

Ụzọchukwu’s work is currently featured in a traveling group exhibition, “Fire”, – curated by international photography awards group Prix Pictet – which just ended at the V&A in London in January and opened earlier this month at Luma Westbau in Zurich, Switzerland.

The multimedia artist also released his first short film “GÖTTERDÄMMERUNG” last year, and is currently finalizing his first film installation, titled “Civil Dusk”. The multi-channel installation will tell the story of Igbo men building a house in their family village in Nigeria.

“It’s a tradition that my father followed and became central to our family,” he said. “The film is a documentary-fiction hybrid, aiming to better understand this truly tangible connection to the original soil.”

The house is a central theme for most Ụzọchukwu images. Finding a place to belong in art is important to him as a person of African descent living in Europe, and therefore creating spaces for representation is crucial for him as an artist.

“It shouldn’t be a luxury to be able to see yourself in fantasy and imagine yourself in new contexts,” he said. “There’s this deeply human need to dream, and there’s something so comforting about having visuals and images and having something tangible that you can see yourself reflected in.”

‘Brave People Have Taken Over’: Remembering the Black Panthers Through Art | Art