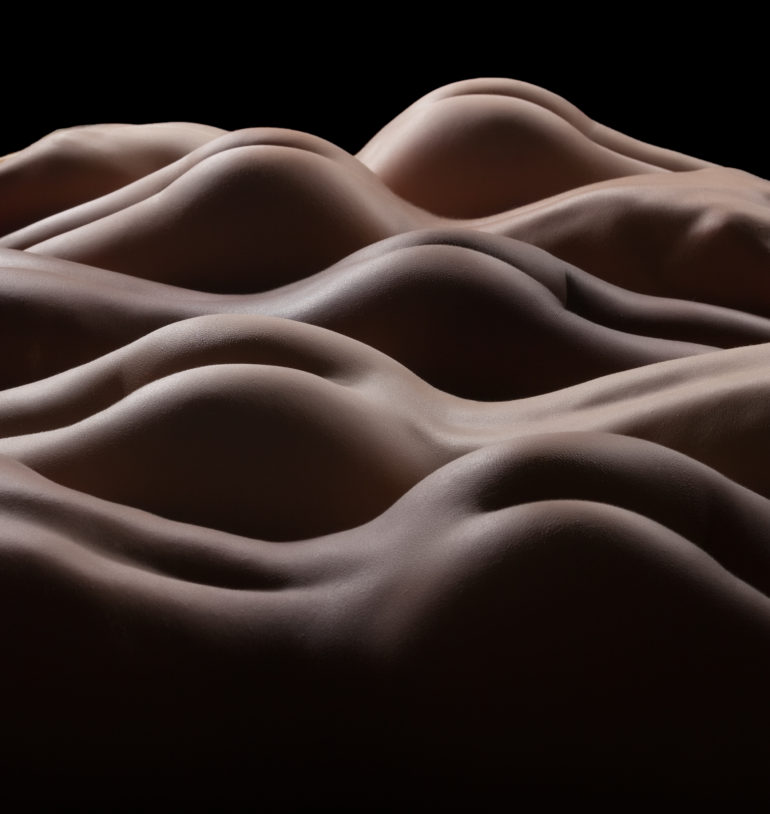 Craig Colvin photographs landscapes made of the human body (NSFW)

“The initial inspiration for Multiscapes was born photographing in the Mesquite Flat Sand Dunes in Death Valley,” photographer Craig Colvin tells me. That was over ten years ago, and he was attending a workshop with fine art landscape photographer John Paul Caponigro. He spent hours roaming the dunes, and as he navigated the landscape, camera in hand, a thought emerged.

Check out this article with minimal banner ads in our app for iOS, iPadand android. Get no banner ads for $24.99/year.

“The curves of the dunes reminded me of women’s hips, if they lay on their side,” Colvin says. “It was an epiphany that the curves of nature matched the curves of the body. This revelation has informed my photographic direction ever since. After returning home, the idea of Multiscapesa series of undulating “landscapes” created from light and the contours of the human body, were born and came to life in the studio.

We contacted the artist to tell us about the project.

“For lighting, I used a combination of AlienBee 800 and Einstein strobes. The Multiscapes were lit with two strobes with 4×1 gridded softboxes. They were placed behind the models and to the side, then pointed at the camera. For the Rainbow Multiscapes, I used three strobes, the two gridded softboxes behind the models, and a large six-foot parabolic umbrella with a diffusion cloth attached that was directly above the models.

Photographer: How and when did you start your career as a photographer? What attracted you to the medium?

Craig Colvin: My interest in photography began in my high school darkroom in Walnut Creek, California. I loved the darkroom look, but my photos were just snapshots. That changed in late 2007 while on a camping trip with a group of friends. I was taking pictures alongside a friend of mine.

When we came back and shared photos, I was shocked at how much better my friend’s photos were than mine given the same subject. This fueled the desire to learn more about photography so that they could take better photos. I tend to go a little overboard with new hobbies, and photography was no exception. For several years, I spent hours every day learning photography. Although this pace has slowed down, I still dedicate half an hour a day to teaching photography.

I love photography because it allows me to capture the images and stories in my mind and share them with others.

Photographer: Can you explain to me the process of making these Multiscapes?

Craig Colvin: A photographer friend had arranged for three models to come to his studio, and I also made time to shoot with them. To shoot multi-scape images, I had the two front models lay down on the floor and put a cushion on the back so that the rear model raised her up slightly. The lighting consisted of two strobes with 4×1 grid strip boxes positioned 45 degrees from the camera and placed behind the models pointing towards the camera. This created the edge light highlighting only the top edge of their body.

I loved the results and then wondered, “What next?” If three models were good, then five would be better, right? It’s exactly a month after my shoot with three models that I went back to the studio to shoot with five models. I used the same lighting setup and added an extra paddle and cushions for the models in the back.

To take these photos, I lie on the ground or very low to the ground and ask the models to adjust. With five models, it was very difficult for me to remember which model was which when looking through my crosshairs, and I found myself asking the wrong model to move a hand or raise a hip, etc. So I had the idea of ​​using a long stick that I found in the studio.

When I needed a model to adjust a part of his body, I would tap him with the stick and tell him which way to move: higher, lower, away from the camera, etc. It seems a bit strange in hindsight, but the models thought it was awesome, and we quickly went through a lot of different poses and looks. Over the next six months I had three more shots with two models and was still doing a few shots for the multi-scape series.

Photographer: How did you select the models for this project? Why did you entrust them in particular with the realization of your vision?

Craig Colvin: The main criteria I was looking for was variation in skin tone, as I thought it would add visual interest. If I had selected without it, there would still have been variations in skin tone, but it would have been more subtle and wouldn’t have had the same impact. The secondary criterion was models of similar size.

I tend to only work with professional models who know how to pose and know how to take direction. For this series, I used a total of nine different models, five of which I had worked with in the past, so I knew them and knew they would be up to snuff.

Photographer: Along the same lines, why do you think the models trusted your vision?

Craig Colvin: I think most models trust me because of my wallet. They say they admire my work and want to work with me accordingly. Trust is also built when shooting based on respect. I respect the work of models. Each photo is a collaboration between the photographer and the model, and I always talk to the model about the concept and incorporate their input into the shot.

Photographer: Can you tell us a bit about Rainbow Multiscapes?

Craig Colvin: After doing the multi-scape series, I wondered again, “What next?” and was stuck for a while on what the next step was going to be. I had worked with body painter Trina Merry in the past and came across a photo she had done of seven rainbow-colored hands, and that was the inspiration for the Rainbow Multiscapes

The shooting itself was planned for three months. Trina is a world famous body painter and tapped into her network of models to recruit six of the seven models. The seventh was a friend of mine who I had worked with on the original multi-scape series. I created a storyboard with 22 different shots I wanted to make and shared that with the models. I also built an 8’x8′ ramp that the models could lay on so I could get elevation from front to back.

On the day of the shoot, we got a call at 9:00 a.m., and one of the models was out. The concept really needed seven models, both to cover all the colors of the rainbow but also because odd numbers look better in compositions. I started calling every model I knew, and the six models that were there called every model they knew, and we finally found someone who could show up at noon.

I sorted all the models by height to determine their color but I didn’t know the height of the new model so I took a chance and decided it would be purple. It ended up being short and really should have been forward (orange or yellow) but made it work. If you look closely, you can notice the difference in some photos.

The models took turns painting themselves with the initial coat, and Trina, the body painter, then did the final pieces and touch-ups. Halfway through the process, Trina suggested using stencils and an airbrush to put patterns on each model to make it more visually interesting. She did a swatch, and we both agreed it was way better than the straight colors.

The problem was that it was a very time-consuming process, and she ended up finishing the bodypainting at 4:00 p.m., when we started taking pictures. It then took almost three hours to shoot my 22 storyboard ideas plus another five or six, so it was a very long day. I shot a behind the scenes video of this shoot, available here.

Photographer: what is your most striking memory of your creation? Multiscapes?

Craig Colvin: The day of filming Rainbow Multiscape the series was very memorable. After months of planning, seeing it unfold the way I had imagined was very rewarding. It reinforces the fact that my best shoots are always the ones that require the most effort and planning.

Photographer: You are also an educator. If so, what did you learn from your students that helped inform your approach to creating artwork?

Craig Colvin: Each person sees a shot differently. Watching how my students see a scene also makes me see it differently, and that continues in my next shoot. Looking at my students, I now tend to work a scene very differently than I might have done in the past.

I use a wide lens when I could have used a telephoto lens before, or vice versa. I change my point of view more, lying down or climbing high. I surround the model and I shoot from behind or from the side when I was only shooting from one angle. I am constantly surprised by how we each see something different when filming the same thing.

All photos by Craig Colvin. Used with permission. To learn more about Colvin, do not hesitate to visit his site. Follow us on Instagram at craigcolvinphotoon Twitter Craig Colvinand on 500px to CraigColvinPhotography.

Want your work featured? Here’s how!