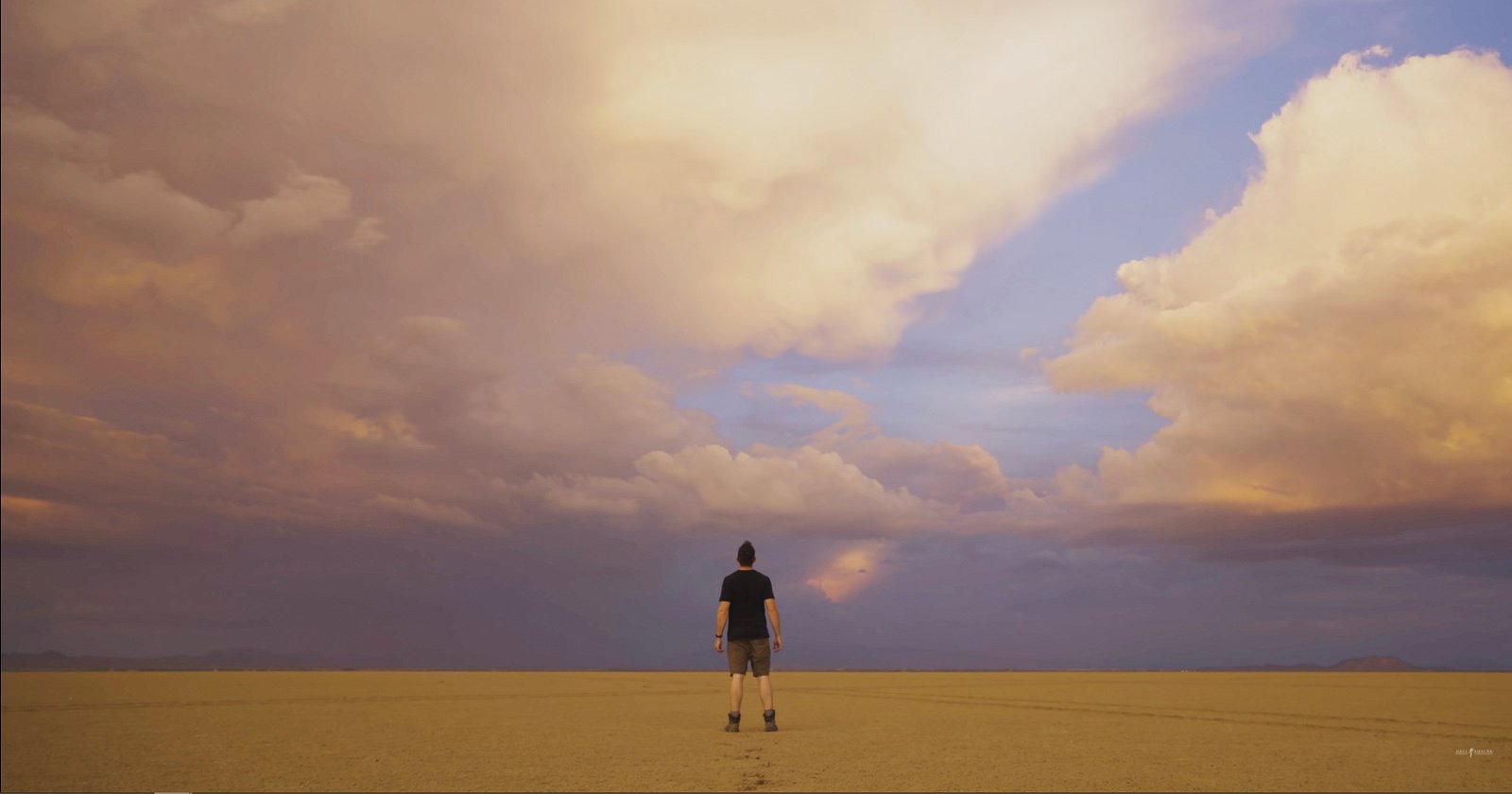 Chasing the Storms: Photographing a Monsoon and Dramatic Lightning

Shainblum, a landscape, timelapse, and aerial photographer based in San Francisco, California, is already accustomed to photographing the unpredictable and sometimes dangerous weather conditions that nature provides. It’s not something that he recommends for beginners to try out solo and has previously shared tips for those who want to try storm chasing.

This time, Shainblum begins by photographing a dry lake bed – also known as playa – on a sunny day, joined by his friend, photographer and fellow storm chaser, Nick page. The dry weather conditions created a pattern on the ground, made up of crack formations. In anticipation of a storm that was to come later, Shainblum captures a few test shots and makes sure to take multiple images of the scene to stack later.

He says it’s good practice to take a few extra frames with different focus points – to avoid regretting not having those extra frames during post-processing – in the scene, especially if the foreground has so much character. This also includes sharpness from all corners.

When the sun begins to set and the light shines on the clouds, it can become difficult to decide what to photograph and how to photograph it, as there are so many options. The key is to decide and stick to that decision. One of those options is a panorama – as seen above – which in Shainblum’s case provides a view of around 180 degrees and took 18 wide-angle photos to create. Shainblum also shot two rows of horizontal shots, which further adds a sense of vastness to the final shot.

Storm clouds offer photographers a diverse range of colors and textures to play with, Shainblum explains. To get the most out of the given scene, he takes timelapses and stills, not forgetting to just enjoy and witness the beautiful view, especially as the sunset brings dramatic sky formations. 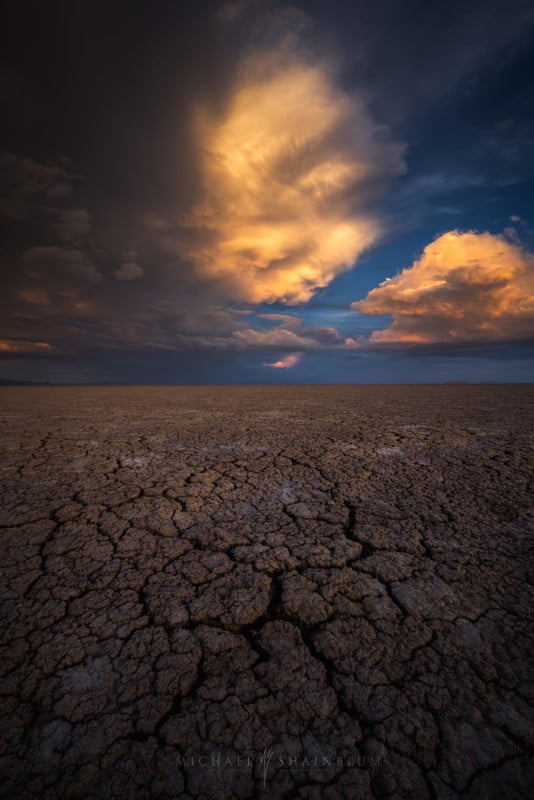 As the sun sets and the thunderstorm advances, Shainblum made sure his camera was set for a timelapse so that he didn’t miss an important shot when the lightning started. He says it’s important to watch the storm and the direction it’s heading to ensure safety, which is why Shainblum and Page have previously recommended photographers join a storm photography community or find someone. who has experience reading storms. 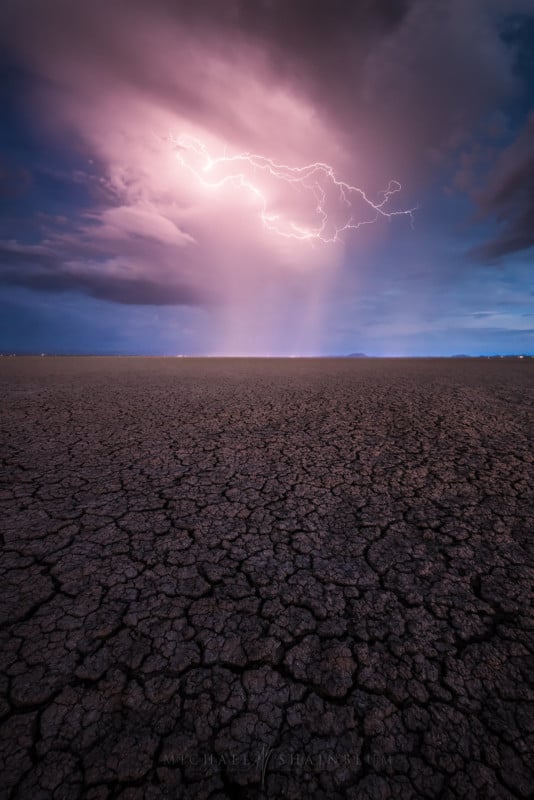 The night ends with a heavy rain, which prompts them to find another point of view. However, it is worth the wait and the extra effort, as they are able to capture dramatic lightning bolts. 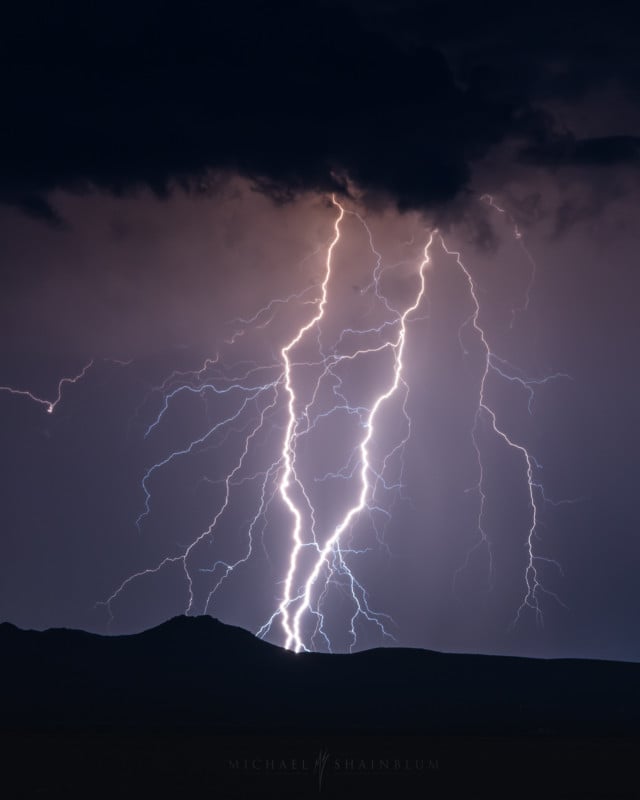 Image credits: All images by Michael Shainblum and used with permission.