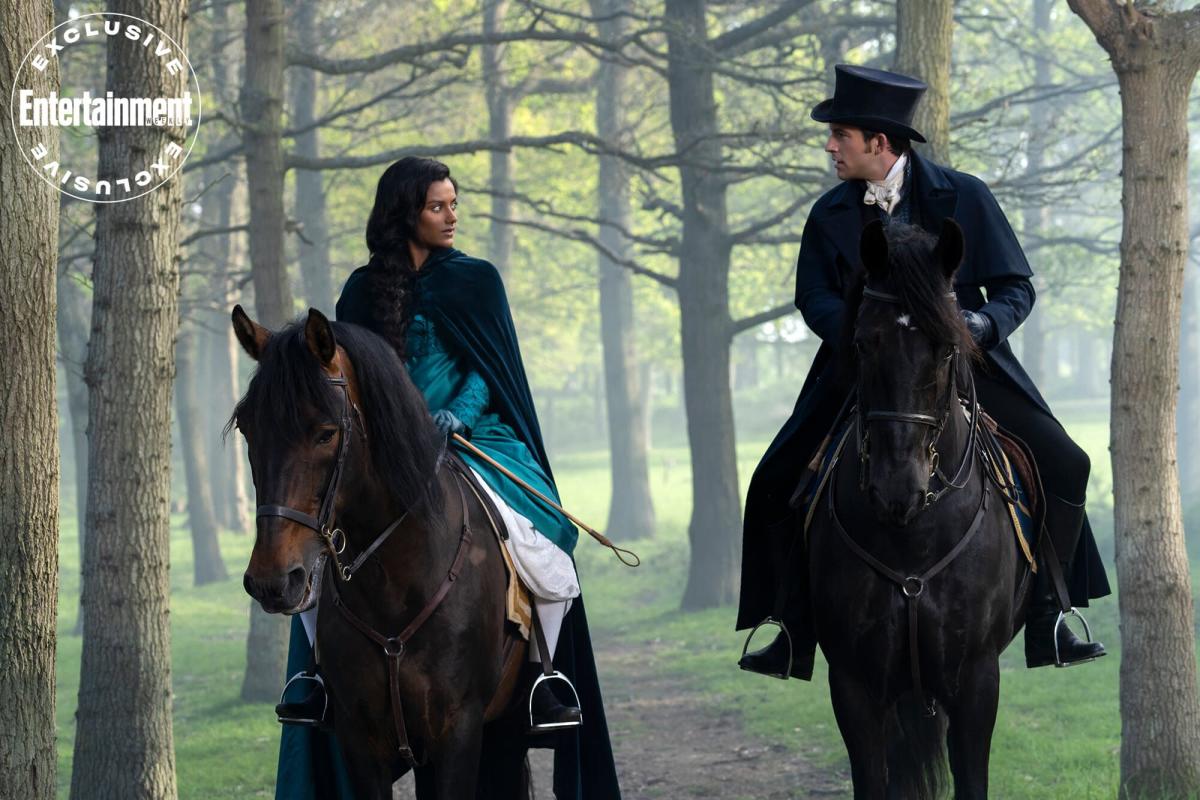 Based on the second Bridgerton novel by Julia Quinn, The viscount who loved meseason 2 of Bridgerton embraces the beloved romantic trope of “enemies of lovers.”

For Kate Sharma (Simone Ashley) and Anthony Bridgerton (Jonathan Bailey), it’s detestable at first glance. While Simon (Regé-Jean Page) was a debauched duke educating Daphne Bridgerton (Phoebe Dyvenor) in the mores of the world, Kate and Anthony are equal, courteous and closed.

“They’re out of their own lives and incredibly alone,” Bailey teases. “They are two magnets, and they repel and attract each other. Their heads are both above the parapet of their families, and they do everything to help others, but in doing so they control everyone.”

But control is an illusion, and Kate is there to knock Anthony off his patriarchal pedestal, even as he tries to pursue his sister, Edwina (Charithra Chandran), out of a mistaken belief that she will make an ideal wife for a man. who wants a marriage without love. “We meet Anthony at a time when we can understand his decision to find a suitable wife who can serve the purpose of being Viscountess,” Bailey said. “As opposed to someone he falls in love with or has the slightest sense of emotion.”

Still, it won’t be as simple as falling in love with the wrong sister. Anthony and Edwina also forge a real connection. “Edwina and Anthony have a real, genuine relationship,” Chandran says. “They connect, and you can clearly see that in many ways they belong. But there are other competing forces.”

“The Bridgertons are quite special in the ton, so when he becomes the eligible bachelor, it would only be in his pursuit of perfection that he would match up with [the “It” girl]”, says Bailey. “It’s the easiest way for him to decide how he’s going to find his match. Whoever it was, he would have set his sights on him. But there’s a real head and heart between the two [women]and you can understand why he’s attracted to both – and they’re both attracted to him in turn.”

“Love triangles throughout time have always been intensely attractive,” he adds. “The triangles are sharp and edgy; they can cause a lot of damage, but they’re also fun to look at. Along with Anthony, Edwina and Kate, they epitomize his early approaches to love in the series.”

Chandran sees their relationship as one based on a mutual understanding of their responsibilities and place in life. “Anthony and Edwina were raised to fulfill a role,” she adds. “In his case, it’s to be [the perfect wife]. In his case, it will be the viscount. And it’s something that they connect with and understand themselves in a way that a lot of other people couldn’t. Edwina truly falls in love with the viscount. It’s a naive love, but his feelings are very sincere.”

A big part of Season 2’s journey for these three characters will be allowing them to realize that there is a different path than the pre-established course they themselves have determined (or dictated by society). “There are people like Edwina all over the world, raised to be the perfect wife and mother,” Chandran says. “I hope the show and this character show them that they can be so much more than that.”

“It’s gonna take something completely other to bring Anthony out of his hyper-masculine fog,” adds Bailey. It’s Kate, whose sharp tongue, penchant for riding astride and ability to see through her sister’s suitors intrigue Anthony. literally outside of society. She has a lot to do, and it intrigues her. He’s probably never seen a woman astride before. She comes in and blows the London debutantes out of the water.”

For Kate and Anthony, their reluctant connection is largely based on their devotion to their families and their incisive refusal to allow themselves to fall in love. “There’s something indefinable and very human about them that brings them together,” adds Bailey.

An initial mutual disgust stems from their own inability to process their feelings. “They’re obligated to each other in a way,” Bailey explains. “They’re not wired in the right way. They’ve been through things in their lives, which means the things they feel don’t allow for curiosity but go straight to hate and aggression.”

It will take a lot of hard work – and head-to-head – before we can see their similarities. Wanting to make sure her sister secures the best future, Kate also refuses to follow her own heart and avoid anything that might harm her. She is still overwhelmed with grief over losing her father, so her main tactic is to keep everyone but her sister at bay. “That transition from enemies to lovers – they both learn to let go of your defenses and dig a little deeper and put you in a vulnerable position,” Ashley explains. “They have so many duties and responsibilities to their families, and their whole transition is this beauty of them finding these secret pockets where they can let go and just be themselves.”

If Season 1 was about raising a Miss Daphne Bridgerton, Season 2 is about bringing Anthony Bridgerton to his knees. And no one is better placed to do so than Kate Sharma. “What does it take for Anthony to really break?” Bailey said, noting Anthony’s initial commitment to refusing to allow himself to be vulnerable. “He has to break to rebuild himself. Kate calls him on absolutely everything and has a very good idea of ​​what men should and shouldn’t be. Anthony becomes a figurehead for the values ​​and ideals of this society and this sense of privilege, but thanks to Kate, you see exactly what behavior is toxic.”

While Kate is also engrossed in hiding her own tender heart, she has something more of an open wound that allows her to understand and empathize with Anthony against her own better judgment. She is a literal repudiation of the misconstructed toxic masculinity he has allowed to guide his life choices. “There’s strength in his vulnerability,” Ashley says. “The strength to grow, and that’s tied to his love story – learning to love, to let in, to give love.”

When it comes to Bridgertonhowever, this is little for the course.

A version of this story appears in the March issue of Weekly entertainmenton newsstands February 18. Don’t forget to subscribe for more interviews and exclusive photos, only in EW.

The baroness who photographed 1950s Iran