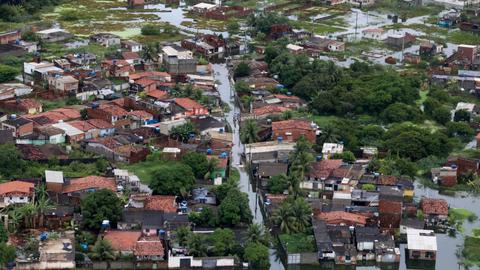 President Jair Bolsonaro is making an air trip to the disaster area after heavy rains ravaged several urban neighborhoods in the northeast of the country, leaving at least 91 people dead and dozens missing.

President Jair Bolsonaro sent his condolences to the families of 91 people who died in torrential rains in northeast Brazil, as rescuers continued a grim search for victims.

In issuing an updated toll, authorities said 26 people were still missing in the region around the city of Recife, where days of downpours triggered floods and landslides that washed away virtually everything in their path .

Bolsonaro posted a video on Twitter it showed him flying in a helicopter over a disaster area where brown floodwaters still inundated large areas and gash marks of mud scarred hills where houses once stood.

“I tried to land, but the recommendation from the pilots was that, given the instability of the ground, we could have an accident. So we decided not to do it,” said the president of extreme right at a press conference.

He recalled a series of devastating floods in Brazil that have killed hundreds of people in recent months and which experts say are made worse by the climate crisis.

“We send our condolences to the families. Our top priority is to comfort the families and provide assistance to the people,” he said.

The force of the landslides destroyed homes in neighborhoods such as Jardim Monteverde, a poor community just outside Recife.

Rescuers found more than 20 bodies buried in the mud that tore through the neighborhood on Saturday and said they expected to find more.

“I’ve lived here for 40 years. They were like my family. I’ve seen a lot of them grow,” Da Silva told AFP news agency, crying behind his sunglasses.

Dozens of rescue workers are still digging in the ocean of mud, while cleaning teams in yellow uniforms clear the streets, slowly picking their way through the rubble, an AFP photographer noted.

In just a few hours on Friday and Saturday, parts of Pernambuco received 70% of the rain they usually receive for the whole month of May.

“We have never seen so much rain fall in such a short time,” said Mario Guadalupe, a 60-year-old retiree.

“I saw the landslide happen. The first part of the hill gave way, then it was just a tsunami of mud. It almost washed away my house.”

Such tragedies are becoming a familiar scenario in Brazil.

They tend to hit hardest in poor neighborhoods, especially hillside favelas or slums.

In February, 233 people were killed in floods and landslides in the city of Petropolis, in the southeastern state of Rio de Janeiro.

In January, torrential rains killed at least 28 people in southeastern Brazil, mainly in the state of Sao Paulo.

And in December, storms killed 24 people in Bahia state, in the northeast of the country.

On that occasion, Bolsonaro –– who trails leftist ex-President Luiz Inacio Lula da Silva in polls ahead of the October election –– came under fire for failing to cut short his year-end beach vacation to visit the disaster area.

“Unfortunately these tragedies do happen, a country the size of a continent has its share of problems,” Bolsonaro said on Monday.

On the ground, many residents were angry.

“Many people have lost everything –– even their lives. We are crying out for help. We need food, homes, clothes. So don’t just come here to campaign. We need action,” said Jardim Monteverde resident Jailson Gomes. Souza, 34 years old.

Bolsonaro’s government announced that it had allocated $210 million in emergency and reconstruction funds for areas affected by the latest storms.

Meteorologists say the heavy rains hitting northeast Brazil are the product of a typical seasonal phenomenon called “eastern waves” – areas of atmospheric disturbance that move from Africa to the northeast coastal region from Brazil.

“We urge the population to respect the alerts issued by the authorities” and to evacuate if necessary, said Regional Development Minister Daniel Ferreira.

READ MORE:
Dozens dead in landslides and floods in Brazil