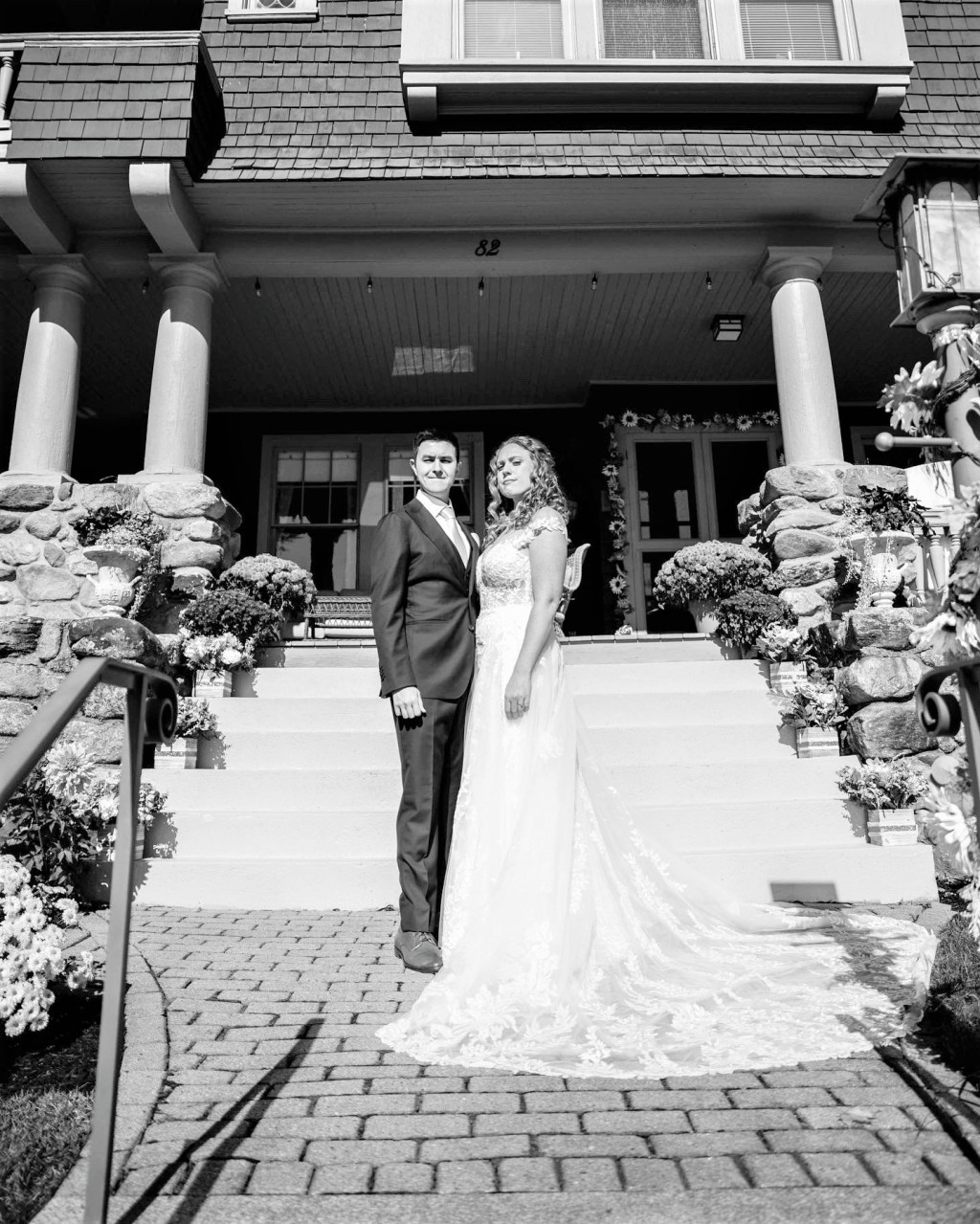 ASHBURNHAM — Exactly 115 years after wedding photos were taken on the front steps of a historic home in the city, a bride and groom have reconstructed the original wedding portraits down to their stoic facial expressions.

Meghan Jane Barr married Evan Hidetoshi Oto on October 15 at the New Dawn Community Center with a reception shortly after at 82 Main St. the home of her parents, Charles and Susan Barr. The house was built 115 years ago specifically for the wedding reception of Blanche Gay Hardy of Ashburnham with Dr. Moritz Schlick of Berlin, Germany on October 10, 1907, an occasion covered by the Fitchburg Daily Sentinel.

The modern young couple, from Elmsford, New York, decided to pose with each other and their wedding party, just like the original couple outside the bride’s family home.

“They nailed the unsmiling poses of the era,” Charles Barr said of the photographs captured by Central Mass-based photographer Hannah Fisher.

Barr grew up in Lunenburg and lived in many places with his wife and their six children, including three decades in Connecticut, before moving to Ashburnham two years ago. When he discovered that a wedding reception had taken place in the exact same place at the turn of the 20th century between the Cushing Academy graduate and the famous German professor whom she had met on a vacation studies in Germany, they knew they had to give the couple a nod through the reenactments.

Meghan now goes through Oto except for her second year students, who still call her Miss Barr. Her father shared that her sister-in-law joked, “You’re the only person I know who can shorten your last name to four letters.”

When asked what it meant to the couple to celebrate their union at the family estate, the bride replied, “Family is everything to us.”

“This house has brought us together again under one roof where we can spend time with each other as a growing family,” she said. “We are so grateful for this property and the memories we have created in just a few short years and felt we could express our gratitude by honoring its history with another celebration of love and marking the beginning of my life and Evan’s together in the same way the couple and family did over 100 years before. We felt that we fulfilled the purpose of the house, as a place to gather, celebrate and express our love surrounded by those who matter most to us.

The bride and her husband stayed in the house which was previously a guesthouse for the wedding festivities with her five siblings and their own children and extended family. Three of her siblings live in the Boston area, one lives near her in Westchester County, and one lives in California.

“Home is the natural gathering place for children and grandchildren for holidays and birthdays all year round,” Barr said. “Because Meghan chose it as a location in part due to the pandemic backlog filling many commercial sites, it became both a practical and historically logical choice. Photos of the original couple and their wedding party hang in the house, which inspired a recreation of these photos on the same steps as 115 years ago.

He said the location of their beloved home “is literally in the center of the community,” nestled between two churches and near the historical society, two blocks from downtown.

“Several previous owners had large families and we often hear from neighbors and others they played or kept in the house years ago, bringing a shared sense of history to the community,” Barr said. .

They hosted 140 guests at the reception under a tent on the house’s lawn, in the same location where the Hardy-Schlick celebration had been held over a century before.

“The wedding was perfect, according to the bride,” Barr said. “There was a beautiful fall afternoon ceremony next door at the New Dawn Community Center, a former church, and then a reception in a tent in the front yard with a transparent roof and sides.”

A Westminster company, McNally’s Catering, hosted the dinner reception, an after-party at the Tavern on Central for 100 people and a Sunday breakfast in the tent for 75 people. was an absolute dream.

“Between the fall foliage, blue skies and small town New England vibe, we felt the warmth of being home on one of the most memorable days of our lives. “, she shared. “Our guests commented on how cozy and warm the afternoon was and how quaint the whole property was dotted with vibrant leaves.”

Barr said they were delighted to host the celebration and continue the tradition of the house wedding venues.

In a pinch? Here are the four loans you can get the fastest