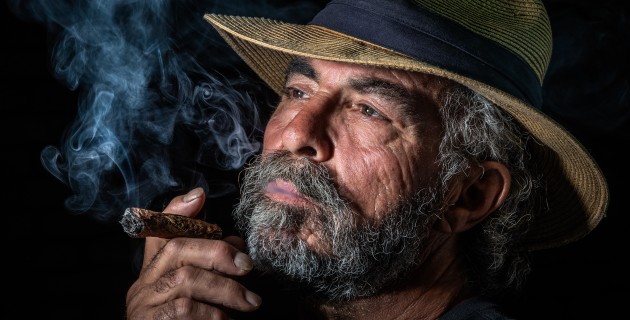 APS Behind the Lens: The Cuban

My passion for photographing people started in high school. I enjoyed capturing my friends at school activities or at parties. I soon realized that time flies too fast and wanted to save my family and friends for future posterity.

The Cuban is a portrait of my brother-in-law John Santillo. He is a hardworking and independent trucker with a great character and a very interesting face. He was initially hesitant to sit for me because he didn’t like having his picture taken. This meant I had to make sure he understood the concept and style of photography I had in mind and on my second request he agreed to participate.

I explained that the cigar would be used as an accessory with hats. In preparation, I had asked her not to shave before the shoot to get the scruffy look I wanted. Then he told me he was trying to quit smoking! A week later he said he would do the shoot and he was comfortable with the cigar and fully understood what I was trying to achieve.

While filming, he was blown away by the images I showed him on the back of the camera. A few times he said, “Is it really me? The lighting setup was kept simple with two 250W flashes on brackets; the main flash was fitted with a wide, flat diffuser and placed to his left and 45 degrees above his face about 1.5 meters away.

The second flash was ten feet to the right and slightly back to give some fill light to the hat’s back and shoulders. There was no lighting in the background because I wanted the pale smoke to stand out.

My golden rules with portrait photography are to always carefully plan the shot together in advance and to involve the subject(s) in decisions about clothing, style and use of props, and always try to provide continuous feedback and encouragement while shooting.

Surprisingly, the whole shoot was over in 45 minutes. To date, I have had 37 acceptances and nine awards, including two FIAP gold medals from this shoot. But the biggest honor for me was to see how delighted and proud John was with the images we made. ❂

How to get a small loan to finance your business expenses