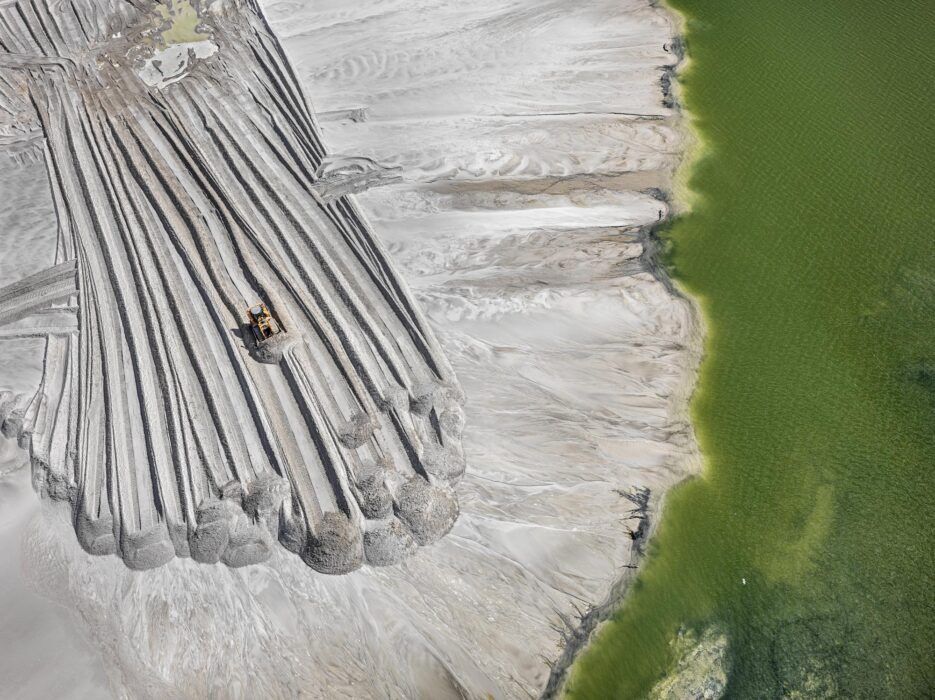 The World Photography Organization announced the first of the Sony World Photography Awards 2022. Renowned Canadian photographer Edward Burtynsky will receive the award for Outstanding Contribution to Photography. Burtynsky is known for his large-scale aerial images of the industrial landscape.

More than a dozen of his large-scale photographs will be on display as part of the Sony World Photography Awards 2022 exhibition at Somerset House, London from April 15 to May 2, 2022. The selection, made by the artist, highlights the main works and themes during his 40-year career. These include epic scenes from Anthropocene (2018).

To mark the award, we are broadcasting an interview with Professional Photography magazine which was published in 2018, to coincide with the launch of Anthropocene…

Interview with Edward Burtynsky in 2018

Edward Burtynsky photographs parts of the world that we rarely see, but should know about. Among them are pristine tropical forests being decimated, vast landscapes poisoned by industrial pollution, huge surface mines healing the Earth and piles of mountain waste. His message is clear: if we do not change our behavior, the damage will be irreversible, with potentially disastrous consequences.

Burtynsky, 63, born and raised in Ontario, Canada, has chronicled the human impact on Earth for 35 years. His images, often taken from a high or aerial perspective, sometimes resemble imaginative abstract paintings, but each has an important story to tell.

His desire to show the magnitude of what we do to the natural world was inspired by his early experiences of Canada’s natural beauty. â€œI fell in love with photography when I was young while going

outside and being in nature with a camera, â€he says. â€œCanada has phenomenal wilderness and I was able to discover these natural riches. I got to feel what nature wanted for the surface of the planet, in relation to how we rearrange it. ”

After graduating in Photography and Media Studies in 1982, he began working in color with large format cameras, photographing pristine landscapes. But he soon realized that there was another way to approach the landscape: to show how it has been reshaped by human activity.

Burtynsky began by photographing surface mines, then in 1982 began a project on railroad trenches – studies of railroad tracks that crisscrossed the rocky landscapes of British Columbia. This work marks a turning point, arouses the interest of dealers, collectors and museums and effectively launches his career.

Establishing as a documentary fine art photographer is never easy and by the early 1980s Canada was in the throes of an economic recession. His early projects were largely funded by grants, but it was not a reliable source of long-term funding. Thus, in 1983, Burtynsky decided to create his own company, Toronto Image Works, a high-end photographic laboratory. The income he generated funded his projects, while the day-to-day work of his company gave him a valuable in-depth knowledge of processing and printing, which allowed him to get the most out of his images.

The financial security offered by the company has allowed Burtynsky to develop a formidable body of work. He has since documented a wide range of topics including quarries, salt marshes, shipbreaking in Bangladesh and industry in China, as well as longer term projects such as â€œOilâ€ (2009) and â€œWaterâ€. â€(2013).

Burtynsky’s approach is to first research his subject and then explore it photographically through the most spectacular examples he can find. If he photographed quarries, he would go into “the mother of all careers” and if he explored industrial pollution, he would go to the most polluted places on the planet.

Some commentators have questioned his approach. â€œA lot of people say that I take these catastrophic and disastrous landscapes and aestheticize them,â€ he says. â€œI can’t see myself doing this. I see myself using visual language to convey back these places in a way that engages us. For me, it’s about understanding the scale of what we’re doing there and using the medium to show landscapes that are usually forgotten, and certainly places we would never go.

Today, although Burtynsky still runs his Toronto Image Works business, his projects are funded entirely through the sale of prints to dealers, collectors, and museums, as well as lectures and books. He has received major awards including the Officer of the Order of Canada (2006), Photo London’s Master of Photography (2018) and eight honorary doctorates, and his work is in the collections of 60 major museums. of the whole world.

His latest work, “Anthropocene”, is in many ways the culmination of what he has done throughout his career. This is an ambitious multimedia project, which will be published in the form of a book, a feature documentary and two complementary museum exhibitions at the Art Gallery of Ontario and the National Gallery of Canada. They were all created in collaboration with cinematographer Nicholas de Pencier and director and producer Jennifer Baichwal. The Flowers Gallery in London is also currently exhibiting new works from the â€œAnthropoceneâ€ series.

The project is named after what an international group of scientists proposes as the new geological epoch in which we now live; one that was caused entirely by the human impact on Earth. It examines mining, deforestation, agriculture, and urbanization and how they shape the Earth and the species we share it with.

As Burtynsky notes in the introduction to his book, even in his own lifetime, the human population has doubled to 7.2 billion, and we now remove nearly 60 billion tonnes of material from the planet each year. . â€œIt is clear,â€ he says, â€œthat the expanding industrial metabolism is a major driver of global environmental change. “

The project lasted four and a half years and involved Burtynsky and filmmakers who traveled to every continent in the world except Antarctica. They visited 20 countries and photographed and filmed in 46 different locations, many of which are extremely difficult to access.

One example is the remote town of Norilsk in Siberia, above the Arctic Circle and one of the most polluted cities in the world. It is a city closed to foreigners; even Russians need special permission to visit. It took 18 months to arrange to photograph there.

â€œWhen we got there, we were detained and our fingerprints were taken and they accused us of lying about our visa application,â€ Burtynsky recalls. â€œAnother time, when we were working in the Siberian town of Berezniki, I think we were detained five times in two weeks. “

He also photographed the Bagger 291 and 293, two of the world’s largest land-based machines by weight, in an open-pit coal mine in Germany. â€œWe were standing at the foot of a machine that was 300 feet high and 1,000 feet long,â€ he says. â€œWhen he moved, the earth shook. It was like something from another planet.

â€œAnthropoceneâ€ involved Burtynsky documenting new and familiar subjects in new ways using technological advances. He took to underwater photography for the first time, where he took several images of the pristine coral reefs off the Indonesian island of Komodo and stitched them together to form huge, detailed prints up to 24 feet wide. He also returned to documenting the topics he had covered earlier in his career.

â€œI photographed quarries for the first time in 1993, but I had not returned there until my return a few years ago,â€ he continues. â€œThis time, I opted for a whole new set of tools. We were shooting and filming in virtual reality with a drone. It was also my first time using a 100 megapixel Hasselblad, which was almost like having a 5×7 camera up there.

â€œI was able to lock the drone in position, compose via a video screen and get crisp, crisp images on the ground. In 1993, it was just me and my fixer. This time I returned with a crew of eight. It allowed me to understand how, over the next 25 years, my world had changed.

On the set itself, being in charge of a group of people means Burtynsky has to do a lot more than just take pictures, but focusing on the footage is crucial. â€œIn all this turmoil, I had to stay focused on the subject and not let all of this get me out of my way,â€ he says. â€œI had to be a mental lone wolf; I had to understand, ‘What’s the picture here?’ Doing this was a discipline that I acquired by working independently for my early work. It meant I could still muffle all that noise.

Is he optimistic that we can avoid an ecological disaster? â€œIt’s hard to be encouraged these days because it seems like we’re not moving fast enough to fix the problem,â€ Burtynsky says. â€œWe are up against a handful of powerful individuals running companies who have a different idea of â€‹â€‹how they want the world to play out and they have the resources to really shape that direction. I am quite disappointed with what the baby boomers have done. It seemed like getting rich was the main goal, and to hell with the world.

â€œHowever, many businesses and many politicians at the local level are pushing for greener policies. I think the next generation to come knows the deal and I hope they have the power soon and do the right thing with that power. We need a proactive strategy. It’s the technology that got us into this mess and I think it will take technology to get us out of this mess.

The T-List: Five Things We Recommend This Week