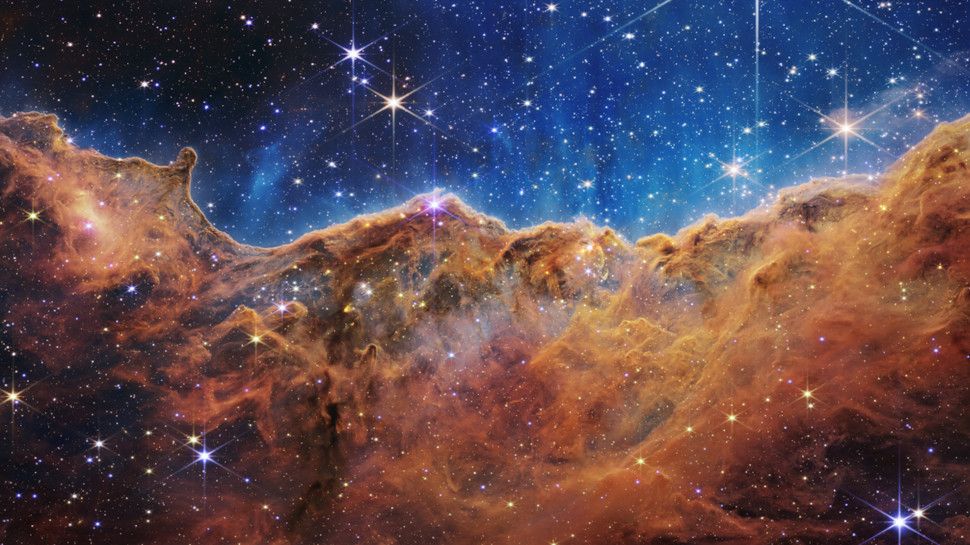 Across the Universe: How Space Photography Will Change Our World

Ever since Neil Armstrong took his “small human step”, the visual identity of space exploration has been driven by data.

Indeed, space accessibility has always revolved around the importance and distribution of space photography to the masses, inspiring future engineers and scientists around the world.

Techniques evolved from pointing a camera from a space shuttle window to encompassing mirrors and telescopes, capturing subjects at enormous distances. But to share these achievements, space agencies have had to solve multiple data and photography challenges.

From the original Apollo 17 Blue marble picture (opens in a new tab) (1972) to the first images produced from the Carina Nebula by the James Webb Space Telescope (2022), data and data storage have played a crucial role in facilitating these incredible discoveries and explorations.

More waves than the Pacific

Outer space is volatile and beautiful. It’s tough and its weather unpredictable, so to capture its subject matter, you need robust R&D, variable techniques, and data solutions.

Vast swathes of the universe – like our own galaxy, the Milky Way – are hidden by cosmic dust, which is impenetrable to visible light. But the discovery that radio waves pass through cosmic dust led to their current use in space photography.

UV photography uses ultraviolet radiation to create two-dimensional images of extragalactic stars and planets. And infrared (IR) cameras focus on electrons emitting radiation to capture photos beyond the visible light spectrum. In contrast, radio imaging constructs images by sending radio waves out into space that bounce off objects and return to satellite receivers. This data is compiled and creates pixel images of data to create a mosaic.

The data required to construct a single photograph with any of these techniques is impressive. For example, this image of the center of the Milky Way was captured by the MeerKAT radio telescope in South Africa. The panorama itself is a composition of 20 separate radio wave observations, which required three years of processing and 70 terabytes (TB) of radio wave imagery for this single image.

70TB is a lot of data for a single image. To put that into perspective, 1TB is enough to store around 20 feature films.

Consuming this volume of data is not an irregularity. Current running missions generate these levels steadily, sometimes reaching up to 100 TB per day. In addition, this data must be stored locally during space missions before being transmitted back to Earth for processing.

Data integrity and how to store it has become a unique challenge in outer space. Materials must withstand launch, orbit and space radiation. The reliability of these materials is mission critical. These missions capture isolated incidents that humanity often only has one chance to see and demonstrate how critical it is that this data comes back to Earth in a usable form.

Trying to transfer this data to a centralized source for processing will potentially cause networks to collapse as single streams of data turn into a flood. This is where NAND flash memory comes in – a durable, non-volatile and cost-effective solution. NAND flash already powers billions of devices and applications, and stores user data and operating systems here on Earth, maximizing bandwidth utilization and enabling real-time analysis.

Satellites must withstand the forces of a rocket launch, leaving Earth’s atmosphere, the extreme temperatures of space and galactic cosmic rays. Once the collected data is safely stored, the various space missions wait to transmit the data back to Earth via radio waves. Mission Control must monitor transmission volume and rate to ensure data integrity.

It’s a balancing act – because the data must not exceed the storage capacity of the satellite; while avoiding losses during the transmission phase.

To infinity and beyond…

Beyond the benefits to science and business in terms of data storage, space photography is crucial for communicating space missions. The power of imagery is that it is an inclusive medium, unhampered by technical jargon, complicated math or even translation; it is a completely universal form.

Space photography shows us what is beyond our world. A story punctuated by the tireless work of technicians, engineers and scientists from around the world. While demonstrating technical advancements and prowess, space photography simultaneously inspires the next generation to come.

These images can be the source of many scientific careers, whether as an astrophysicist, ecologist or mathematician. They may not land in space, but these people still land among scientific stars.