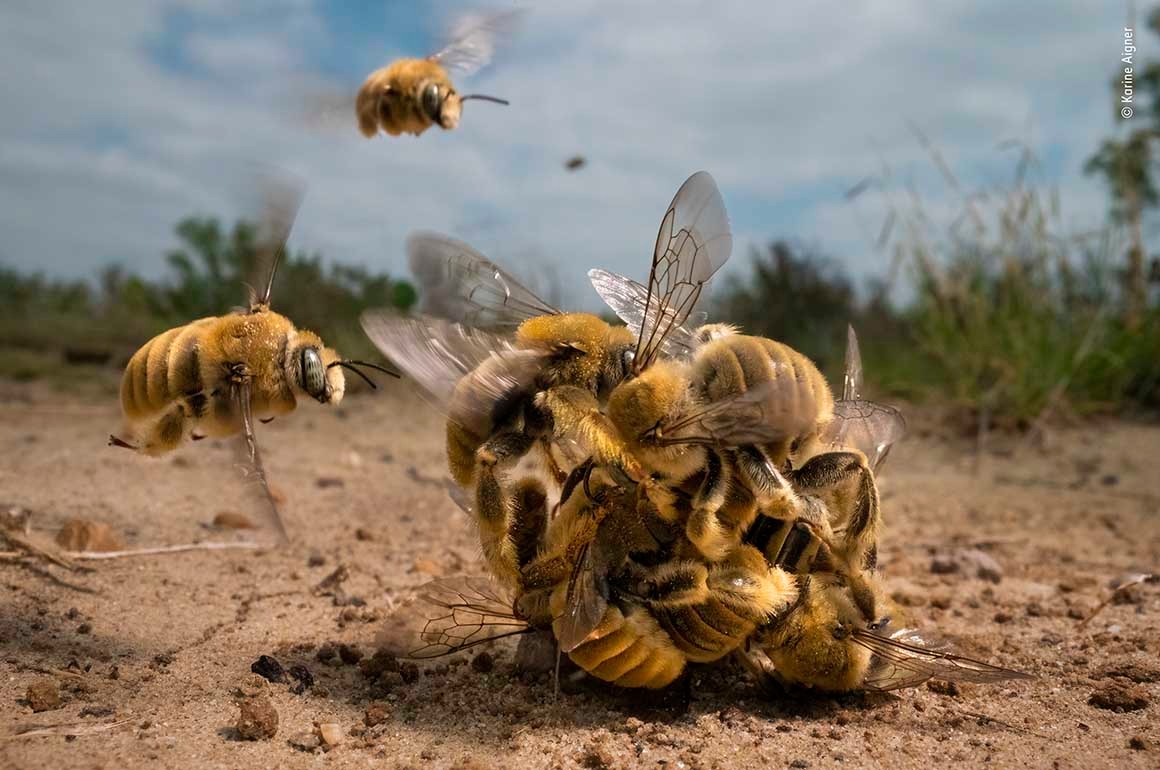 2022 Wildlife Photographer of the Year Winners

London’s Natural History Museum 58th Wildlife Photographer of the Year Winners were announced, with American photographer Karine Aigne winning first prize for an image of a ball of cactus bees.

the image of Aigne, The big buzz, shows ordinarily solitary cactus bees in a “mating ball,” an event that occurs once a year in the southern US desert. The male bees explore the ground in search of a mate, and when a female emerges from a burrow in the ground, the males jostle and pile on top of her to ensure their chance to father the next generation.

“Wings roar, males arrive at the ball of buzzing bees rolling right into the picture,” said Rosamund “Roz” Kidman Cox, chair of the Wildlife Photographer of the Year judging panel. “The sense of movement and intensity is shown at bee-level magnification and transforms what are small cactus bees into great competitors for a single female.”

Aigne hadn’t expected to find the bees. She came across the fiercely competitive mating ritual while walking around a Texas ranch, noticing “the ground suddenly became pockmarked with hundreds of volcano-like turrets” and thought to herself “what kind of ants are they?”. Upon closer inspection, she discovered that it was the cactus bees.

“I had never seen them before,” she explains, although she had visited the ranch for many years, “and I had no idea what I was looking at at first.”

“The tiny world of animals is a world that we often overlook and so often take for granted, and ironically it is the basis of the structure of all life,” she said. “What I love most about this image is that it shows most people something they’ve never seen before – it enlarges a small world and puts the life of a small bee on the stage of the word.”

Here’s a little more information about bees, courtesy of the Natural History Museum:

The typical image of bees is usually that of a large colony buzzing around a honeycomb, but the vast majority of the 16,000 known species of bees are actually solitary.

These solitary bees play a vital role in pollinating plants, including many of the ones we eat. But the biology of many of these species remains poorly understood. For example, in the case of the cactus bee, it is still unclear why it normally lives a solitary life, but then amass in large numbers during this mating event.

Learning more about where, when and how these amazing creatures mate will help protect them and in turn contribute to our fight to protect the planet from human impacts and rapid climate change.

Dr. Doug Gurr, director of the museum, remarks: “Wildlife photographers give us unforgettable glimpses into the lives of wildlife, sharing never-before-seen details, fascinating behaviors and frontline reporting on climate and biodiversity crises. . “These images demonstrate their admiration and appreciation for the natural world and the urgent need for action to protect it.”

Now let’s move on to the Australians.

Gimesy’s photo, Wombat Lockdown, is among the top five rated films in the wildlife photojournalism category. It shows Emily Small, founder of the Goongerah Wombat Orphanage, working on a couch during the Covid lockdown with two wombat orphans sleeping in a pocket.

“To help prepare them for a life in the wild, including preparing their gut with the right microbes, Emily let them munch on grass and dirt she brought from their natural habitat 450 kilometers away. , and gave them sticks to chew. But like rodent teeth, their teeth just keep growing, so they would often gnaw on things to wear them down, like his furniture,” Gimesy said. “She could only leave her apartment for about an hour every hour during this time – that was when they were napping.”

The wombats were found alive in the pouch of their mothers, who were killed by cars. The baby wombats normally went to the Goongerah Wombat Orphanage, but Small brought them home to feed them regularly during the lockdown.

Hockey, also highly regarded in the wildlife photojournalism category, captured Up to a gum treean aerial photo taken with a drone showing environmental activists examining the impact of deforestation in Tasmania.

“Calumn’s composition contrasts a single remaining tree with the devastation of the forest glade below,” the jury said. ‘Environmentalists framed in the image had climbed a Tasmanian gum oak tree to assess the damage after the old growth forest was cleared for mining.’

Hockey points out that it’s “almost 50 years since protests against dams and logging in Tasmania’s wilderness areas made headlines in Australia and then around the world.” Since then, conservationists have continued to try to stop the logging of ancient forests. Although this protest is about mining, there are many threats to Tasmania’s old growth forest, the biggest of which is logging. The image, captured off the coast of Cape Le Grand National Park in Western Australia, is part of Portelli’s ongoing intrigue with the leafy sea dragon, which can be found along the southern coasts of Australia. Australia, often hiding among seaweed and seagrass.

“Without these kelp forests, leafy sea dragons are unable to camouflage themselves or take shelter and sea lions are forced to hunt in open waters, risking attacks from great white sharks and killer whales. Scott’s dual portrait captures a rarely seen interaction between these two elusive species.

As usual, the gallery of Wildlife Photographer of the Year winners showcases some of the best work documenting wildlife. The 2022 awards attracted more than 38,000 entries from photographers from 93 countries. The top 100 entries, including photos of the three Australians, will feature in a traveling world exhibition which visits Australia each year. Previous hosts have included the Australian National Maritime Museum in Sydney and the National Woolen Museum in Geelong.

Here are some winning images. Click here to view them all.

Witches on Bikes back on Saturday |